Please ensure Javascript is enabled for purposes of website accessibility
Log In Help Join The Motley Fool
Free Article Join Over 1 Million Premium Members And Get More In-Depth Stock Guidance and Research
By Andrew Tseng - Feb 14, 2020 at 10:00AM

The company has gobs of cash, and its fastest growing businesses appear to be barely contributing profits today.

Whether you think Alphabet's (GOOGL 5.11%)(GOOG 5.20%) stock is expensive or cheap, it is much cheaper than you probably think.

Here's why: it has a ton of cash on its balance sheet, its moonshot businesses in the Other Bets segment are losing billions (but that won't last forever), and several of its big growth businesses have huge long-term potential but appear to be barely contributing profits today.

Given that Alphabet is highly profitable and generates gobs of cash, that $128 billion of "net cash" is clearly excess capital and not required to operate the business. Therefore, investors should focus less on the current stock price and more on the stock price excluding the company's net cash and investments per share.

For example, Alphabet's Class C shares are trading at $1,509 per share today, but that includes about $187 per share of net cash and investments. That means the business itself, excluding the cash, is really trading for closer to $1,322 per share. 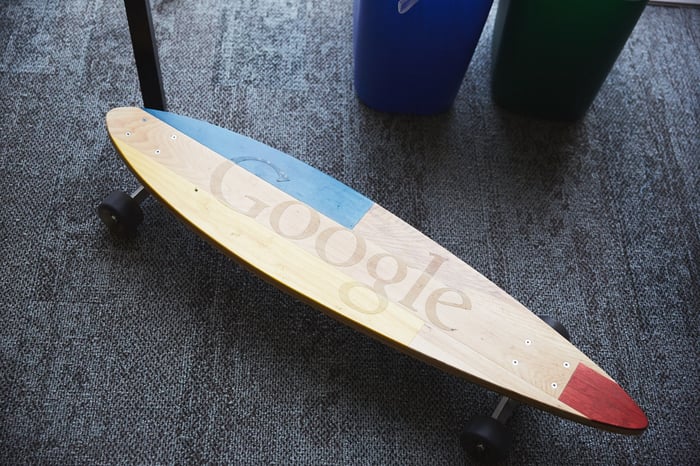 When you look under the hood of Alphabet's income statement, net income is the combination of huge profits from the core Google business, partially offset by big losses from the moonshot projects in the Other Bets segment. For example, last quarter the Google segment made over $11 billion of operating income while the Other Bets segment lost $2 billion.

But it's important to understand the distinction. Google's operating profits should be recurring in nature; in fact, they should grow over the long term. The Other Bets losses are different. Those are venture capital-like investments, not recurring operating losses.

In other words, businesses within Other Bets will either reach profitability and start contributing positively, or will be shut down or sold. Management is not going to tolerate billions in losses from the Other Bets segment forever. That's especially true given the CEO's new compensation arrangement, which ties his pay to stock price performance over the next two and three years.

That's why it makes sense to exclude the Other Bets losses when considering how profitable Alphabet is, especially in light of the greater discipline management is bringing to Other Bets, which should reduce those losses going forward.

Several of Alphabet's fastest growing businesses don't appear to be chipping in much profit yet. That means the company's reported profits today are way lower than they could be and will be in the future.

Consider Google Cloud Platform (GCP). Management does not explicitly disclose GCP's profitability, but on the last conference call, they strongly suggested GCP's current profit margins are low, or perhaps even negative. When asked whether GCP is as profitable as Amazon's (AMZN 3.58%) Amazon Web Services (AWS) was when it was the same size as GCP is today, Alphabet's CFO Ruth Porat said:

In terms of your margin question, look, I think our view is, obviously, the competitive dynamics in the cloud market are very different today. We are investing aggressively given the opportunity, which I tried to make clear in opening comments. Given the opportunity we see and the momentum we're having, we've accelerated our investment in our go-to-market team. And as we've talked about before, we've set a goal to triple the size of the sales force. We're also focused on building out our product road map and extending the global footprint of our infrastructure.

In other words, the cloud market is much more competitive today with AWS, Microsoft (MSFT 3.42%) Azure, and GCP than it was several years ago when AWS was the size that GCP is today. Back then, AWS essentially had the market to itself, didn't have to worry as much about competitive pricing pressure, and therefore had higher profit margins than GCP has today. Plus, the repeated emphasis on GCP's aggressive investment spending is a clear signal that GCP's current profits are minimal.

Consider YouTube, the global leader in user-generated video content. On the same conference call, Porat said, "...we do continue to build out our subscription services," and "It's still early days there, and we're making a sizable investment to build it out, taking a long-term view here." Any time a management team emphasizes that it's "early days" and how they are investing, that is code for "current profit margins are low."

Finally, consider the company's hardware business. Porat said, "We've been investing heavily by developing our capabilities in hardware engineering as well as building out supply and physical distribution chains." Again, that means "current profits are low."

In summary, Alphabet's "normalized" level of earnings is much higher than today's earnings, and investors will realize that once management minimizes Other Bets losses and eventually shifts gears to focus more on harvesting profits in these other businesses. That's why Alphabet is way cheaper than most investors think.