What should investors think of this promising diabetes stock?

While cutting-edge technologies such as gene-editing and cancer immunology tend to get a lot of attention in the biotech world, one of the most lucrative niches in this area comes from treating a relatively common condition. Diabetes is quickly becoming one of the most prevalent diseases in the world. Right now, 425 million people around the world are living with the condition, and estimates suggest that number will grow to 629 million by 2045.

One promising diabetes stock is Insulet (PODD -0.77%), a well-known manufacturer of insulin pumps. While there are a couple of other noteworthy players in this market, Insulet has impressed investors and analysts alike with its consistent and impressive growth figures.

Is it enough to warrant a position in your portfolio, though? Let's look at some of the details and find out. 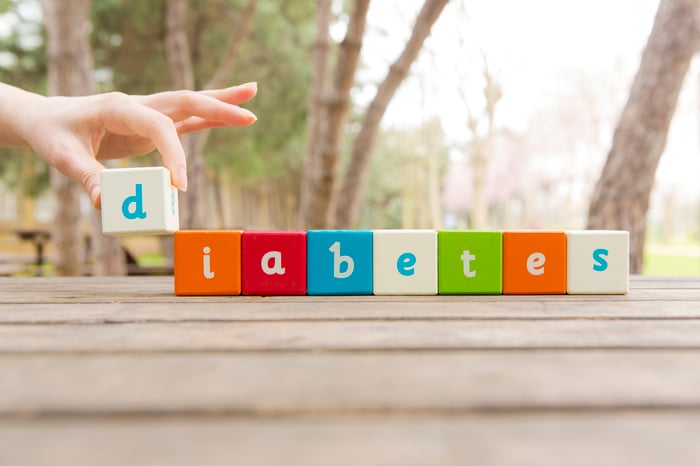 Insulin pumps help diabetes patients regulate their blood sugar levels by providing consistent doses of insulin throughout the day. Most diabetes patients aren't currently using insulin pumps, but given the convenience factor, it's expected that many patients will begin using them in the years to come.

Around 350,000 people in the U.S. are using insulin pumps; 320,000 of them have type 1 diabetes, and the remainder have type 2. Considering the severity of type 1 diabetes patients, whose pancreases are incapable of producing insulin, it makes sense that the majority of early adopters of these pumps fall in this category. However, type 2 diabetes patients can also use these pumps.

While 350,000 users may not seem like a massive number right now, the number of patients using these devices is expected to explode over the coming years. In 2018, the global insulin pump market was estimated at around $4.1 billion, but by 2025, it's predicted it will grow to $16 billion per year.

Among other reasons, there's a pretty big convenience factor that comes with using these pumps. Instead of patients having to inject themselves multiple times per day with insulin, these pumps are low maintenance and do the job for them.

Insulet is one of three major competitors in the insulin pump market; the other two companies are Medtronic (MDT -1.85%) and Tandem Diabetes Care (TNDM -3.82%). Insulet is known for its OmniPod system, which is the top tubeless insulin pump available right now. The OmniPod is both waterproof and discreet when worn under clothing.

Tandem Diabetes' t:slim X2 insulin pump isn't waterproof, requires tubing, and is much more conspicuous, so at least for now, the OmniPod is able to distinguish itself from its competitor. The biggest problem for the OmniPod is that it doesn't feature a continuous glucose monitoring (CGM) system like the t:slim does. Dexcom's CGM system is considered the top system of its kind.

Although Insulet's OmniPod doesn't come with Dexcom's monitoring system (whereas Tandem's t:slim already does), that's expected to change quickly. Insulet is planning to launch the OmniPod Horizon system later in 2020, which will incorporate the Dexcom monitor to automate insulin dosing for patients.

What's truly impressive about Insulet is its growth over the past few years. In the company's most recent Q3 2019 financial results, revenue is up 27% from last year, growing from $151.1 million to $192.1 million. Looking further back, 2017 sales came in around $121.8 million, while income in 2016 was $94.9 million. This strong trend of revenue growth is impressive and shows little sign of slowing down.

Actual profits, though, are less striking. Net income for the most recent quarter was just $900,000, whereas last year saw net income of $1.7 million. While it's common for high-growth companies such as Insulet to focus more on growth rather than profit, investors should keep in mind that this stock is barely breaking even despite its growth.

However, when we compare financial figures with Insulet's competitors, primarily Tandem Diabetes, Insulet's financial figures aren't that special. Tandem is less than half the size of Insulet and is growing at a much faster rate. Sales shot up by 105% in Q3 2019 to $94.7 million, and while Tandem reported a net loss of $2.9 million, it's a significant improvement from the $34.2 million loss seen in the previous year.

Despite growing at a slower rate than Tandem, Insulet trades at a pricier premium. Insulet's price-to-sales (P/S) ratio is currently 18.7, in comparison to Tandem's 14.8. The only other major player in the insulin pump market, Medtronic, is much larger than either Tandem or Insulet, commanding a market cap of $156.3 billion in comparison to Tandem's $4.9 billion or Insulet's $12.7 billion. However, Medtronic's P/S ratio is just 5.1, substantially cheaper than either of its two competitors (although its revenue is growing at a much smaller pace, so it's far from a perfect comparison).

The point, here, is that Insulet is definitely on the pricier side in comparison to its competitors, and it's not immediately clear what justifies this premium. While Insulet is technically profitable, it's also growing slower than some of its rivals, something that is much more important for high-growth companies in such a young market.

Is Insulet a buy?

The reality of the insulin pump market is that there's plenty of room to grow, and all of the main players in this sector are expecting growth rates to stay strong for quite some time, including Insulet. By all accounts, the company has a very bright future ahead of it.

However, compared to its competitors, it might not be the best insulin pump/diabetes stock on the market right now. If I were forced to pick just one stock in this market, I'm not sure Insulet would be it. However, that's not to say Insulet is a bad company by any means: Strong growth, a competitive product, and a very promising market make this biotech stock a buy in my book.