Please ensure Javascript is enabled for purposes of website accessibility
Log In Help Join The Motley Fool
Free Article Join Over 1 Million Premium Members And Get More In-Depth Stock Guidance and Research
By George Budwell - Feb 16, 2020 at 9:30AM

Which of these top pharma stocks is the better buy right now?

Big pharma has been an outstanding space for investors over the past five years. In fact, every single big pharma company outperformed the broader biopharmaceutical industry during this period in terms of total returns on capital, including dividends and assuming a dividend reinvestment plan. The top dogs in the industry have crushed the broader markets over the past-half decade as the result of major structural changes to their internal operations, as well as a stronger focus on developing truly innovative new products for cancer, rare diseases, and infectious diseases.

GlaxoSmithKline (GSK 0.84%) and Bristol-Myers Squibb (BMY 1.49%) have both been at the forefront of this industrywide metamorphosis. Glaxo is in the process of spinning off its consumer healthcare joint venture with Pfizer, and the British pharma giant has also placed a heavy emphasis on the clinical development of cutting-edge cancer drugs of late. Bristol, on the other hand, recently bulked up by acquiring top cancer and immunology specialist Celgene. So with these two big pharmas entering a new phase in their respective life cycles, it's arguably the perfect time to consider which stock has the better long-term prospects. Let's check out how Glaxo and Bristol stack up on several key areas to find out. 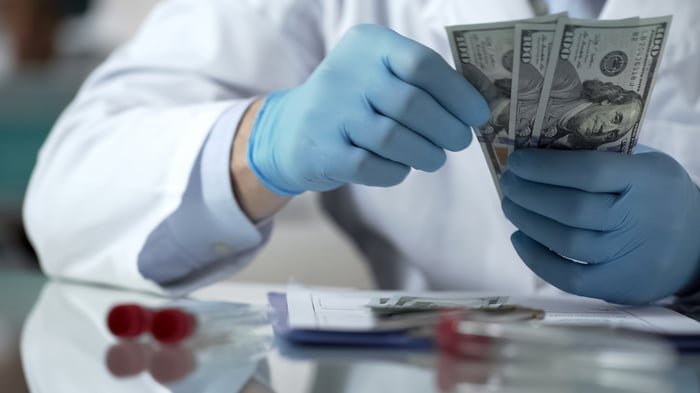 Glaxo is currently passing through a period of major change. The pharma titan is presently gearing up to hive off non-core business segments such as consumer healthcare and possibly its dermatology business as well. By doing so, Glaxo intends to place a stronger spotlight on its bevy of growth assets in respiratory, oncology, HIV, and vaccines. Another key element of this ongoing metamorphosis is the drugmaker's renewed focus on next-generation technologies like functional genomics, which should speed up the process of drug discovery and development.

Thus, Glaxo is slowly but surely moving toward becoming a leaner, more efficient biopharma-centric company. That's an encouraging development following Glaxo's less-than-stellar showing in the prior decade, a rather dark period in the company's history characterized by bribery scandals, numerous clinical failures, and an inability to move the investing narrative beyond the eventual decline of megablockbuster respiratory medicine Advair.

What's the next step? While Pfizer and Glaxo have yet to agree on a timeline for the official launch of their consumer healthcare business as a standalone unit, this seminal event should take place by no later than 2024. As part of this seismic shift in the company's underlying business, Glaxo plans on continuing to divest certain noncore assets to both offset the costs associated with this upcoming consumer healthcare spinoff, and presumably to assuage regulators in the U.S. and EU.

As a direct consequence of this spinoff, Glaxo seems poised to remain fairly dormant on the merger-and-acquisition scene over the next few years. The drugmaker might strike more partnering deals similar to its oncology alliance with Merck KGaA, but another high-dollar acquisition, in the same vein as the Tesaro buyout, is probably off the table until this spinoff is complete. After all, Glaxo probably can't take on much more debt without severe consequences for its credit rating. The company, in fact, currently sports one of the most highly levered balance sheets among its big-pharma peer group.

In turn, Glaxo's primary value creator for the next few years will probably be its clinical pipeline. Fortunately, the company's R&D engine has turned into a source of strength under its new leadership team, with several major regulatory decisions in oncology, HIV, and respiratory medicines, among others, slated to take place later this year.

This heavy reliance on experimental-stage assets for future growth does have one major downside, however. In short, there's no realistic way to accurately forecast the drugmaker's top-line growth over the next three to five years. Unfortunately, Wall Street is rarely comfortable with high levels of uncertainity on the revenue side of the equation, especially when it comes to industry megagiants like Glaxo.

The case for Bristol

Bristol's acquisition of biotech heavyweight Celgene has proved to be a game-changer for the company. Underscoring this point, the big pharma's latest quarterly results absolutely clobbered Wall Street's expectations because of Celgene's high-growth product portfolio. Looking ahead, this recent megamerger should continue to pay dividends for the big pharma for two clear-cut reasons.

First and foremost, Bristol now sports a whopping eight blockbuster products after this tie-up. Moreover, its powerhouse immunotherapy Opdivo will no longer have to do the bulk of the heavy lifting from a growth standpoint. That's key, because Opdivo's sales have started to taper off lately. In fact, it may never regain its status as a top-tier growth product because of fierce competition from Merck's Keytruda, as well as a host of other immunotherapies.

Second, Bristol's clinical pipeline got a major injection of talent with this Celgene acquisition. In the near future, the company is expected to gain several regulatory approvals for potential blockbusters like blood disorder treatment Reblozyl, as well as anti-cancer cell therapies bb2121 and liso-cel (aka JCAR017). So, if anything, Bristol's growth engine should only continue to pick up steam in the years ahead.

There is one major drawback associated with this megamerger. Bristol's balance sheet is now highly levered as a result of this deal. Now, the big pharma is planning on reducing its debt in a big way this year. To do so, though, it may have to miss out on other value-creating M&A opportunities. That's not the end of the world, to be sure, but it's always a good thing to have flexibility when it comes to business development opportunities.

Although both companies could turn out to be outstanding long-term investing vehicles, Bristol's stock stands out as the better pick right now. Glaxo's shape-shifting endeavor has yet to take a solid form, whereas Bristol is sitting pretty thanks to its decision to go big by acquiring Celgene last year.

Bristol thus comes across as a low-risk, high-reward investing vehicle as things stand now. The same can't exactly be said for Glaxo at this stage of the game.