Please ensure Javascript is enabled for purposes of website accessibility
Log In Help Join The Motley Fool
Free Article Join Over 1 Million Premium Members And Get More In-Depth Stock Guidance and Research
By Donna Fuscaldo - Feb 18, 2020 at 8:00AM

Microsoft's shares are surging but there's room for more upside. It's not only the cloud business that's driving the growth.

With such a run-up in shares, some investors may think shares can't go any higher. But with a cloud business that's booming, a new Windows 10 OS slated for this year, and perceived stability in a time of increasing uncertainty, there are numerous reasons why Microsoft's stock is poised to move even higher. 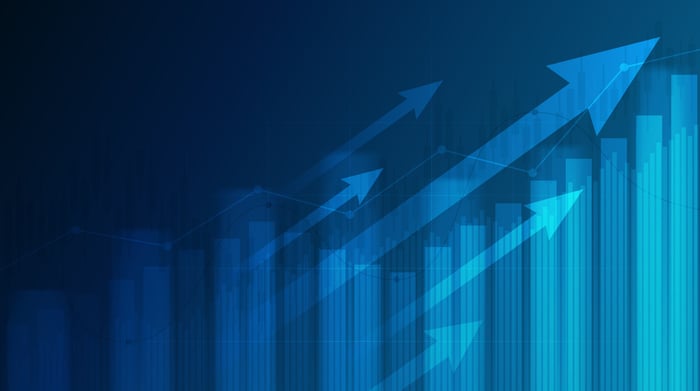 1. The cloud business is on fire

Take Microsoft's cloud business for starters. Its Azure cloud has been driving significant growth for the company. In fiscal Q2, Azure revenue jumped 62%, helped by a multi-year, $10 billion Pentagon contract Microsoft inked during the quarter. The contract, which is being contested by rival Amazon , gives Microsoft an entrance into the federal government, which is in the process of digitizing its data and consolidating its cloud vendors. The government is a big opportunity for Microsoft to expand its cloud business. It also landed Salesforce as a cloud customer, further driving growth.

Microsoft is still a small player in the cloud market when compared to Amazon Web Services, but it is slowly and methodically closing the gap. Winning the Pentagon contract, which was expected to go to AWS, underscores its growing reputation in the industry. But gaining market share won't matter as much as creating reasons to use the cloud will. The companies that can boost cloud usage will be the ones that emerge victoriously.

Microsoft's CEO seems to get that. During the company's earnings conference call Satya Nadella laid out his vision over the next decade: "The defining secular trend will be the increasing rate of digitization of people, places and things. This malleable power of software will drive productivity growth across all industries, leading to more inclusive economic growth far beyond the domains of consumer tech today," he said. If his vision proves correct, there's a lot more upside left in Microsoft's stock.

2. Dual-screen devices on the horizon

For months Microsoft has been teasing Windows 10X, a massive overhaul of the Windows 10 operating system to support dual-screen devices. A big upgrade with the new OS is the ability for users to install updates in less than 90 seconds with one reboot. Microsoft also released development tools so developers can begin building dual-screen apps running on the new OS. The OS is aimed at supporting the Surface Neo and Surface Duo, the two foldable devices Microsoft is launching just in time for the holiday season. The Surface Neo is a foldable tablet while the Surface Duo is a mobile device. The latter marks Microsoft's reentrance into the mobile phone market.

If the foldable device market takes off, Microsoft can benefit two-fold. It can license its Windows 10X OS to computer and device manufacturers. It can also develop its own mobile devices that run on the Windows 10X OS. The market appears to be heading the way of foldables. This week Samsung rolled out its Galaxy Z Flip phone, which is a foldable phone that closes like an old-school flip phone but opens into a full phone with a 6.7-inch OLED display. Market research firm Gartner predicts there will be 30 million foldable phones in the market by 2023, accounting for 5% of the high-end mobile phone market.

3. A shift to quality

Whether it's coronavirus or trade wars, there's a lot of uncertainty in the markets. That's particularly true for tech stocks, which have exposure to Asia. One company that isn't too impacted by it all, however, is Microsoft. Sure, it has staff in China, but it doesn't have a slew of retail locations or suppliers it relies on in the region. It's one of the reasons shares have held amid coronavirus fears.

Outside of the coronavirus epidemic, its recurring subscription-based revenue gives investors stability. In a slowing economy, companies serving enterprises tend to do better than consumer-facing ones. Microsoft does have a large consumer business, but the enterprise side trumps that. Revenue from Microsoft's productivity and business processes and intelligent cloud units were $22 billion combined in the second quarter compared to $11.1 billion from its personal computing unit. Investors seeking a position in a technology stock but who can't stomach the risk may flock to Microsoft, driving up the price further.

Microsoft's stock is on a tear but there's still time to take advantage of the momentum. With business booming and promising product developments on the horizon, Microsoft should be able to continue to reward investors in the months to come.