Please ensure Javascript is enabled for purposes of website accessibility
Log In Help Join The Motley Fool
Free Article Join Over 1 Million Premium Members And Get More In-Depth Stock Guidance and Research
By Will Ebiefung - Feb 18, 2020 at 10:43AM

The cigarette maker is reeling from its disastrous investment in JUUL. But the dividend looks safe.

Shares in tobacco giant Altria (MO -0.37%) have been under pressure due to regulatory headwinds in the U.S. and challenges with its JUUL Labs vaping investment. These problems have sent the company's share price down around 20% from its 52-week high. But Altria still has an eye-catching 7.20% dividend yield that is sure to draw the attention of income hungry investors.

Does the massive payout make Altria a buy -- or is the cigarette stock best avoided like its controversial products? 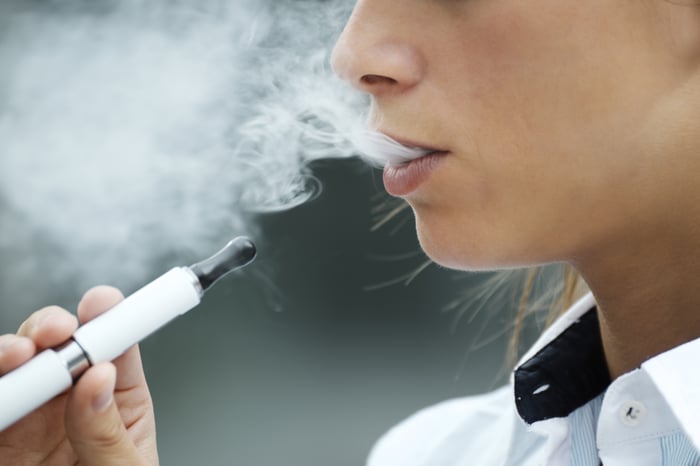 Juul is the company behind the vaping craze that shook up the American tobacco industry. Altria purchased a 35% share in the high-flying vaping start-up for $12.8 billion in December 2018. But soon after Altria's investment, the industry was hit with some serious challenges.

In August 2019, the Centers for Disease Control and Prevention and Food and Drug Administration began investigating a mysterious lung illness linked to vaping. The condition, later named e-cigarette or vaping product use-associated lung injury, or EVALI, was linked to vitamin E acetate, an additive commonly found in cannabis-based vaping products.

Juul's products do not contain vitamin E acetate or THC. And so far, there have been no direct links between Juul and EVALI. But the damage was done.

Amid the EVALI crisis, which has killed 64 people, U.S. lawmakers voted to increase the smoking age to 21. Both Altria and Juul supported the move, perhaps to distance themselves from the growing controversy surrounding teen usage of their products. In January, the FDA took things a step further by banning all fruit and mint-flavored vaping pods to discourage teen vaping.

Altria is worried about Juul's lawsuits

Altria wrote down its $12.8 billion Juul investment by taking a $4.5 billion impairment in the third quarter before impairing the investment again by $4.1 billion in the fourth quarter of fiscal 2019.

Altria devalued Juul the second time because of an 80% increase in pending lawsuits against the start-up. Altria also renegotiated the terms of its agreement with Juul -- adding two directors to its board and getting the option to release itself from a non-compete clause if the start-up's products are banned in the future.

Altria is guiding for a 4% to 6% decline in domestic cigarette sales volume because of the smoking age increase. Altria may offset the volume decline by raising prices, a strategy is has used to great effect in the past. Juul's sales growth is also expected to decelerate, but the good news is that Altria has front-loaded a lot of bad news by writing down the majority of the value of its Juul investment.

The market for e-cigarettes is still growing rapidly. This means Altria can earn equity net income from its investment if Juul's situation turns around.

Altria pays investors a $3.36 annual dividend for every share they own. At a stock price of $46, this comes out to a yield of around 7.3%. The dividend cost Altria $6.1 billion in fiscal 2019, but the company had a net loss of $1.3 billion over that same period.

With those numbers, Altria paid $4.8 billion more in dividends than it brought in as net income. This looks terrible on the surface, but there is more to the story.

While a negative payout should usually send dividend investors running for the hills, Altria's net income does not paint a full picture of its dividend's sustainability. That is because Altria recorded several massive nonrecurring charges in 2019. These were the $8.6 billion in total impairments on Juul and a $1.4 billion loss on financial instruments related to Cronos Group (CRON -13.13%)

Cronos is a Canada-based cannabinoid (CBD) company with a market cap of around $2.5 billion. Altria purchased a 45% stake for $1.8 billion in March 2019, but Cronos's stock price has fallen over 60% since the deal was announced.

Cash flow is what matters

While investors may be rightfully worried about Altria's track record of making bad strategic investments, the company's core operations are stable. And the dividend looks safe. In this case, cash flow from operating activities is a more illustrative metric of the payout's sustainability on a cash basis.

Altria generated $7.8 billion in cash from operations in 2019. With $6.1 billion in dividends paid over that period, the company's payout is equal to 78% of operating cash flow. This means the dividend is relatively well-covered on a cash basis -- even though it isn't well covered by net income.

While Altria has a negative net income payout ratio, its dividend is sustainable because it is covered by operating cash flow. The tobacco giant has committed itself to returning most of its income to shareholders, and it has grown the dividend for over a decade.

Altria's management expects to see a moderate decline in tobacco sales volume because of the smoking age increase, but the company should be able to offset this headwind by raising prices.

While Altria's ill-fated investments in vaping and cannabis are cause for concern, management remains optimistic. They expect to maintain a dividend payout ratio of 80% adjusted EPS until 2022. This guidance suggests they don't expect any more massive, multi-billion-dollar impairments in the future.