Please ensure Javascript is enabled for purposes of website accessibility
Log In Help Join The Motley Fool
Free Article Join Over 1 Million Premium Members And Get More In-Depth Stock Guidance and Research
By Nicholas Rossolillo – Feb 18, 2020 at 7:50AM

The “Internet of Things” didn’t leave the chipmaker behind in the fourth quarter -- it just got commoditized.

Connectivity and Internet of Things (IoT) chipmaker Sierra Wireless (SWIR -0.52%) put the final wrap on 2019, and it wasn't much to write home about. Sales fell again from a year ago -- as they have for the duration of 2019 -- and the initial outlook for 2020 didn't offer much in the way of hope. That runs contrary to what other chipmakers have been forecasting as of late: That the tech hardware slump that started to manifest itself in 2018 is bottoming and a return to growth is in the cards.

What's worse is that Sierra has been trying to diversify its operations with complementary IoT software, but the higher profit margins and stable business model that typically come from software have only offset declines elsewhere thus far. It is possible the business can pull itself out of this slump, but with a foggy outlook, there are more certain places to invest in the semiconductor industry at the moment. The 2010s sputter at the finish line

Fourth-quarter 2019 revenues fell 13.5% from a year ago, driven by the stubbornly declining "embedded broadband" segment -- with mobile and networking sales the primary culprit. Even IoT hardware revenues fell, offset by Sierra's main focus these days -- recurring revenue from IoT service and software. The higher margin and stable income from recurring services grew 5% to $99.1 million. However, it had a minimal effect on the business overall for the full-year period.

Also within the embedded broadband segment, product mix skewed toward lower-margin sales to the auto industry and also weighed on gross profit margin. To offset lower profits, Sierra continued to trim down on its operating expenses and reinvest those proceeds into research and development, like its work on developing the company's first 5G products to try and get in on the global 5G mobile network deployment that is now underway.

At the end of the day, though, the moves still equated to an adjusted EBITDA (earnings before interest, tax, depreciation, and amortization) of $21.1 million, compared with $55.9 million in 2018. It's disappointing that the IoT hasn't done more for Sierra. In hindsight, it's no longer surprising that hundreds of millions of new devices getting hooked up to a network -- most of them small and only needing basic data connectivity -- would drive down prices and not provide the boost to hardware sales once thought. And Sierra's gross profit margins have been trending the wrong direction for a few years, showing signs of a commoditized product portfolio. Instead, the real money is in the service and software, but so far it hasn't amounted to much. 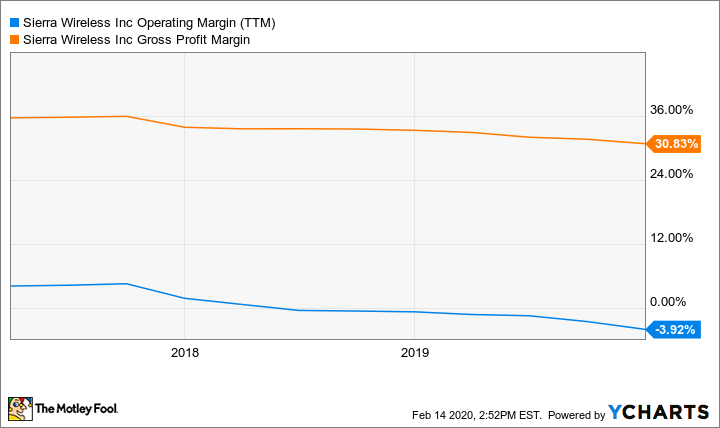 The outlook doesn't get better, at least not yet

In spite of the glum report, management reiterated that it still sees its service revenues doubling to at least $200 million by mid-2022 and doubling again to $400 million by 2024. In the meantime, though, low-margin products are still a large portion of the sales mix and in decline -- more than offsetting management's projection on the last earnings call for 25% service growth in 2020 to $125 million (including the recent acquisition of M2M Group, projecting 15% service growth excluding the takeover).

All told, the expectation is for full-year 2020 revenue to be between $690 million and $710 million, flat at best to down 3%. Gross margins should improve a bit, but adjusted EBITDA is nonetheless expected to fall again to $10 million to $15 million. Management also noted that the outlook factors in no disruption from the novel coronavirus situation in China -- an important market for both product demand and manufacturing. That's also worth keeping an eye on.

Given the outlook, I'm not interested in making a purchase. Sierra Wireless shares do trade for just 0.47 times 2020 expected sales, but 26.2 times adjusted EBITDA (which, remember, doesn't account for taxes and interest). Shares could wind up getting cheaper in the weeks following the last report and bring me back to the table, but at this point, there are semiconductor stocks in better financial shape and with more certain outlooks that I like better.