Please ensure Javascript is enabled for purposes of website accessibility
Log In Help Join The Motley Fool
Free Article Join Over 1 Million Premium Members And Get More In-Depth Stock Guidance and Research
By Rich Duprey – Feb 18, 2020 at 10:00AM

It's a surprise to no one but the retailer that the upscale service didn't catch on.

Give Walmart (WMT 1.57%) credit for continuously trying to punch up, but the retail giant really should just learn to stay in its lane. The well-heeled are just not its target demographic.

That the discount retailer is throwing in the towel on JetBlack is no surprise, as it was always doubtful its white glove concierge service would attract many customers, so maybe Walmart finally realizes its discount branding really doesn't appeal to an upscale audience. I wouldn't bet on it, but this latest experiment for busy, rich people is done anyway. 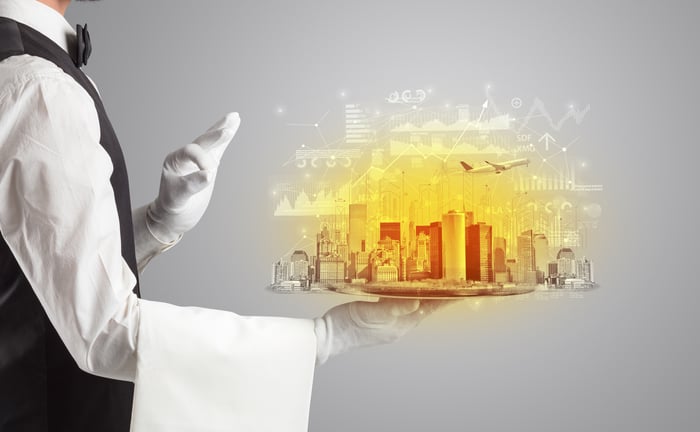 It was certainly a brash experiment for Walmart. For $50 a month, the hoity-toity could call or text the JetBlack service with the items they wanted to buy, and through a combination of artificial intelligence and personal shoppers, the retailer would search out the merchandise and deliver it free of charge.

The brainchild of Jenny Fleiss, the co-founder of the luxury fashion goods rental service Rent the Runway, JetBlack was developed within Walmart's technology incubator Store No. 8 and unleashed on Manhattan in 2018. It marked yet another attempt in a long list of efforts by the retailer to attract younger, urban, and more affluent customers.

Although Walmart has gone after this demographic several times, it has never done so very successfully.

Over a decade ago, Walmart saw the success Target was having with designer fashions and launched its own trendy clothing lines from Max Azria, Norma Kamali, and others. Walmart even opened an office in New York's fashion district.

Needless to say, it flopped. Much like the JetBlack service, consumers who buy designer clothes don't shop Walmart for them, and the large majority of its customers who look to the retail giant for the best prices on products were put off by the high prices it was charging for the designer duds.

It was forced to end that experiment and had to woo back the customers it chased away with a big marketing campaign about returning to everyday low prices.

It tried once more to get away from being the place for rock-bottom prices a few years ago by introducing dynamic pricing as a means of staying competitive with Amazon.com, but that too was a failure. Having prices fluctuate based on time of day, demand, location, competition, or buying patterns really didn't sit well with Walmart's customers, and then-CEO Doug McMillan said the retailer was going back to its roots by "playing offense with price" so it could reconnect with its customers.

While it's said the burned hand learns best, Walmart seems willing to apply the salve and try again, perpetually thinking its brand will one day appeal to the well-to-do. JetBlack was another lesson that such is not the case.

The concierge service never had more than a few hundred customers, and though Walmart's CEO Marc Lore told shareholders at the last year's annual meeting that two-thirds of the clients engaged with JetBlack weekly and spent on average $1,500 a month, they actually caused the retailer to lose $15,000 annually on each of them.

We already had a sense the end was near for JetBlack as Walmart was reportedly looking for a way out last year, deciding whether to sell it, spin it off, or partner with another business. Apparently no one else thought it was a very good idea because it's now being shut down.

Although it's admirable Walmart tries to appeal to a greater cross-section of the population, at some point it needs to realize consumers shop its stores because they're trying to get the best bang for their buck, not to have their shopping carts delivered to them on a silver platter.