Please ensure Javascript is enabled for purposes of website accessibility
Log In Help Join The Motley Fool
Free Article Join Over 1 Million Premium Members And Get More In-Depth Stock Guidance and Research
By George Budwell - Feb 18, 2020 at 9:00AM

Will OrganiGram be one of the few big winners in the legal cannabis space?

The pot wars have officially broken out in earnest. With less revenue to go around than anticipated due to structural and regulatory deficiencies in Canada, the country's top licensed producers have all had to scale back operations, cut costs, and pay close attention to their often dwindling cash positions. The net result is that this harsh economic climate has started to truly separate the wheat from the chaff. Companies like Aurora Cannabis (ACB 6.28%) and HEXO Corp. (HEXO 13.13%) have crumbled in lockstep with the legal cannabis industry as a whole, whereas Canopy Growth Corp. (CGC 10.61%) and OrganiGram Holdings Inc. (OGI 4.66%) have both proven themselves capable of swimming against the current, so to speak.

OrganiGram Holdings is a particularly interesting case for a number of reasons. Instead of stressing its balance sheet out to the max with costly acquisitions like Aurora, Canopy, and HEXO, OrganiGram has essentially stayed home in order to focus on growing great pot in a cost-efficient manner. This seemingly zen-like approach to business development has quite possibly set the company up for long-term success. The same certainly can't be said for more aggressive players like Aurora or HEXO. And even Canopy, the industry's 800-pound gorilla, has a lot of work to do to realign its operations with actual consumer demand. 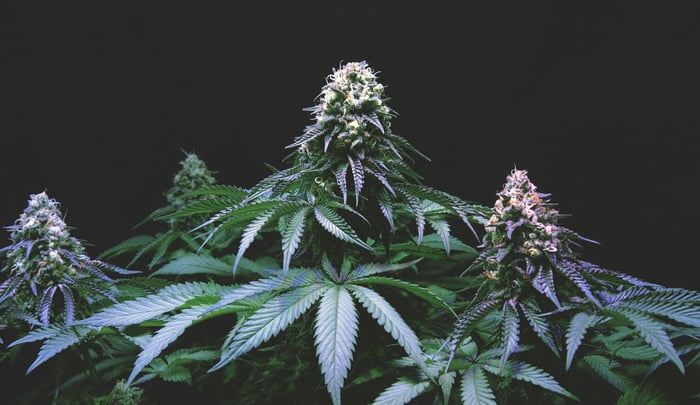 Where will OrganiGram land 10 years from now? While it's definitely a tall task to make any worthwhile predictions this far into the future, OrganiGram's foundation does offer some helpful clues. Let's break down the pot stock's core value proposition to get an idea of what may be yet to come.

OrganiGram's secret sauce is a highly efficient, three-tiered indoor growth facility at its Moncton campus located in New Brunswick, Canada. The company currently sports one of the lowest costs of cultivation in the industry, despite not having the same type of economy of scale of other giant licensed producers like Aurora or Canopy. What's more, OrganiGram's various dried flower varieties have garnered rave reviews from end users and professional critics alike. OrganiGram thus has a proven track record of growing high-quality weed without the massive overhead that comes with multiple grow sites spread out across the globe.

Additionally, OrganiGram has built an attractive lineup of derivative cannabis products. With an express interest in fully automating and streamlining the process of packaging these next-gen products, the company has successfully developed an intriguing portfolio of vapes, edible chocolates, and dissolvable powders designed to hasten the absorption of cannabinoids to within 10 to 15 minutes. Therefore, the company is well positioned to be a major player in the era of Cannabis 2.0.

The recurring theme with OrganiGram's underlying value proposition is that the company is run like a consumer packaged goods business. In effect, management places a heavy emphasis on cost controls, which should allow it to eventually turn a profit on a consistent basis with only modest gross margins. That's a key difference between OrganiGram and the rest of the field.

Under their prior management teams, Aurora and Canopy both seemed to have their sights set on generating gross margins on par with the biopharmaceutical industry -- perhaps because of the unique example set by GW Pharmaceuticals and its cannabis-derived epilepsy treatment Epidiolex. As the market has matured, however, Aurora and Canopy have both had to rethink their business plans. OrganiGram, by contrast, has always been a consumer packaged goods company at its very core.

What does this all mean? OrganiGram has the leadership and execution to outlast perhaps all of its closest peers. So, by the middle of the decade, the company should be able to dramatically increase its share of the domestic Canadian market, giving it a solid base of operations for long-term growth. In 10 years, OrganiGram thus stands an outstanding shot at being one of the country's preeminent cannabis players, perhaps with a global reach. That's a testament to the immense power of building a company for sustainable levels of growth over the long term.

Should cannabis investors buy and hold this name?

There aren't many pot stocks worth owning right now. But OrganiGram might be one of the rare exceptions. That said, investors should have realistic expectations for OrganiGram's stock in the near term. The plain truth is that several cannabis companies need to go bankrupt before any of the remaining players can spread their wings. Once the inevitable wave of bankruptcies does happen, though, OrganiGram's key competitive advantages should bear fruit for patient investors in a big way.