Taking heed of the adage, "if you can't stand the heat get out of the kitchen," meal-kit delivery specialist Blue Apron (NYSE:APRN) announced Tuesday that it was pursuing a range of "strategic alternatives" to enhance shareholder value, including a possible sale of the company or a merger with an industry peer.

Although Blue Apron was a pioneer in its niche, popularizing the delivery of healthy, ready-to-cook meals for time-constrained consumers, it quickly became clear that it would be difficult to keep customers coming back for its expensive packages.

Moreover, as other companies entered the market -- including supermarket giants such as Kroger and Walmart, which stocked their own meal kits lines in their stores' refrigerated cases, and at significantly lower prices -- the weaknesses of a delivery-based business model became apparent. 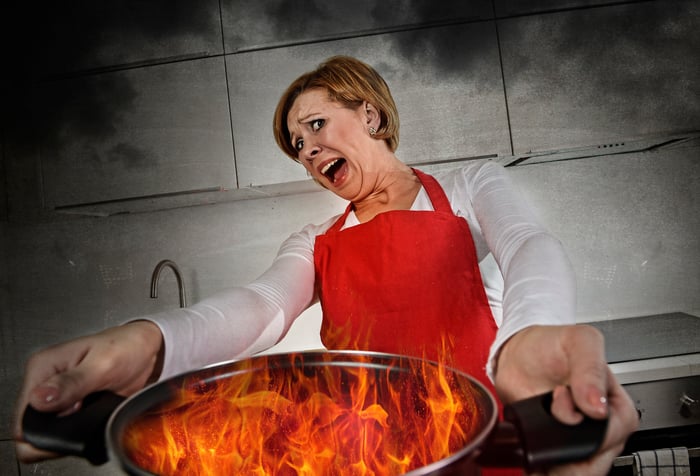 An orderly exit from relevance

The fourth-quarter earnings results were predictable. Blue Apron's net revenue tumbled 33% to $94.3 million, the third consecutive quarter it lost a third of its revenue. Worse, it continued to hemorrhage customers, losing 35,000 in the last three months, and more than 200,000 in the past year.

Incredibly, this has been by design. Management decided the company should narrow its focus to just its core customers, and in that regard, its efforts have actually been successful.

Average order value rose sequentially to $58.16, the number of orders per customer increased to 4.6, and average revenue per customer jumped to $269. But transforming your company into a small, niche business is not the type of plan that attracts investors.

It was almost a foregone conclusion Blue Apron would have to pursue strategic alternatives, but who if anyone might be willing to buy a company that is trying to dramatically shrink itself remains unclear.