Just about everything went right for the GPS device giant based on its fourth-quarter earnings report.

Garmin (GRMN 0.71%) investors were optimistic heading into the GPS device giant's fourth-quarter earnings report. But the holiday season carries extra risks, including that consumers will flock toward competing products in the smartwatch and fitness tracker spaces.

However, the company on Wednesday revealed good news across the board on the operating and financial sides of the business while predicting another record sales year ahead. Let's take a closer look at those results. 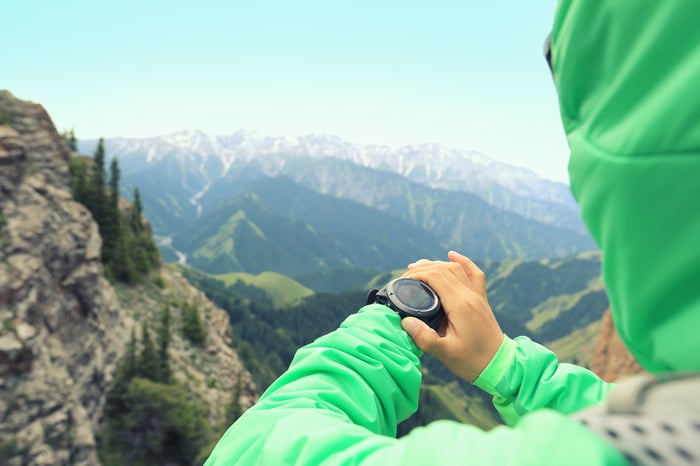 Garmin beat the upgraded outlook it issued last quarter, with sales rising 18% to $1.1 billion. That success translated into a 12% boost for the full year as revenue landed at $3.76 billion. Management had originally forecast $3.5 billion in 2019 sales and increased that prediction to $3.65 billion back in November.

The company continued to post sinking results in its automotive segment, but those declines were offset by surging demand in the fitness tracker and smartwatch niches. Its marine segment enjoyed some of its fastest growth of the year, too, rising 22% to $116 million.

The fitness segment grew at that same pace for the wider year and is now a $1 billion annual business on its own. "2019 was another exciting year of growth," CEO Cliff Pemble said in a press release, "thanks to our strong lineup of products and unique innovations."

Garmin's finances were just as impressive as its robust sales growth over the holidays. Gross profit margin ticked down, but operating margin rose for both the quarter and the year. In fact, the company's 25.2% bottom-line margin (up from 23% in 2018) represented its fourth consecutive annual record. Major contributors to that streak include innovative product launches such as the Fenix smartwatch and a continued shift toward high-margin selling niches such as aircraft and marine GPS devices.

Garmin's adjusted earnings rose 21% for the year to $4.45 per share, or well above the $4.15 per share target the tech giant issued back in November.

The tech company's first 2020 outlook reflected the positive momentum that management is seeing on demand but was cautious overall. Sales are predicted to rise by about 8% to mark a slowdown from this past year's 12% spike. Garmin sees continued double-digit growth in the fitness, outdoor, and marine segments yet is predicting no growth in the aviation segment.

Earnings gains might be more muted than investors have seen in recent years as operating margin falls back down to 23% of sales, leading to a 4% profit increase compared to 2019's 21% surge. Those 2020 predictions are likely to change as Garmin gets more feedback on its product launches across its consumer and business-focused portfolios. If recent history is any guide, the GPS giant will likely boost its forecast just as it has in each of the last three years. But, for now, Garmin is assuming a slowdown in growth and significantly weaker earnings growth in 2020 even as it sets another annual sales record.