Please ensure Javascript is enabled for purposes of website accessibility
Log In Help Join The Motley Fool
Free Article Join Over 1 Million Premium Members And Get More In-Depth Stock Guidance and Research
By Aditya Raghunath - Updated Feb 19, 2020 at 9:59AM

When it comes to growth investing, the prospect of creating significant wealth is more than enticing. However, there are some stocks that underperform broader markets despite posting stellar top-line growth. One such company is Box Inc. (BOX 1.05%).

Box provides a content management platform, enabling businesses to manage enterprise content. Using its SaaS (software-as-a-service) cloud-based platform, users can easily collaborate on content with internal and external parties. The platform can also automate content-driven processes, develop custom applications, and implement data protection and compliance features. But the market has been slow to recognize its value: Here's a snapshot of Box's performance against two widely-followed exchange-traded funds (ETFs) since its initial public offering: 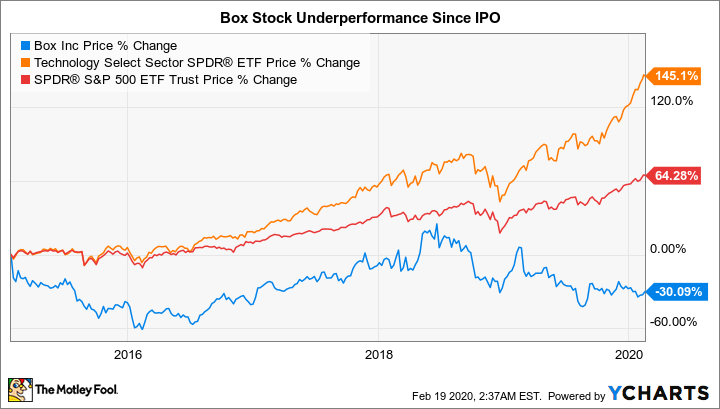 Box generates a majority of sales from the United States (about 77%) and the rest from international markets. The company has managed to increase sales from $399 million in fiscal 2017 to $608 million in 2019. However, its stock price has returned about 18% cumulatively since the start of 2017, underperforming the S&P 500 by some distance. Box went public in January 2015 at a price of $14 and is currently trading at $15.70 as of this writing.

Shares of Box were up 7% after the company announced its fiscal third-quarter 2020 results. Box reported sales of $177.2 million and negative earnings of $0.01 per share in the quarter ending in October 2019. While Box beat consensus revenue estimates by $3 million, it met Wall Street's EPS estimates in Q3.

However, the stock is down almost 16% since the end of November 2019 despite the broader markets and peer tech stocks moving closer to record highs. Will Box shares move higher in 2020 and beat overall market returns?

Box is buoyant about Box Shield -- a product company management calls a "major advancement in cloud security." With exponential growth in cloud user data, it is critical to secure this information, and Box Shield helps reduce security risk by protecting the flow of information. Furthermore, Box Shield allows easy classification of users' files and folders and can automate this process as well.

According to a Willis Tower report, human error and malicious behavior cause 90% of all cyber claims. Box Shield allows users to place security controls on their content, thereby preventing real-time data breaches. Box Shield leverages machine learning capabilities to understand how users collaborate on the platform, resulting in timely threat alerts and detection. 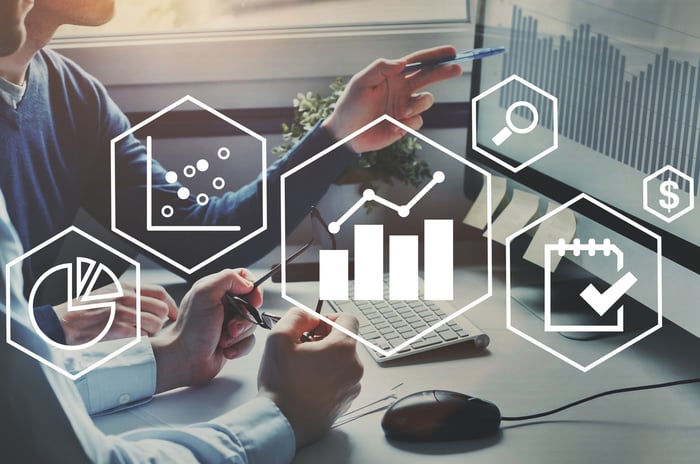 During the company's most recent earnings call, CEO Aaron Levie stated: "Unlike traditional data loss prevention tools, Box Shield is natively integrated into the flow of work that happens on Box, delivering unparalleled user experience and greater level of security controls. While we only really [introduced] Shield at the end of last month, we are already seeing more early sales traction than any other add-on product in Box's history."

One of the company's key priorities is to drive a higher volume of deals with existing customers. Box has over 1,000 customers with an annual deal value north of $100,000, which is a gain of 20% year over year.

The inclusion of Box Shield provides the company with an end-to-end content management portfolio, which will not only help in customer retention but also increase the average revenue per customer. In the third quarter, over 80% of deals over $100,000 included at least one add-on product, indicating the continuous momentum of Box's capabilities.

Another key priority for Box is to build an open platform with third-party applications. The digital transformation at the workplace needs to be supported by seamlessly connecting applications and data integration from what the company calls "disparate platforms."

Box aims to build the most open cloud content platform in the world, and the company has made product and integration updates with Microsoft Teams and Slack. These two platforms are hugely popular for real-time communication, and Box wants customers to access mission-critical content from anywhere.

Box has also partnered with Adobe, Splunk, and IBM to provide secure collaboration across customers' entire IT stack. Due to expanding capabilities, Box has claimed its cloud content management product suite is quickly gaining traction.

Box Inc. has also been recognized by market research firm's Gartner and IDC as a leader in "execution and vision" in the cloud content management space.

Box has a market cap of $2.34 billion. It has a price to sales ratio of 3.1, which is pretty reasonable considering the company's estimated double-digit growth rate in 2020 and 2021.

Box Inc. has struggled to beat market returns over the years. However, the company is well poised to increase sales within its existing customer base of Fortune 500 companies, lowering customer acquisition costs.

Its focus on creating an end-to-end content management platform, coupled with reasonable valuation metrics and an expanding clientele, may help Box stock to outperform the S&P 500 in 2020, making it one of the exciting growth stocks to bet on.