Twitter has been making efforts to improve engagement with new tools and features, which is paying off for the social media network.

Twitter (TWTR 0.73%) may not get the attention garnered by rivals Facebook and Alphabet's Google, but it should. The microblogging-platform operator has been growing its monetizable daily active user (mDAU) base by double digits, and it has product improvements to thank.

With the U.S. presidential election a few months away and the country more polarized than ever, Twitter has been trying to carve out a reputation as a safe zone in the world of social media. It has already barred political ads on its platform, and has been taking steps to improve the health of the platform by weeding out deepfake videos and other questionable content. To keep users engaged, Twitter has applied more artificial intelligence to its algorithms, serving up more relevant tweets to its millions of users.

The company is also making it easier for users to find the content they want by better organizing content around topics and events. As of the end of 2019, there were 1,700 "Topics" that Twitter users could follow, with more being added weekly. Twitter also ramped up its efforts to protect the integrity of election-related conversations, and limit the visibility of questionable content on the platform. That is resulting in a double-digit decline in reports by bystanders of tweets that violate Twitter's terms of service. 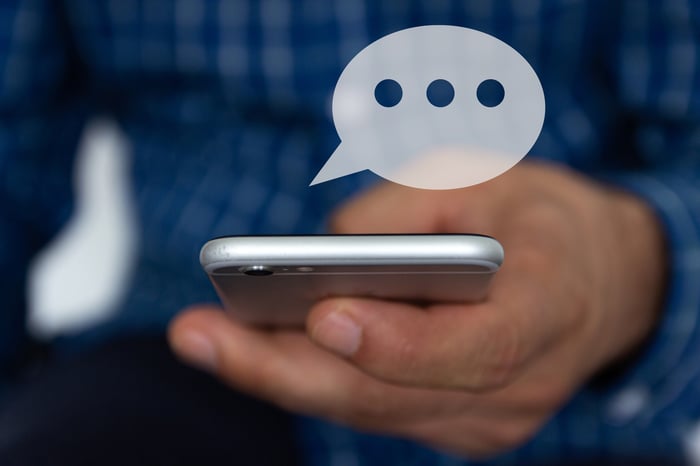 Twitter's efforts are paying off

All of those efforts appear to be paying off despite investors fears Twitter would lose advertising dollars as a result of its ban on political ads. For the fourth quarter, which Twitter posted earlier in February, it had revenue of $1.01 billion, up 11% year over year. It's the first time Twitter's revenue hit the $1 billion mark. Advertising revenue in the quarter came in at $885 million, up 12% from the fourth quarter of 2018. mDAUs increased by 21%, driven by product improvements.

The strong showing during the fourth quarter was a complete reversal from the third quarter, when Twitter's problems with its advertising platform resulted in a revenue shortfall and a decline in its share price. At the time it identified issues with its "mobile application promotion product" that prevented it from targeting ads and sharing data with advertisers. Those problems are largely behind it, but the aftermath could spill into 2020, weighing on the company's overall advertising business in the short term.

Looking out to its first quarter, Twitter said it remains focused on growing its audience and engagement. To do that, the social media network plans to continue working to increase trust and healthy public conversations. It's betting more users will flock to the social media platform if they can trust it as the election gets closer. It also thinks the trustworthy reputation Twitter is creating will drive more advertisers its way. After all, if they know their ads won't show up next to questionable tweets, they may be more inclined to spend money on the platform.

Twitter to hire more, build out a data center in 2020

During 2020 Twitter is aiming to increase its headcount by 20% or more, and warned that costs will rise the same amount. It's also pouring money into the build-out of a new data center to support its growth in audience and revenue.

While rising costs could impact Twitter's profits, the new data center should be viewed in a positive light. With the added infrastructure, Twitter will be able to develop and test products at a faster pace, which could result in more engagement and thus advertising dollars. The more product announcements Twitter has during the year, the better investors should feel about the investment, since that shows it's delivering on its commitment to provide more reasons for advertisers to join the platform.

As for the growth in daily active users, Twitter has a lot of tailwinds this year that should further boost the number of users. During the second half of the year, there's the Tokyo Olympics and the U.S. presidential election, both of which should drive daily user growth.

"We see lots of opportunity both to continue to convert people who have been infrequent users of Twitter, and to convert those who are new to the service to become people who want to use Twitter every day, to find out what's happening in the world and what people are talking about," chief financial officer Ned Segal said on a recent earnings conference call. "If you look at the breadth of the mDAU growth that we delivered this quarter, where we grew double digits in all of our top 10 markets with 15% growth in the U.S. and 23% growth internationally, we feel like that breadth demonstrates the opportunity."

While investors have been rewarding Twitter since its strong showing for the fourth quarter -- the stock is up 15% year to date -- there's still room for upside as Twitter rolls out new products and brings on more advertisers. Wall Street's average price target of $38.34 a share implies that the stock could appreciate an additional 5%. If Twitter is able to beat Wall Street estimates for the first quarter, and continues to grow its user base by double digits, there could be even more upside in the stock during 2020.