Large bank stocks are coming off one of their best years in recent memory. In 2019, the KBW Index, a benchmark index of 24 of the largest bank stocks in the country, posted nearly a 30% return. That edged out the S&P 500, which is a good representation of the market as a whole. 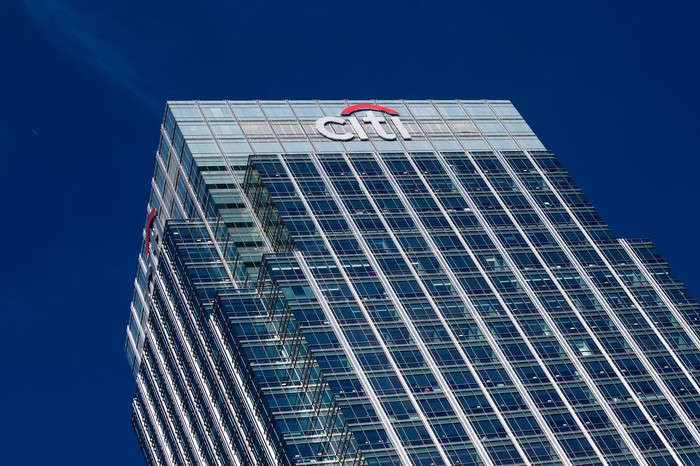 While nobody expects the market as a whole or the banking industry to lose ground in 2020, I do not think large bank stocks will outperform the market again. If anything, 2019 struck me as a long-awaited positive correction for the banking sector.

Large banks as a whole have not only enjoyed a number of clean and profitable years since the financial crisis, but also continued to grow even bigger. Stock prices have not risen in line with those profits because the financial crisis scared a lot of investors away from banking, perhaps not unwarranted.

The biggest surprise, however, occurred in 2018 when share prices at the large banks didn't react particularly positively to a new tax plan that significantly slashed the corporate tax rate went into effect. It was only a matter of time before the sector rebounded.

Bank of America CEO Brian Moynihan recently told investors that the bank's research team is projecting global GDP growth just above 3%. U.S. GDP growth will likely be only 2%, down from last year.

As Richard Parsons notes in his book, Investing In Banks, GDP growth acts as a "speed limit" for all industries. He also notes that when the economy grows at less than 2.5%, bank profits decline below historic averages.

Now add the fact that most bank margins -- the difference between the interest banks earn on loans and the interest they pay out on deposits -- have continued to shrink. Citigroup's net interest margin has bounced around a little , but Bank of America and JPMorgan's margin has trended downward for most of 2019.

There are some positives that could help banks. Tensions with China have somewhat subsided, which should lead to increased business lending, and a low interest rate environment can be great for growth. But I think this will be offset by intense competition that will force banks to cut the interest rates they charge on loans, as well as by geopolitical concerns from the upcoming presidential election.

That's why many banks are reaching for growth and profits through their credit card and wealth management businesses.

In addition, a new rule made by the Financial Accounting Standards Board went into effect for the banking industry on Jan. 1. Its impact will be felt for the first time in first-quarter earnings reports.

The current expected credit loss (CECL) rule requires banks to forecast losses on the life of a loan before they actually happen.

Under the old accounting method, banks did not book losses on loans unless some event occurred that made them believe a borrower might default or not be able to make their loan payments. Now, banks have to book the losses expected over the life of a loan as soon as loans are originated.

As a result of the new accounting policy, JPMorgan and Citigroup  both expect to see their reserves increase by a pretty significant amount, about $4 billion in total. Although those increases can be phased in over the next few years, most of the larger banks do expect higher reserve amounts starting this year, which has a direct and negative impact on earnings.

Although it's still early, the S&P 500 has opened the year up about 4%, while the KBW index is down about 3.5%. Bank of America, JPMorgan Chase, and Citigroup shares are also slightly down to begin the year.

The banking industry is coming off one of its best years ever, and while there may still be some share buybacks ahead in 2020, I think the combination of smaller margins, slower GDP growth, intense competition for growth and the upcoming election will not bode well for the sector this year.