The global pharmaceutical giant will team up with a German biotech to research and develop T-cell based therapies.

GlaxoSmithKline (GSK 2.20%) is opening yet another new front in the war on cancer. The company is partnering with a privately held clinical-stage biotech based in Germany, Immatics Biotechnologies, to develop immunotherapies aimed at eradicating a range of cancer indications.

In this strategic-collaboration arrangement, Glaxo will make an upfront payment of $50 million to Immatics. In return, it will be granted access to two cancer immunotherapy research-and-development programs being run by the German company.

After that, Immatics stands to make at least $550 million more from the Glaxo cancer partnership if and when it meets certain development, regulatory, and commercial milestones. It will also be eligible for royalty payments. Finally, Glaxo has an option to choose new programs to include as part of the two companies' overall agreement. 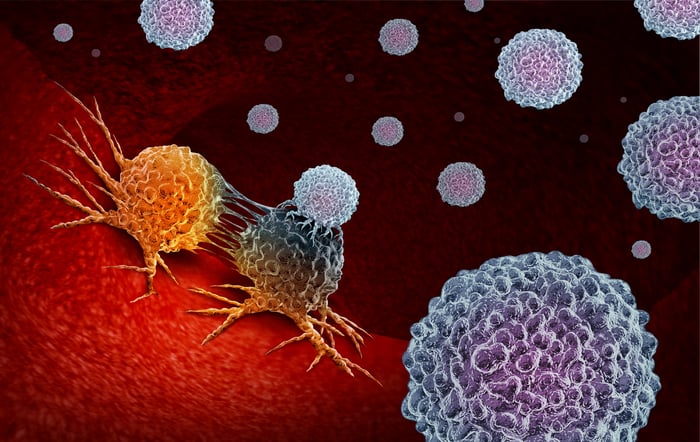 Immatics' research concentrates on Adoptive Cell Therapy (ACT), a form of immunotherapy in which T-cells, either natural or engineered, are programmed and then introduced to a patient to attack his or her cancer.

The partnership is the latest in a series of efforts made by Glaxo to boost its oncology profile. Over the past few years, its pipeline of drug candidates targeting cancer has widened significantly.

Glaxo, a top global pharmaceutical stock, closed down slightly in trading on Thursday.