Please ensure Javascript is enabled for purposes of website accessibility
Log In Help Join The Motley Fool
Free Article Join Over 1 Million Premium Members And Get More In-Depth Stock Guidance and Research
By BYRON YEE - Feb 20, 2020 at 7:12AM

Wind and sunlight are abundant, but cost-effectively storing the energy they generate for later use remains a challenge.

Renewable energy is hardly a new concept -- windmills have been used for more than 13 centuries, and I've been harnessing the power of the sun for years with solar-powered lights in my yard. However, over the past decade, major government efforts like the Paris Climate Agreement have presented ambitious plans to make our world less reliant on carbon-emitting sources of energy. Since then, wind and solar farms have been developed on a massive scale.

However, one key challenge for renewable energy is how to effectively store it to be used later, when the wind isn't blowing or the sun isn't shining. Companies that can solve that problem effectively and at scale could be big winners for investors. 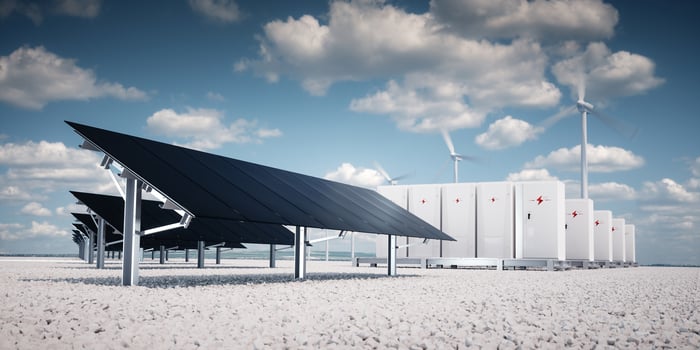 Today, traditional lithium-ion batteries are the most commonly used energy-storage technology. However, there are concerns that they aren't scalable enough to effectively turn intermittently produced renewable energy into steadily available baseload power for the grid. Among the issues are the limits of battery capacity, imperfect efficiency when releasing the stored energy to the grid, and the lifespans of batteries. Organizations like Breakthrough Energy Ventures are investing heavily in developing energy-storage alternatives that address some of those issues and may also have a lower environmental impact than batteries. Among the methods being explored are pumping water into pools or pressurized wells, storing energy as compressed air, synthesizing methane, or even stacking concrete blocks.

Who to watch in renewable energy storage

NextEra Energy (NEE 0.47%) is a Florida-based utility and a major producer of wind and solar power that's heavily investing in energy storage projects. One of its subsidiaries, NextEra Energy Resources, produces more than two-thirds of its energy from wind and solar. It currently has 140 megawatts of battery storage, and plans to add 700 megawatts to 1400 megawatts of projects over the next three years. (A 1 MW solar farm produces enough electricity to power about 1,000 homes.) While the company has mentioned research and development in non-battery storage technologies, the majority of its projects still utilize lithium-ion batteries.

The company's revenues have been fairly flat (around $16 billion annually over the past five years), however, net income and return on assets are trending upward -- even with continued spending on developing large projects. This shows these projects are indeed contributing to the company's overall profits. From a valuation standpoint, its price-to-earnings ratio of 34.47 is in line with the utility industry's average of 32.43, while its price-to-sales ratio of 6.77 is well above the industry average of 2.83. While this stock is not cheap, its ongoing investments in renewable energy and storage do seem to be paying off.

General Electric (GE 3.79%) is showing signs of a slow turnaround with a new CEO and a more-focused business strategy. GE Power continues to be a key unit for the conglomerate, with renewable energy and more importantly, energy storage offering it high potential. Back in 2018, it launched the GE Reservoir project -- at the time, the company claimed the GE Reservoir Storage Units boosted the lifespan of lithium-ion battery by 15%, increased efficiency by 5%, and lowered installation times.

Currently, there are more than 207 MWh of Reservoir projects either in operation or under construction. The renewable energy segment accounts for less than 8% of General Electric's overall revenues, and its profitability is questionable as the company took several impairment write-offs for it in 2018. However, GE stock is modestly priced (with a P/S ratio of 0.85), and given the market's hopes for the company's new leadership and direction, this may be a good time to buy before things heat up.

Tesla's (TSLA 4.01%) energy generation and storage business installed more than 1 GW of storage capacity in 2018 and set a goal of doubling that in 2019. This segment still contributes less than 10% of overall company revenue, and between 5% and 10% of net income. However, Tesla aims to become less dependent on partner Panasonic to manufacture its battery cells, and its efforts to increase battery life cannot be ignored. This stock is still terribly volatile and the company continues to struggle with profitability, however, it deserves additional attention for its energy-storage efforts.

For now, the lithium-ion battery remains the king of the hill in energy storage, and this market is expected to grow worldwide at a compound annual rate of 15.2% through 2025. In addition, the markets for key battery metals lithium, manganese, and cobalt are forecast to grow by upwards of 17.5% annually.