Please ensure Javascript is enabled for purposes of website accessibility
Log In Help Join The Motley Fool
Free Article Join Over 1 Million Premium Members And Get More In-Depth Stock Guidance and Research
By Keith Speights - Feb 21, 2020 at 7:00AM

The provider of an online health insurance exchange blew past Wall Street revenue and earnings estimates.

The online health-insurance exchange provider announced its 2019 fourth-quarter and full-year results after the market closed on Thursday. And eHealth's year is already looking even better. Here are the highlights from the company's Q4 update. 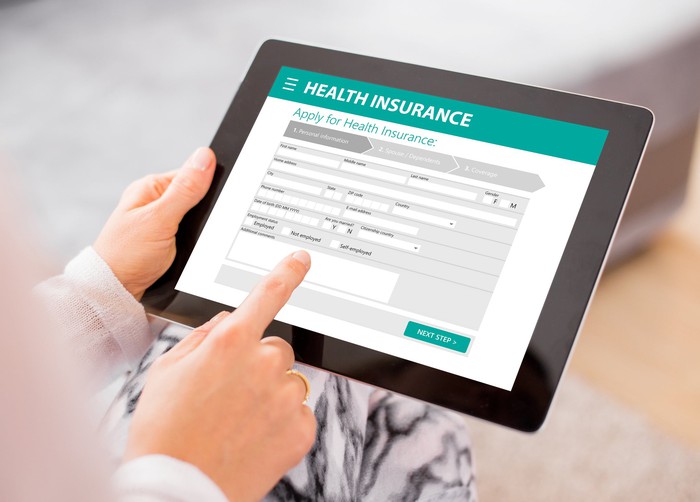 Revenue in the fourth quarter was $301.7 million, soaring 124% year over year. This result also trounced the average analyst estimate of $234.87 million.

The company announced Q4 net income of $88.8 million, or $3.58 per share, based on generally accepted accounting principles (GAAP). This represented a huge jump from GAAP earnings of $26.1 million, or $1.25 per share, posted in the same quarter of 2018.

EHealth's Q4 revenue number received a big boost from a change in estimate for expected cash commission collections. The company said that this change increased its revenue in the quarter by $50.8 million, with $42.3 million of the total related to Medicare Advantage plans that it began selling in Q3 of 2019.

That wasn't the only factor driving revenue growth, though. Medicare revenue excluding the impact of this change totaled $240.3 million in Q4, nearly double the $121.6 million from the prior-year period. In addition, eHealth reported revenue from its individual, family, and small-business segment of $19.1 million, up 44% year over year.

The key to eHealth's impressive revenue in Q4 was the company's expanding membership base. It reported that its total estimated membership as of the end of 2019 was 1,146,115 -- a 20% year-over-year jump. Medicare membership soared 46% year over year to 710,649. However, membership in eHealth's major medical individual and family plans fell 15% to 128,487.

CEO Scott Flanders said, "[W]e anticipate the momentum we have built over the past two years to continue into 2020, and we believe we are well positioned to continue outpacing the overall Medicare market growth as a result of our strong consumer value proposition, the depth of our technology platform, and our demand generation expertise."

The big question mark for eHealth this year, though, is how the presidential election might affect the company. Healthcare stocks could be especially volatile if Sen. Bernie Sanders, the current leading Democratic presidential candidate, ultimately becomes the Democratic nominee. Sen. Sanders is a vocal proponent of a single-payer healthcare system.