Please ensure Javascript is enabled for purposes of website accessibility
Log In Help Join The Motley Fool
Free Article Join Over 1 Million Premium Members And Get More In-Depth Stock Guidance and Research
By Royston Yang - Updated Feb 21, 2020 at 9:42AM

Investors who are looking for great growth stocks in the food and beverage sector should take a look at these two well-run businesses.

McDonald's (MCD -0.09%) is one of the largest and best-known fast-food brands in the world -- you can find its signature golden arches in more than 100 countries spanning five continents. However, that doesn't necessarily make it a great investment. Its flat growth in 2019 marked the first time since 2013 that total revenue rose over the previous year, and net income grew just 1.7% after a few years of improvement. The only bright spot was that the company reported its highest comparable-store sales growth in more than 10 years at 5.9%.

If you're looking for a well-established food-industry stock, cast aside McDonald's and look at these two businesses, which promise much better growth prospects. 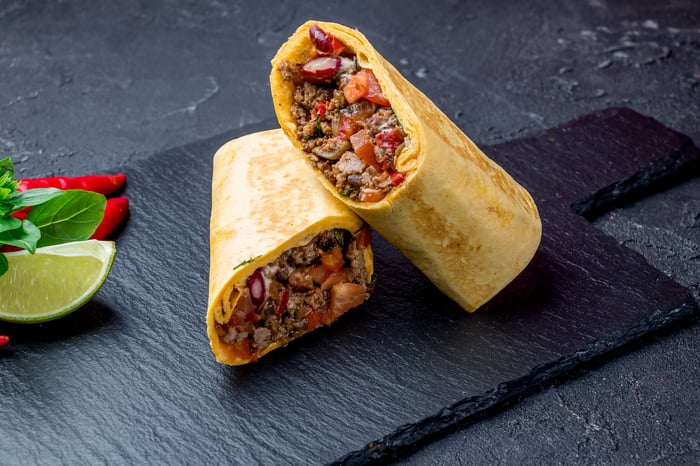 Chipotle Mexican Grill (CMG 0.31%) reported strong earnings in 2019. The company is one of the stronger players in the fast-casual dining space, and it's capitalizing on its operational strength by building "Chipotlanes" (similar to McDonald's drive-throughs) that enable hassle-free service for those who want to grab a quick bite without leaving the comfort of their cars.

Revenue increased by 14.8% year over year, while comparable-store sales improved by a staggering 11.1%. Restaurant-level operating margin continued to improve, rising 1.8 percentage points to 20.5%. Recall that Chipotle had announced a new restaurant design that it's testing out to enhance and support its growing digital sales. Digital sales for the year grew a whopping 90.3% year over year and now accounts for almost one-fifth of total sales.

The company also continued opening stores at a rapid pace, with a net 133 new restaurants. Of this number, a record 80 were opened in the fourth quarter alone. Chipotle has ambitious plans to open even more restaurants in 2020, to the tune of 150 to 165.

Operating expenses rose much slower than revenue did, resulting in operating income soaring 72% year over year and net income almost doubling to $350.2 million. Even if the effects from impairments, closure costs, and asset disposals were removed, operating profit still grew an impressive 43.7% year over year.

Starbucks (SBUX 0.23%) has grown over the years into a global coffee powerhouse, and its stores are a ubiquitous part of almost every city in America. Though the company has become a stunning $105 billion business, it still continues to post impressive growth rates. In the first quarter of its fiscal 2020, revenue grew 7% year over year, operating income jumped 20.1%, and net income rose 16.4%. Globally, comparable same-store sales growth was an impressive 5%, made up of a 3% increase in average bill size and a 2% increase in transaction volume.

The company's most promising growth market now is China. Revenue there grew 13% year over year in Q1, while store count jumped 16% to 4,292 stores. The current COVID-19 outbreak in China has prompted the authorities to temporarily shut many cafes, restaurants, malls, and tourist attractions so as to contain the spread of the virus. Starbucks has closed more than half its China stores, but this should not derail its overall growth plans.

The company's rapid growth in China, coupled with its strong customer loyalty program that's part of its digital flywheel strategy, will ensure Starbucks can continue to grow globally.

Chipotle and Starbucks are geared up for a long run of continued growth, both embracing new trends of digital ordering and plant-based products.

Though McDonald's is experimenting with replacing some of its meat options with plant-based substitutes, it only has so far it can realistically go. With many around the world embracing healthier lifestyles, this trend represents an obstacle for McDonald's future growth.

Chipotle, on the other hand, has a menu that emphasizes more vegetables, while the company has, at the same time, also introduced meatless "plant-powered" options. At Starbucks, CEO Kevin Johnson released an open letter last month promising to expand the company's plant-based options and migrate toward a more environmentally friendly menu. Overall, these two companies show a more sustained commitment and ability to shift to plant-based alternatives.

I strongly believe that both Chipotle and Starbucks can continue to grow and expand their businesses, and investors who share the same optimism should consider these two stocks.