Chipotle Mexican Grill (NYSE:CMG) has grown steadily over the years with a total of 2,546 stores at the end of September 2019. The burrito and taco specialist dishes up delicious meals in its casual dining outlets located all over the U.S. Its financial results have also been tasty with a 14% year-over-year increase in revenue for the first nine months of 2019. Operating income surged 58% year over year, while net income soared 92% as well.

Chipotle, in its most recent earnings call, also reported its seventh consecutive quarter of accelerating comparable sales. Restaurant margins are also doing much better at 20.8%, up 210 basis points from the same period last year. The numbers and operating statistics point to a solid performance for the company, and Chipotle is on track to deliver on its five key strategies: making the brand more visible, running successful restaurants with great food, leveraging digital lines to grow sales, engaging customers with a new loyalty program, and creating a stage-gate process for innovations. These attributes have made Chipotle a great food stock to own over the last 10 years, as its share price has risen tenfold since mid-2009.

The company recently announced a new restaurant design to better support its burgeoning digital sales. Will this help to further boost digital and overall growth for Chipotle? 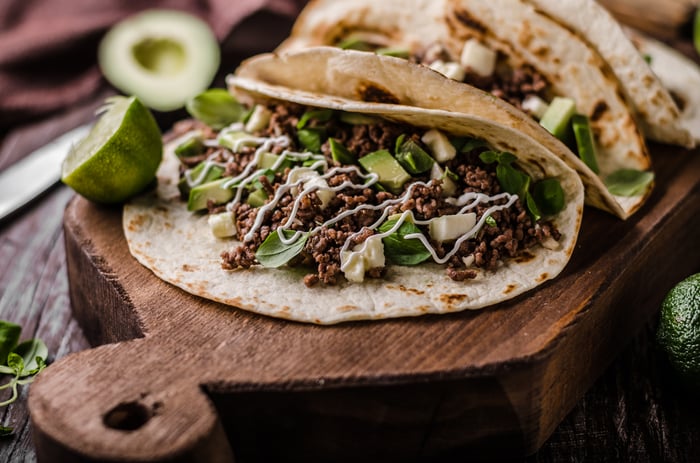 Trying out the new design

The new design involves installing new in-restaurant features to help reduce friction and increase convenience for customers and delivery drivers. This new design will be tested in four new restaurants: two endcap units with a Chipotlane (both in Chicago) and two locations in Phoenix.

The company will assess the performance of each restaurant fitted with the new trial features, based on customer feedback, transactions, and the ability to incorporate future menu additions, among other metrics. The "winning" design will then be rolled out nationally.

Digital sales are now hitting 18.3% of total revenue and were up a whopping 87.9% year over year in the third quarter. For the first nine months of 2019, sales through digital platforms accounted for 17.5% of revenue, or around $725 million, up from 10.2% of revenue for the first nine months of 2018. With such impressive numbers, it's no wonder the company is focusing more resources on growing its digital capabilities.

Recall, too, that Chipotle had rolled out its "Smarter Pickup Times" technology to all its restaurants that offered digital ordering back in February 2017. This technology had enhanced the customer order process by cutting down waiting times and providing more accurate pickup times, thereby smoothing out online order fulfillment and eliminating pain points for the customer.

It looks as though Chipotle is replicating the same type of monitoring system on the new trial design in order to gauge its effectiveness. It's encouraging to see management's focus on building up the company's digital capabilities and being receptive to customer feedback.

Momentum has been building up for Chipotle, and its financial results show that the company has been doing the right thing in growing same-store sales and overall revenue. If this new restaurant design works well, it could significantly boost digital sales (both in absolute terms and as a percentage of total sales) and help Chipotle achieve its target of making digital sales a billion-dollar business.

Investors should look forward to the company's upcoming full-year 2019 earnings to get an update on this initiative and to hear about other plans from the company's next phase of growth.