Please ensure Javascript is enabled for purposes of website accessibility
Log In Help Join The Motley Fool
Free Article Join Over 1 Million Premium Members And Get More In-Depth Stock Guidance and Research
By Adam Levy – Feb 21, 2020 at 8:40AM

DISH Network (DISH -4.59%) was one of the first companies to see the potential for streaming video to become a full replacement for the traditional cable bundle. The satellite TV company launched Sling TV at the start of 2015. Less than five years later, its subscriber count peaked around 2.7 million. The pioneering virtual multichannel video programming distributor (MVPD) lost 94,000 subscribers in the fourth quarter.

Meanwhile, technology has opened the door for new competitors to enter a market that previously required huge amounts of capital expenses just to get started. Hulu, which is now majority-owned by Disney (DIS -1.96%), and YouTube, the Alphabet (GOOG -2.63%) (GOOGL -2.63%) subsidiary, have both seen marked success. In fact, both are growing rapidly while the services from legacy pay-TV providers flounder. And there's no reason investors should expect the trend of technology-focused companies outperforming legacy pay-TV providers to end. 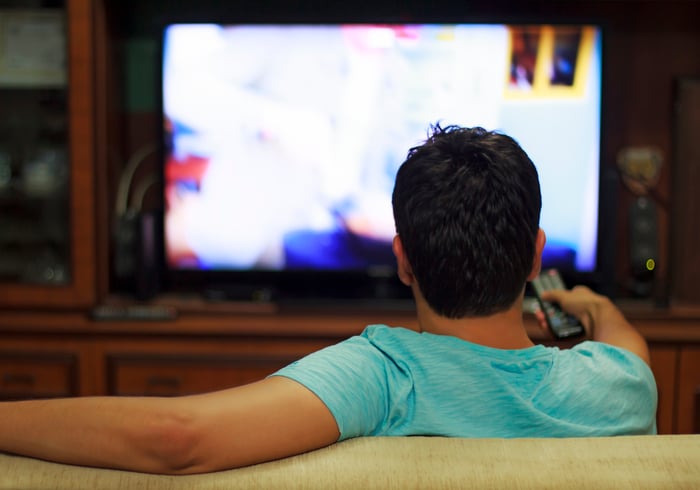 Disney disclosed official subscriber numbers for Hulu in its most recent quarterly earnings report. The company's 2.5-year-old live TV service reached 3.2 million subscribers by the end of 2019. That's an additional 1.5 million from the end of 2018. Hulu + Live TV grew bigger than either AT&T TV Now or Sling TV ever were -- and it got there faster, too.

Granted, both Hulu and YouTube are well-established brands. But so are DISH Network and AT&T. Moreover, complete upstarts have found success, too. MoffettNathanson estimates smaller competitors like FuboTV, Philo, and VidGo combine to have around 1.25 million subscribers, which is bigger than AT&T TV Now.

The success of Hulu, YouTube, and other competitors compared to DISH and AT&T stems from two factors.

First, the companies with strengths in developing technology and good user experiences have a competitive advantage over companies that might already have strong relationships with media companies. It seems there's a lower barrier to entry for the latter. Companies that are strong at both -- like Hulu -- are best positioned to win market share.

Second, Hulu and YouTube don't have to worry about cannibalizing their existing businesses. AT&T and DISH have to balance their bundles and pricing against their legacy pay-TV bundles. The offer must be attractive enough to retain customers that would cancel their subscriptions, but not so strong that they negatively impact operating profits from existing packages. Meanwhile, YouTube and Hulu can create the best product at the best price possible without any impact on existing operations. That typically results in a more consumer-focused product.

It's no surprise then that AT&T -- which was previously the largest pay-TV provider in the U.S. -- has struggled to find the right combination of networks and pricing for its live TV streaming service. DISH, in an effort to keep its prices for Sling TV low and the differentiation between Sling TV and DISH Network high, didn't renew its contract to carry regional sports networks. And while it sustained subscriber growth through the third quarter, it started to lose subscribers in Q4. Furthermore, it's been aggressive with pricing promotions in early 2020, suggesting it might still be struggling to attract new subscribers.

Analysis of cord-cutting typically focuses on the migration from pay-TV subscribers to subscription video on demand (SVOD) subscribers. Several media companies, including AT&T's WarnerMedia, are investing billions of dollars in streaming content, technology, and marketing for new SVOD services in order to capitalize on that shift.

But the ability for new companies to compete more directly with pay-TV providers through live-TV streaming -- and compete very successfully at that -- is a bigger threat. SVOD services can be a complement to a pay-TV subscription, but a subscription to Hulu + Live TV or YouTube TV is a complete replacement. The acceleration in both Hulu's and YouTube's subscriber growth in 2019 ought to be seen as a massive threat to traditional pay-TV providers.

After all, there are now over 5 million subscribers to pay-TV services that didn't even exist three years ago. Those are subscribers that might otherwise still be paying a regular cable bill.