Please ensure Javascript is enabled for purposes of website accessibility
Log In Help Join The Motley Fool
Free Article Join Over 1 Million Premium Members And Get More In-Depth Stock Guidance and Research
By Mark Prvulovic – Feb 22, 2020 at 7:46AM

Which of these two small-cap gene-editing stocks is a better investment?

Investors looking for high-growth, high-risk investments in the most cutting-edge areas of biotech should consider the world of gene editing. While there aren't many companies in this market to choose from, the few stocks that are dedicated to developing gene-editing drugs have massive growth potential.

Both Editas Medicine (EDIT 5.03%) and Intellia Therapeutics (NTLA 9.04%) are testing a number of gene-editing drugs that could prove to be game-changers for patients. However, that's not to say that there aren't any risks involved in investing in these companies. If you had to pick just one of these two small-cap biotech stocks, which should you go for? 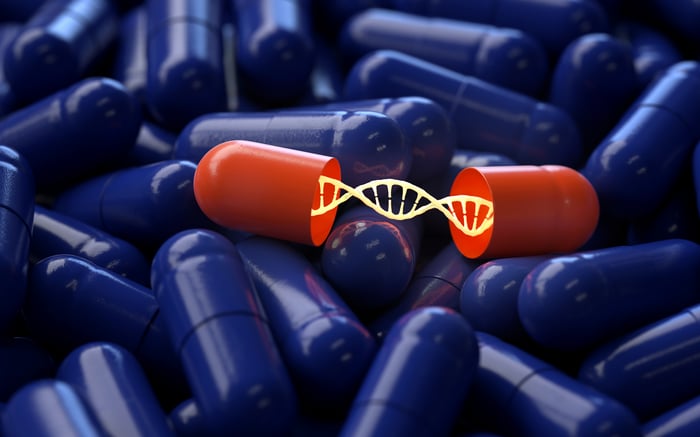 Maybe the best way to start evaluating these two companies is by looking at their pipelines. Editas has 11 drug candidates in the works right now, although only four are in preclinical testing and just one has advanced to early clinical tests.

The company's flagship drug candidate is EDIT-101, which targets a rare form of blindness in children called leber congenital amaurosis (LCA). This is a rare genetic disorder that begins early in a child's life and affects the retina of the eye, the part responsible for color and light. As the condition progresses, newborn infants experience a severe loss of eyesight, which often leads to blindness. LCA affects two to three newborns per 100,000.

Although there is a treatment on the market for this condition, it's only for a very specific type of LCA. The drug in question -- known as Luxturna -- also carries an $850,000 price tag to treat both eyes, which makes sense given the severity of the condition. EDIT-101, on the other hand, seeks to treat all variants of LCA, rather than the one specific type that Luxturna treats.

Assuming that Editas prices EDIT-101 somewhere near or slightly below the $850,000 price tag of Luxturna, the company would need to treat just 1,300 LCA patients each year for the drug to generate a billion dollars in annual revenue. That's definitely possible, and even half of that would be considered a home run for a company like Editas.

Editas also has a sickle-cell disease and transfusion-dependent beta-thalassemia (TDT) drug known as EDIT-301. These two blood disorders affect the blood's capacity to deliver oxygen throughout the body, which leads to symptoms such as fatigue, anemia, pain, frequent infections, and delayed growth in children and young adults.

At the moment, there are no treatments that can cure either of these conditions. While adults can often manage their symptoms, children are especially vulnerable to these disorders. Approximately 100,000 patients in the U.S. have sickle cell disease, while one in 100,000 individuals (around 3,300 people in America) have TDT. 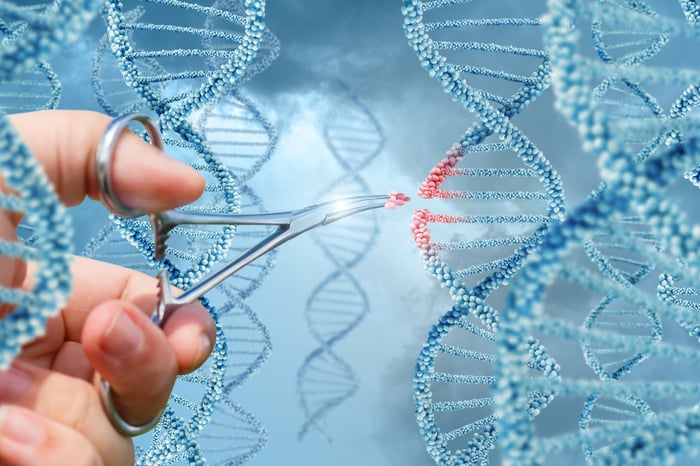 In total, Intellia has seven drug candidates in its pipeline. None of them are in clinical testing as of yet, although two are on the cusp of getting started. One of these is also a sickle-cell disease/TDT drug. While there's no official name for the program at the moment, the company lists the drug as being close to moving on to early clinical tests soon.

Intellia's next notable candidate is called NTLA-2001, a treatment for transthyretin amyloidosis, which is a rare condition where deposits of protein buildups (known as amyloids) occur in the organs and tissues of the body. This also includes the nervous system, with many patients suffering from a loss of feeling in their extremities. Transthyretin amyloidosis is quite rare, with some estimates saying that one in 100,000 people gets diagnosed with the condition.

The last-named drug in Intellia's lineup is NTLA-5001, which targets a type of cancer known as acute myeloid leukemia (AML). Unlike the other relatively rare conditions that Intellia's other drugs target, AML is quite common. About 32% of all adult leukemia cases fall under the AML classification. However, there are a number of treatments already approved for patients with AML, so NTLA-5001 would still face some competition if it ends up going to market.

From a financial perspective, both Intellia and Editas are in a similar position. Both companies are reporting losses while they develop their drug candidates, relying on their strong cash positions to fund their operations for the next few years.

Editas reported revenue of $3.8 million in its most recent third-quarter 2019 quarterly results. This is entirely from collaboration revenues; however, it has gone down significantly from last year's $14.5 million. Net losses have also doubled since Q3 2018, growing from $15.2 million to $32.9 million. Editas's cash position is sitting at a comfy $332.6 million, enough to last it two-and-a-half years at current expenditure levels.

It's a similar story with Intellia. The company reported $10.6 million in Q3 2019 revenue, also primarily from collaboration agreements. Net losses for the quarter came in at $23.6 million, while the company's cash position of $295.8 million is enough to last Intellia about three years.

Overall, the financial situation of both companies remains pretty much the same. However, Editas commands a market valuation of $1.38 billion, over twice the $678 million market cap of Intellia. The reason for this becomes clearer after looking at Editas' portfolio of patents and other intellectual property.

Editas has one of the most impressive patent portfolios among its peers, with the 70 patents so far and another 600 applications still pending. At the same time, Editas has exclusive access to technology developed by Harvard, MIT, and the Broad Institute. While Editas and Intellia might have similarly sized portfolios at present, Editas could end up having more success developing new treatments in the future due to its technology and patent advantage.

While Intellia definitely holds promise, I still think Editas has an edge. Although both companies are in a similar financial situation right now, Editas' top drug candidate, EDIT-101, has major blockbuster potential and is already moving ahead in clinical trials. Couple that with Editas' patent portfolio and exclusive access to top technology, and the long-term potential for Editas seems more appealing than it is for Intellia.