Please ensure Javascript is enabled for purposes of website accessibility
Log In Help Join The Motley Fool
Free Article Join Over 1 Million Premium Members And Get More In-Depth Stock Guidance and Research
By Keith Speights - Feb 23, 2020 at 6:31AM

It's not just their cancer treatments that make these stocks attractive.

There has been so much progress in treating cancer in just the past 10 years that it could make your head spin. Researchers have identified new ways to fight cancer -- and new ways to diagnose cancer more effectively, too.

Close to $150 billion will likely be spent on cancer drugs this year. This creates lots of opportunities for investors. But which cancer treatment stocks are the top picks right now? Here's why I think that bluebird bio (BLUE 2.80%), Bristol-Myers Squibb (BMY 1.64%), and Intuitive Surgical (ISRG 2.53%) especially stand out. 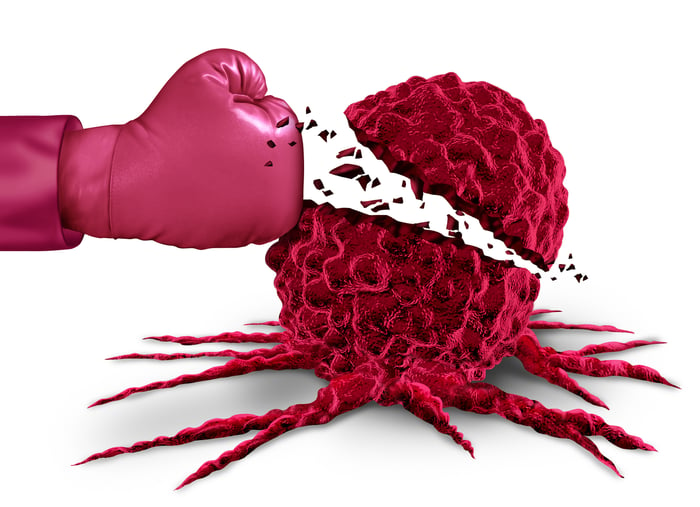 I recently include Bluebird on my list of the three best biotech stocks to buy for the next decade. This list was admittedly a stretch since it's impossible to accurately predict how any stocks will perform in the future. That's especially true for biotech stocks.

However, there are several reasons Bluebird could fly significantly higher. For one thing, the company recently lauched its first product, Zynteglo, in Germany. It will take a while for revenue to pick up for the gene therapy, which targets transfusion-dependent beta-thalassemia. But Bluebird expects to introduce Zynteglo in other key European markets later this year. It also plans for file for U.S. approval in the first half of 2020.

Zynteglo isn't a cancer treatment, but Bluebird has a couple of cell therapies that are. The company's partner, Bristol-Myers Squibb, should file for FDA approval of ide-cel in treating multiple myeloma, a type of blood cancer, this year. Bluebird and BMS are also collaborating on another promising multiple myeloma cell therapy, bb21217. I think that both drugs should become blockbusters if approved.

In addition, Bluebird has another rare disease drug in late-stage testing. The biotech should file for U.S. and European approvals for Lenti-D in treating cerebral adrenoleukodystrophy by late 2020.

Bluebird's partner, Bristol-Myers Squibb, ranks as one of the biggest cancer-focused drugmakers on the planet. Market researcher EvaluatePharma projects that the company's cancer immunotherapy will be the No. 4 top-selling drug in the world within the next few years. BMS has a rising star with its multiple myeloma drug Empliciti. And that's just the tip of the iceberg for BMS.

Thanks to its acquisition of Celgene in late 2019, BMS now has several other blockbuster cancer drugs in its lineup. Revlimid is the biggest moneymaker that BMS picked up in the deal. The company also now claims multiple myeloma drug Pomalyst and solid tumor drug Abraxane.

In addition, BMS's pipeline is bursting at the seams with potential blockbusters. The company expects to win FDA approval for liso-cel in treating relapsed or refractory large B-cell lymphoma by Aug. 17, 2020. We've already mentioned Bluebird's ide-cel, which BMS licensed.

You might be a little surprised to see Intuitive Surgical included along with two drugmakers as a top cancer treatment stock to buy right now. But Intuitive's da Vinci robotic surgical system is used extensively in treating prostate cancer, with 138,000 urological procedures performed with the system in the U.S. alone last year.

To be transparent, though, Intuitive's prominence in treating prostate cancer isn't the main reason why I included this stock. What I most like about Intuitive Surgical is its overall business model. The company basically uses a modern version of the old razor-and-blades approach. It makes money by selling robotic surgical systems but makes a whole lot more by selling replacement instruments, accessories, and providing services.

Intuitive Surgical's recurring revenue in 2019 stood at 72% of total revenue. That figure should continue to grow as the install base for da Vinci grows and as customers use the system for more procedures. Intuitive is also leasing more robotic surgical systems than ever before, which will boost recurring revenue even more.

Other companies hope to challenge Intuitive Surgical's dominance in the robotic surgical systems market. My view, though, is that this competition will be a good thing for Intuitive by expanding the market. I also think Intuitive Surgical's huge head start in developing an ecosystem supporting its technology gives it a solid moat.