Please ensure Javascript is enabled for purposes of website accessibility
Log In Help Join The Motley Fool
Free Article Join Over 1 Million Premium Members And Get More In-Depth Stock Guidance and Research
By David Jagielski - Feb 23, 2020 at 7:00AM

In 2019, the Horizons Marijuana Life Sciences ETF fell 36%. That was disappointing given how good of a year it was for the S&P 500, which went in the opposite direction, rising by 30%. It was a tough year for cannabis stocks as companies continued to turn out losses and disappointing quarterly results that investors simply grew tired of.

Unfortunately, there's little reason to believe the bleeding will stop in 2020, as there's already been no shortage of bad news this year, and there could still be more to come.

Many companies reporting layoffs and changes in upper management

When there are disappointing results and companies are not performing as well as investors and analysts expected, it usually means there will be changes. That's what's been happening with a lot of companies. MedMen Enterprises CEO Adam Bierman stepped down from his position and the company announced it would lay off more than 40% of its corporate staff.

One of the largest announcements came earlier this month when Aurora Cannabis (ACB 10.67%) announced it would be shedding 500 positions and that its CEO, Terry Booth, would be retiring. However, whether that was a voluntary decision is questionable as in a recent interview he referred to himself as "the latest carnage" in the industry. He pointed to the company's rapid growth as a possible reason behind its problems. 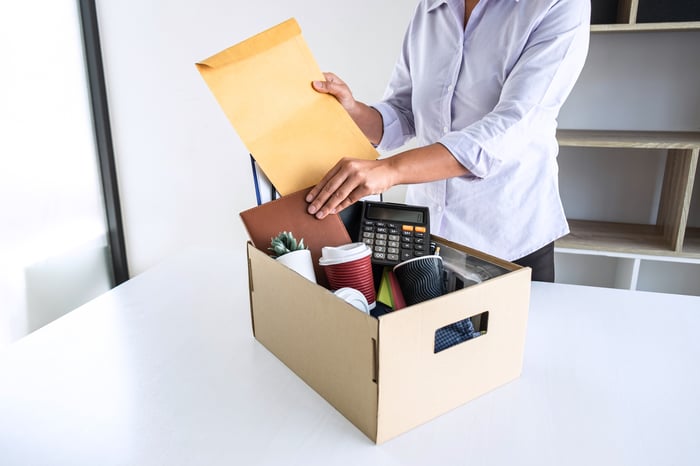 Cannabis producer HEXO (HEXO 5.64%) didn't replace its CEO, but the company announced in October that nearly 200 people would be laid off. The company was coming off a disappointing quarter during which its losses grew from 10 million Canadian dollars a year ago to a loss of CA$57 million in Q4.

Are more headwinds in the forecast for 2020?

With share prices falling and cash burn still high, cannabis companies may continue looking for ways to cut costs. And reducing staff is an easy way to do that. The problems faced by cannabis companies today are self-inflicted, at least according to one industry insider who believes companies were too aggressive in their initial rollouts.

Lisa Campbell is the CEO of Mercari Agency, a sales and marketing agency for the cannabis industry based out of Toronto. She blames the problems on companies not prioritizing the right aspects of their business. "A lot of money was burned through and there wasn't so much focus on quality or execution because the focus was on who could send out more press releases and acquire the most companies," she told BNN Bloomberg.

She's not surprised that it's come to this, either, stating:

We all kind of saw the writing on the wall and that many companies were running out of money. It makes sense that a shakeup was inevitable. It was just a question of when.

HEXO is a prime example of a company that was too aggressive when it said it aimed to make CA$400 million in revenue in fiscal 2020. It reaffirmed the guidance in June 2019, but by October it was cutting jobs and had completely abandoned the forecast altogether. It was a quick 180-degree turn for the company. And unless those moves translate into profitability and improved financials soon, the company may feel compelled to take on even more cost-cutting measures in the hopes of breaking even.

The sad reality is HEXO may not even be in the worst position, as smaller marijuana stocks aren't faring any better and 2020 could prove to be the year many companies go under.

Now, more than ever, investors need to be diligent when choosing a pot stock to invest in, if they choose to invest in the industry at all. Rather than focusing on sheer sales growth and company size, investors should carefully analyze how sound the company's business is, whether it's generating cash flow, and if it's profitable.

Those are metrics that are going to matter to big investors and that can help a stock turn things around. Operating cash flow is arguably the most important number investors should look at. Without positive cash flow, companies may have no choice but to take on more debt or issue shares, and that could put them into even more difficult situations than they're in now.

Pot stocks can't rely on growth prospects anymore to get them out of this mess, and by focusing on a company's fundamentals, investors can avoid taking on risky investments.