Please ensure Javascript is enabled for purposes of website accessibility
Log In Help Join The Motley Fool
Free Article Join Over 1 Million Premium Members And Get More In-Depth Stock Guidance and Research
By Adam Levy - Feb 23, 2020 at 10:00AM

ViacomCBS (NASDAQ: VIAC) has a new strategy in streaming: "maximize the value of our content by reaching the largest addressable audience," CEO Bob Bakish told analysts on the company's fourth-quarter earnings call.

In order to do that, it's focusing on three tiers of streaming: free, broad pay, and premium pay. It already has products in free (Pluto) and premium pay (Showtime OTT). Bakish plans to take CBS All Access and add thousands of hours of content from Viacom's networks and Paramount's film library to give it broader appeal. CBS All Access currently has around 5 million subscribers.

Bakish's strategy is similar to AT&T's (T 0.56%) strategy with HBO Max, but still a bit more confusing. And while the success of Walt Disney's (DIS -0.90%) Disney+ launch was proof that simpler is generally better in streaming, Bakish's plan leaves a lot of questions. 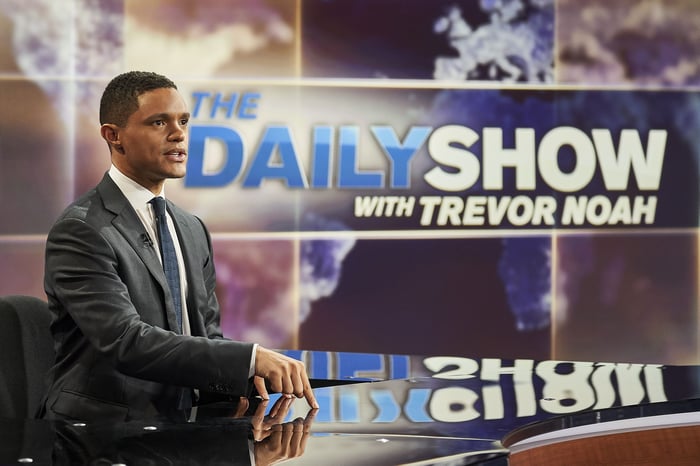 Why lump everything but Showtime together?

But most successful streaming services aren't lumping together disparate content that appeals to a variety of demographics. That's because doing so means competing directly with Netflix for general entertainment time and budgets. Even Disney separated its streaming content based on the demographic appeal -- Disney+ is for families, Hulu contains more adult and prestige programming, and ESPN+ is for sports fans.

HBO Max is taking the same approach of lumping a bunch of content together that all appeals to various demographics. It's unclear how effective that strategy will be in attracting new subscribers, but a key part of the company's strategy with HBO Max is to improve HBO subscriber retention. It also seems to be a ploy to increase the wholesale price for HBO with distributors. That doesn't seem to be part of ViacomCBS's strategy, as it's keeping Showtime separate.

Which projects does it license and which does it keep for itself?

As part of the company's strategy of "reaching the largest addressable audience," Bakish expects to continue licensing some programming, but retaining other projects exclusively for its own streaming service. The reasoning is that exposing a broader audience to characters like SpongeBob SquarePants will attract more viewers to its properties.

But that might just be a bit of retroactive reasoning behind some existing content deals the Viacom and CBS put in place prior to their merger. It's creating a SpongeBob spinoff for Netflix and licensed the rights to South Park to WarnerMedia among other deals.

Disney, as a counter-example, is going all in on its own streaming service. It's foregone hundreds of millions in licensing revenue as it pulled back content from other platforms and retained new content for itself. The strategic decision to include Disney "vault" films and release films to Disney+ as soon as possible also means its going to cut into home media revenue. But the strategy is clear; it's all in on Disney+. ViacomCBS' strategy isn't as clear.

What about its cable networks?

Viacom's cable networks are full of general entertainment content. That's the content that's most conducive to time-shifted viewing, unlike sports or big live events. And if all of the company's cable networks' best content will be on the new "House of Brands" streaming service, that destroys their value for distributors.

That's a concern of LightShed analyst Rich Greenfield. "If all the good stuff is streaming, either on their own service or on third party platforms, why should Dish Network carry Viacom channels?" he noted.

Viacom has historically struggled to negotiate carriage deals with pay-TV providers. The new streaming strategy could make that even more difficult as it tries to balance its interests in streaming with one of its biggest sources of revenue. Affiliate fees accounted for 31% of ViacomCBS's revenue last year, and advertising revenue (40%) is closely tied to distribution as well.

By comparison, WarnerMedia is using HBO Max to increase the value of HBO in the cable bundle. Disney is being selective with which content it brings to its streaming services (specifically FX on Hulu) while keeping its flagship ESPN sports event content exclusive to the cable network. But if ViacomCBS is offering everything to subscribers on streaming, it might have even more trouble negotiating carriage deals than it has in the past.

The "House of Brands" streaming service will launch later this year, but Bakish still has a lot of questions to answer around how the strategy will support his vision of maximizing the value of his company's content.