Please ensure Javascript is enabled for purposes of website accessibility
Log In Help Join The Motley Fool
Free Article Join Over 1 Million Premium Members And Get More In-Depth Stock Guidance and Research
By Adria Cimino – Updated Feb 24, 2020 at 10:46AM

Walmart and Target lost out in toy sales and other areas while Amazon shined -- but grocery might leave enough room for all players.

Walmart's (WMT -0.65%) biggest business is groceries, and Target (TGT -2.62%) is ramping up its position in the area. With both companies reporting weakness in certain general merchandise categories during the holiday season, sales of online groceries -- a growing business, and one usually involving the purchase of necessities -- may be the key to boosting revenue even when sales of other products slip.

Amazon has expanded considerably in grocery -- the company said fourth-quarter grocery delivery orders from Amazon Fresh and Whole Foods Market more than doubled year over year. Still, Walmart also saw strength in grocery in the quarter, and Target last fall announced the launch of its new grocery brand called "Good & Gather." The jury is still out on whether Walmart or Amazon are winning the grocery game, but earnings reports show the market is big enough for everyone -- at least for now. 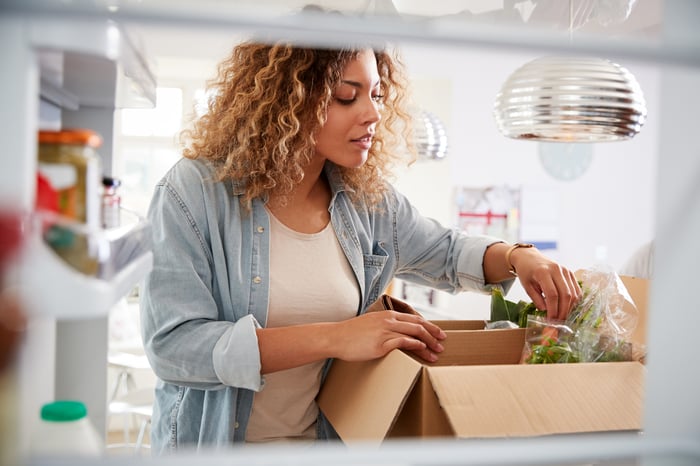 More than half of U.S. sales for Walmart

Grocery accounted for about 56% of Walmart's U.S. sales in fiscal 2019, the most recent year for which this data was available. Even though earnings for the fourth quarter of fiscal 2020 missed analysts' estimates, Walmart said U.S. grocery sales were strong during the period. This is probably because Walmart hasn't rested on its laurels and continues to be offensive rather than defensive in facing online competition.

In its meeting with the investment community, Walmart said that though just a few years ago it didn't offer grocery pickup or delivery, it now offers pickup in about 3,200 stores, and 1,600 stores will deliver orders to your door. Walmart has a total of 4,700 locations nationwide. The retailer said its U.S. e-commerce sales grew 37% in fiscal 2020, and grocery pickup and delivery added to fourth-quarter e-commerce gains.

Though Walmart is closing its JetBlack white-glove concierge service, Walmart's shopping carts indicate the company is still winning over higher-income customers. Walmart has noticed that pickup customers are ordering more premium items like Wagyu beef or organic products. That's encouraging for Walmart investors, considering Amazon took a great leap into the high-end grocery market when it bought Whole Foods in 2017.

Can strength in grocery actually help Walmart boost sales in other areas? A move later this year might be the key. Walmart plans to consolidate its two apps -- the blue one for general merchandise and the orange one for grocery -- into a single app. One could imagine that may make it easier for grocery shoppers to shop other departments -- something they might not have done if they had to change apps.

A big new brand for Target?

Target isn't a grocery giant like Walmart. Instead, its sales are pretty even across categories, with each business accounting for about 20% of revenue. That said, Target is making efforts to expand in food and beverage. With its new Good & Gather brand, it expects to introduce more than 2,000 new products to its stores, including dairy, meats, produce, and sparkling water, by the end of this year. The company, which has 42 owned brands -- including the multibillion-dollar Cat & Jack kids' apparel brand -- said Good & Gather represents its biggest owned brands launch.

While Target isn't yet a food and beverage giant, it will be interesting to see how far the retailer can go in this market. And with the project already in progress, investors should have a clear picture in a few quarters. Like Walmart, Target's online presence is growing. In the third quarter, online sales increased 31%.

Beyond the fact that groceries fall into the necessity category, there's another reason to be optimistic about Walmart's and Target's efforts in the area of food and beverages, as well as e-commerce and delivery. According to eMarketer, U.S. grocery is the fastest-growing e-commerce product category and will reach $38 billion by 2023 from almost $20 billion last year. If both retailers continue to expand their offers and tailor them to customers' needs, grocery could be more than a small bright spot in their earnings reports.

Of course, shares of Walmart and Target may suffer when any business area disappoints, as each segment represents a decent part of the earnings picture. But grocery could be seen as a source of stability to help both of these retailers when shoppers turn to online-only players for games, sweaters, and televisions.

John Mackey, CEO of Whole Foods Market, an Amazon subsidiary, is a member of The Motley Fool’s board of directors. Adria Cimino has no position in any of the stocks mentioned. The Motley Fool owns shares of and recommends Amazon. The Motley Fool has a disclosure policy.