The Democratic presidential hopeful says its time to fully legalize marijuana, and lays out her policies to do so in detail.

Massachusetts Sen. Elizabeth Warren, a longtime advocate for marijuana law reform, has formally spelled out her position on legalization. In a detailed web post titled "A Just and Equitable Cannabis Industry," she enumerated the various measures she would support if elected president, including actions she would take unilaterally if necessary. 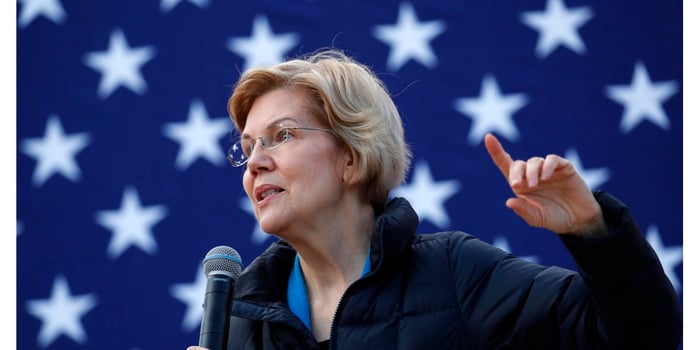 Sen. Warren categorically states that full legalization is needed in the U.S. "as soon as possible." Her intention is to remove marijuana from the list of scheduled drugs under federal law, and to expunge previous convictions for cannabis-related offenses.

Other elements of the senator's plan include protecting immigrants who work in the cannabis industry, funding new research into cannabis, and allowing sovereign Native American tribes to determine their own laws regarding the drug's use and sale within their lands.

Were she to be elected president and turn even some of these goals into policies, it goes without saying that the marijuana industry would benefit enormously -- perhaps cannabis companies would become habitually profitable.

Although the largest publicly traded marijuana companies are based in Canada, there are numerous U.S.-headquartered ones that would be positioned to profit handsomely from legalization. For example, Curaleaf (CURLF -7.14%) is a leading multistate operator of cannabis dispensaries, and will shortly expand its footprint with its buyout of the Grassroots brand (Curaleaf and Grassroots agreed on the acquisition last year, but the deal has still yet to close).

Marijuana stocks could use the boost: They've performed poorly as a class over the past year or so, and took sharp hits during Monday's broad market plunge. That day, Curaleaf's stock price fell by almost 6%.