Please ensure Javascript is enabled for purposes of website accessibility
Log In Help Join The Motley Fool
Free Article Join Over 1 Million Premium Members And Get More In-Depth Stock Guidance and Research
By Rich Duprey - Feb 25, 2020 at 9:00AM

As the vaping category loses its luster, nicotine pouches could be the next big thing.

Changing regulation and a lung injury outbreak last summer have soured the market for electronic cigarettes, a fortuitous development for nicotine pouch manufacturer Swedish Match (SWMAF 1.90%), which is in the midst of a capacity expansion push.

Although cigars actually account for the bulk of the cigarette alternative's revenue, nicotine pouches are the fastest-growing segment in the tobacco market, and Swedish Match is looking to capitalize on it by adding to its ZYN brand's potential.

CEO Lars Dahlgren told analysts Swedish Match was "well underway to double that capacity by early 2021, but we intend to further increase distribution during 2020."

Analysts think nicotine pouches could be even bigger than e-cigs. 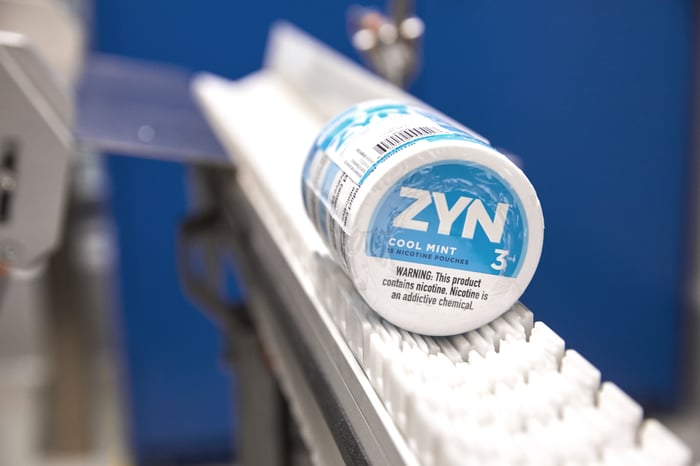 Snus, snuff, and nicotine pouches are all similar products that analysts at IRI say grew sales by 250% last year.

Snus and snuff are finely ground or powdered tobacco available loose or in pouches that are tucked between the cheek and gum. Swedish Match is the world's largest producer of snus in Sweden and the third largest in the U.S. behind British American Tobacco's (BTI 0.39%) Camel brand and Altria's (MO 0.97%) Copenhagen, but its General brand of snus was the first tobacco product to receive a reduced-risk label from the Food & Drug Administration.

That should give Swedish Match a competitive advantage, as it will be allowed to market the snus as putting users "at lower risk of mouth cancer, heart disease, lung cancer, stroke, emphysema, and chronic bronchitis." But the company sees the most growth potential in its tobacco-free nicotine pouches.

A race to grow big

Swedish Match introduced its ZYN brand last year, which is now available in 67,000 retail locations. Due to the expanded distribution, the U.S. accounted for nearly half of its smoke-free sales, up from less than 40% in the fourth quarter of 2018. While currency fluctuations have helped, Dahlgren says U.S. sales of ZYN "have been the key driver."

The growth is why the company is expanding its production capacity, even though it just did so once already. Reuters reports the new factory will be able to produce up to 200 million cans of ZYN beginning in 2022.

Importantly, though, unlike cigarettes and electronic cigarettes, nicotine pouches can be advertised on television, radio, and out-of-home venues like billboards, which British American is taking advantage of by promoting Velo in TV ads. Nicotine pouches are also available in 75,000 stores, which is more than ZYN and perhaps a reason Swedish Match sees a need to drive distribution even further.

The push for nicotine pouches occurs as the bloom fades from e-cigs. The FDA has clamped down on the devices amid a so-called epidemic of teen use, and manufacturers of the devices and the e-liquids used in them are facing a looming May deadline to submit premarketing applications to the agency. Most companies likely won't be able to comply.

E-cig usage growth rates dropped dramatically while the rate of decline in the incidence of smoking decreased, indicating users were giving up e-cigs and returning to smoking.

That's an outcome few would support, but it gives nicotine pouch manufacturers like Swedish Match an opening to attract new customers. Although the pouches contain nicotine, which is addictive, the reduced-harm profile could mean big business to come.

In FDA First, Some Tobacco Is Ruled Safer Than Others

With E-Cigs Under Pressure, Are Nicotine Pouches a Better Alternative?