The electronic cigarette industry looks like it's heading toward a breaking point as concerns over health issues and investigations into teen usage are causing retailers to abandon the vape products. Costco, Kroger, and Walmart have all said they're going to stop selling e-cigs because of the growing uncertainty surrounding the regulation.

That poses a threat to the tobacco giants because they all have e-cigs on the market, but Altria (NYSE:MO) is most exposed because of its nearly $13 billion investment in the leading e-cig maker, Juul Labs, and its marketing and distribution agreement with Philip Morris International for its IQOS heated tobacco device that it only just began selling in Atlanta.

While e-cigs have grown into a multibillion-dollar industry, Altria and the other tobacco companies do have a fallback position: nicotine pouches, which could ease the impact of an e-cigs implosion, though they almost certainly won't have the same impact as the business they would be replacing. 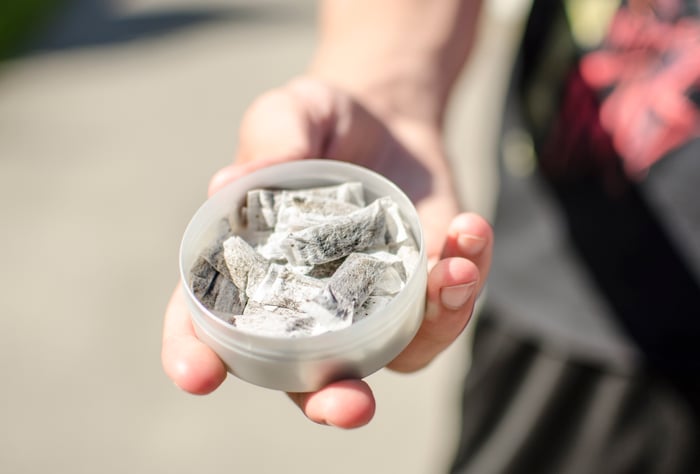 Snus, snuff, and nicotine pouches, both with and without tobacco, could be big revenue generators as e-cigs stumble. Image source: Getty Images.

Don't turn up your nose at snus

Snus, snuff, and nicotine pouches are all similar products and are one of the fastest-growing tobacco niches in the industry, with analysts at IRI saying sales grew 250% last year. They are small, lozenge-sized pouches containing finely powdered tobacco, and the newest versions are tobacco-free, containing nicotine salts derived from tobacco mixed with other food-grade filler.

British American Tobacco (NYSE:BTI) is the largest snus manufacturer in the U.S. with its Camel brand, selling 3.9 billion pouches last year, almost double the number from the year before, while Altria markets both Copenhagen and Skoal snus.

The third-largest snus maker is Swedish Match (OTC:SWMAF), whose push to grow its U.S. business by rolling out its ZYN brand nationally earlier this year likely caused Altria to acquire the international business of Burger Sohne for its on! brand of tobacco-free nicotine pouches. It could have been a very fortuitous purchase.

When one door closes, another opens

In the wake of over 1,000 cases of lung illness caused by vaping illicit THC cartridges, which also led to numerous deaths, politicians are calling for stricter regulation, which the Food and Drug Administration is already looking to implement. And with retailers abandoning the product, e-cigs may be left with few alternatives than to be sold in vape shops, severely limiting access.

Because the FDA is also proposing banning flavored e-cigs to deter teen usage, and several states have already moved forward with such bans, this smoking alternative that was once seen as one of the best ways to wean smokers away from cigarettes may be stubbed out.

While that would likely be a terrible outcome for smokers, since e-cigs have helped many people quit smoking, it could open a pathway for snus and nicotine pouches to grow even more, and Swedish Match could be one of the biggest beneficiaries.

Swedish Match's second-quarter earnings report showed currency-adjusted sales up 6%, and profits 7% higher, primarily because of the introduction of ZYN into the U.S. market. While the launch helped the company boost its results more than they might otherwise have shown -- and it gained on positive currency translation effects, too -- CEO Lars Dahlgren said in a statement that nonetheless, the snus maker's "underlying financial performance during the quarter was impressive."

Swedish Match is the largest snus manufacturer in Sweden, where sales surpass those of traditional cigarettes, but the U.S. is seen as where significant growth can occur. (Snus are banned throughout the European Union.) It now has ZYN in more than 51,000 locations in the U.S., helping to push currency-adjusted segment sales 20% higher for the period.

Both Swedish Match and British American have submitted applications to the FDA to have their snus given a modified risk label, meaning they could be marketed as being safer than cigarettes. Altria, whose Copenhagen and Skoal brands each represent over $1 billion in annual sales across the smokeless tobacco category, won approval from the agency's advisory panel to have its Copenhagen brand of fine-cut moist snuff given the reduced-risk designation.

With e-cigs under fire, tobacco companies may find their nicotine pouches are the safer bet.