In the decade since it was given the power to regulate tobacco, the Food and Drug Administration has failed to issue a single reduced-risk label for any tobacco product. Almost three dozen applications have crossed its desk, but not one has been deemed worthy of being declared safer than cigarettes.

Tobacco giant Altria (NYSE:MO), however, may become the first company to earn the designation, as an FDA advisory panel has agreed that the company's Copenhagen brand of fine-cut moist snuff poses less risk of lung cancer than cigarettes.

If the FDA follows the panel's nonbinding decision, a reduced-risk label could be a lucrative achievement for Altria. 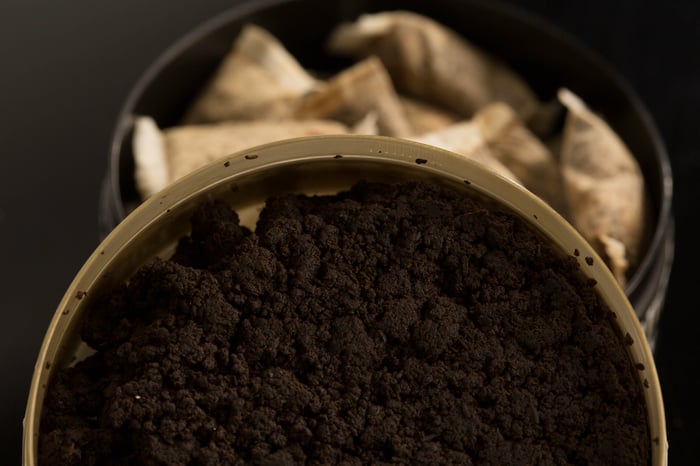 Many companies have tried to get a modified risk tobacco product (MRTP) label, which tells customers the product is less harmful or carries less risk of tobacco-related disease than other tobacco products, though none have succeeded.

One of the most prolific filers has been Swedish Match (OTC:SWMAF), a maker of snus, or moist powdered tobacco. Swedish Match first filed for an MRTP label in 2014, but the application was rejected two years later for deficiencies. The FDA objected to Swedish Match's proposed warning labels because they purported there were no risks with using snus as opposed to reduced risks, though it gave the company the opportunity to correct the problems and resubmit.

The snus maker resubmitted a revised application last September, and though the advisory panel considered Swedish Match's new labels at the same time that it was examining Altria's snuff product, it once again couldn't come to an agreement on that application.

Some members expressed concern that if the FDA gave its imprimatur to snus, more young people would start using it. Others argued that if snus couldn't earn an MRTP label when there was clear evidence it was safer than cigarettes, then there was no point in the designation. The panel passed the application on to the regulatory agency without coming to a conclusion.

That means Altria's snuff is the only product going forward with the support of the committee, which voted 8-0 in favor (with one abstention) of Copenhagen Snuff Fine Cut's getting the MRTP label. That doesn't mean Swedish Match's snus won't earn one, but it's less certain than Altria's path, though the FDA doesn't haven't to follow the panel's recommendation.

British American Tobacco's (NYSE:BTI) Reynolds American division also has a snus application before the agency. The committee heard testimony last September, and as with Swedish Match, it was divided on how to proceed.

It's a curious dichotomy because snuff and snus are very similar. Snuff is a smokeless, finely ground tobacco product that is inhaled into the nasal cavity for a quick hit of nicotine. Moist snuff is similar, but it's meant to be put in your mouth. Snus is also a moist tobacco product typically held in the mouth between the lips and gums, but it is finely powdered.

A chance to pull further ahead

Smokeless tobacco products like Altria's leading Copenhagen brand, which has a 34% share of the retail market, generated $2.1 billion in 2018, about 13% of the tobacco giant's total revenue and 5% more than the year before. A reduced-risk label could allow the brand to further differentiate itself from the competition and give it a competitive edge by allowing Altria to claim it is safer than cigarettes, and by extension other snuff and snus products that haven't earned the designation.

FDA commissioner Scott Gottlieb has said he's looking for products that are safer than cigarettes, and though he was discussing e-cigs at the time, the statement could just as well apply to snuff. This may be the agency's chance to approve its first reduced-risk label.