Please ensure Javascript is enabled for purposes of website accessibility
Log In Help Join The Motley Fool
Free Article Join Over 1 Million Premium Members And Get More In-Depth Stock Guidance and Research
By George Budwell – Feb 26, 2020 at 9:00AM

Amarin's strong fourth-quarter results failed to excite shareholders. Savvy investors with a long-term outlook, though, may want to buy this stock now.

Amarin (AMRN -2.68%) released better-than-expected 2019 fourth-quarter results after the closing bell Tuesday. The biopharma's stock promptly dropped by another 0.86%, bringing its total loss for the year to a disappointing 18.4%.

What's behind this relentless downward trend? Well, first off, most stocks are getting hammered right now due to the confluence of the COVID-19 illness, worries about the possible impact of a Bernie Sanders presidency on the pharmaceutical and banking industries, and the simple fact that most equities were flat-out overvalued from a historical perspective. Amarin hasn't been able to escape this vortex of headwinds during the opening weeks of 2020. 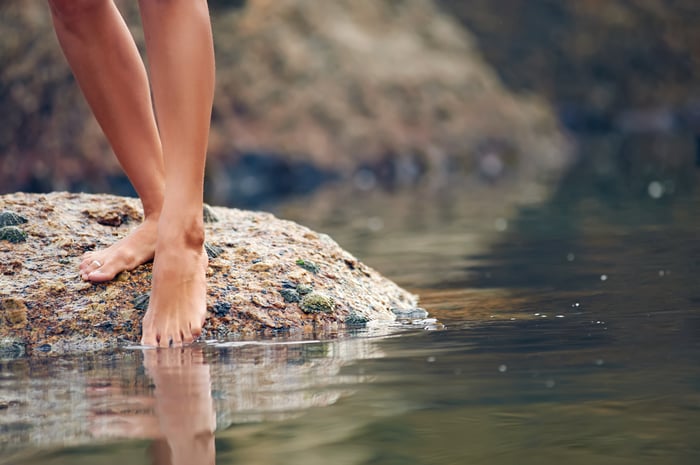 Secondly, the buyout thesis, which was driving a considerable amount of the buying interest in this stock in late 2019, no longer appears to be an immediate catalyst. The pharmaceutical industry tends to make its big-item acquisitions within the first six weeks of the new year in order to build these additions into their near-term outlook.

What's more, several big pharmas of late have chosen to slim down instead of bulk up. The offshoot is that the hottest buyout candidates have been companies with markedly lower market capitalizations than Amarin. That's not to say that Amarin won't fetch a tender offer at some point this year, but the chances appear to be waning for a variety of reasons.

Is Amarin's ugly 2020 actually a great buying opportunity for biotech investors? Let's check out how things are shaping up for the company per its latest financial update to find out.

During the fourth quarter of 2019, Amarin's prescription omega-3 treatment, Vascepa, received the Food and Drug Administration's blessing as an important new therapy for cardiovascular risk reduction in patients with stubbornly high triglycerides despite being on statin therapy. This expanded market could prove to be worth anywhere from $2 billion to $10 billion in annual sales. Vascepa thus stands to become a top 10 best-selling drug at some point in the 2020s -- even though a cadre of analysts still have their doubts. That's clearly the main headline of the biopharma's 2019 fourth-quarter and full-year financial report.

Next up, Vascepa's sales grew by an astonishing 87% over the whole of 2019, relative to 2018. The drug is therefore poised to hit blockbuster status (greater than $1 billion in annual sales) as soon as 2021. So these bullish sales forecasts do have some solid real-world data to back them up. Vascepa is the real deal Holyfield from a sales growth standpoint. That fact can no longer be denied by even the staunchest of critics.

The third key point is that Amarin should be cash flow positive from this point forward. That's important because it means that Amarin should be able to grow its already sizable cash position. At the end of the fourth quarter, for instance, the company said that it had $644.6 million in the bank. As such, it's a real possibility that Amarin may end 2020 with close to a cool billion in cold, hard cash. Amarin, in turn, is clearly building toward the type of financial capacity that would allow it to become a serious player on the merger and acquisition scene, perhaps starting as soon as next year.

Amarin is definitely worth buying at these levels. While some investors have clearly grown impatient, the company's long-term investing thesis remains completely intact. Vascepa's sales are growing at a breakneck pace, the company's balance sheet is improving, and the biopharma is poised to take the next steps in its evolution. In a nutshell, Amarin has the potential to morph into a large-cap drugmaker over the next 12 to 24 months.