Please ensure Javascript is enabled for purposes of website accessibility
Log In Help Join The Motley Fool
Free Article Join Over 1 Million Premium Members And Get More In-Depth Stock Guidance and Research
By Rick Munarriz - Feb 26, 2020 at 11:00AM

Theme parks chief Bob Chapek will take over as CEO for the media giant after Bob Iger's surprising resignation.

No one wanted to see Bob Iger go as Disney (DIS -4.00%) CEO, but here we are. After his 15 years at the helm -- with four contract extensions along the way -- his abrupt departure on Tuesday was jarring. New CEO Bob Chapek will do just fine, even if Wall Street's initial reaction and outrage on social media suggest otherwise.

Let's start by tackling the stock market's reaction to the shocking news. Iger had another 22 months on what was supposed to be his final contract extension. Wall Street doesn't like uncertainty, and Iger is handing over the reins at a very challenging time. Disney is switching drivers in a moving vehicle on a bumpy road, and that's always risky. We will eventually find out his reasons for leaving at this juncture, but to be fair, he's not going away completely. He will assume the role of executive chairman, active in the boardroom and directing Disney's creative endeavors through the end of next year. The market's reaction is perfectly natural. When someone is doing a good job -- as Iger has for the most part -- investors aren't going to applaud change. 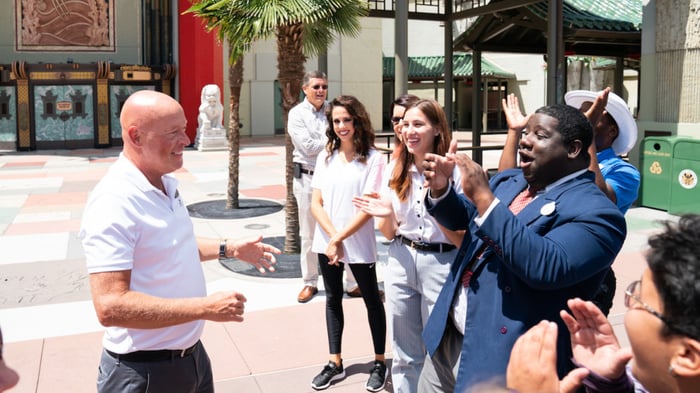 Michael Eisner was a rock star through most of his 21 years as CEO, but a year before he handed the keys to Iger he had lost the faith of Disney investors. A whopping 43% of its shareholders had withheld support of re-electing Eisner to the board, and he realized it was time to go. No one is suggesting that Iger's shine would've dulled if he kept pushing out his retirement to the point where he would overstay his welcome, but this is a good time as any to point out that Iger wasn't seen as an overnight savior.

Iger earned his halo under fire. He quickly brokered a deal to make peace with Pixar, something that didn't seem possible under Eisner. After cutting a big check to take full ownership of Pixar, Iger brokered other 10-figure deals for Marvel and then Lucasfilm. Armed with some of the hottest franchises, Disney would corner the local multiplex. Iger also embraced digital streaming more aggressively than rival studios even before the breakout success of Disney+, as well as extending Disney's theme parks empire to China.

We don't know what Chapek's signature moves will be. He's been a part of Disney's studio, consumer products, and more recently theme parks division. The social media firestorm that's been kicking up since Tuesday afternoon's surprising announcement stems largely from theme park buffs who blame Chapek for injecting too much of Disney's intellectual properties into its gated attractions.

It's an odd knock for fans of a theme park concept that was rooted in the idea of promoting Disney's original animation franchises. The masses see things differently than diehard fans do. When Star Wars: Galaxy's Edge failed to draw the expected crowds in Disneyland following its springtime debut last year, the knock was that there weren't enough of the original characters present in the 14-acre expansion. In the end, the numbers don't lie. Despite the steady trickle of inflation-beating annual price increases -- a trend that predates both Chapek and even Iger -- Disney's theme parks are clocking in with record attendance levels.

Disney World and Disneyland buffs will dwell on entertainment and other budget cuts under Chapek's watch, but it's hard to argue that the world's leading theme park operator is phoning it in, given the massive investments it's making to update Disney World ahead of its turning 50 next year. There are a couple of other Disney executives it could've tapped to replace Iger, but there's no way it would've looked for an outsider to run the world's top entertainment company and leading consumer discretionary stock with so many moving parts.

Chapek's experience across the Disney's varied businesses makes him the right choice. Wall Street doesn't like it. Critics don't get it. Iger was eventually going to move on, and if Chapek proves me or the naysayers right, the answer won't materialize until he gets a chance to earn his own halo.