Please ensure Javascript is enabled for purposes of website accessibility
Log In Help Join The Motley Fool
Free Article Join Over 1 Million Premium Members And Get More In-Depth Stock Guidance and Research
By Amar Khatri - Feb 26, 2020 at 9:09AM

This cancer-drug maker has a novel medicine with the possibility for extraordinary growth.

Cancer-drug maker Karyopharm Therapeutics (KPTI 4.88%) has seen phenomenal growth since early 2019, with its stock up more than 60% in a bit more than a year.

The 12-year-old company is pioneering novel drugs that will help treat patients with certain blood cancers or solid tumors. Over the past six months alone, the stock has generated gains of 72%. So what's generating all this buzz? 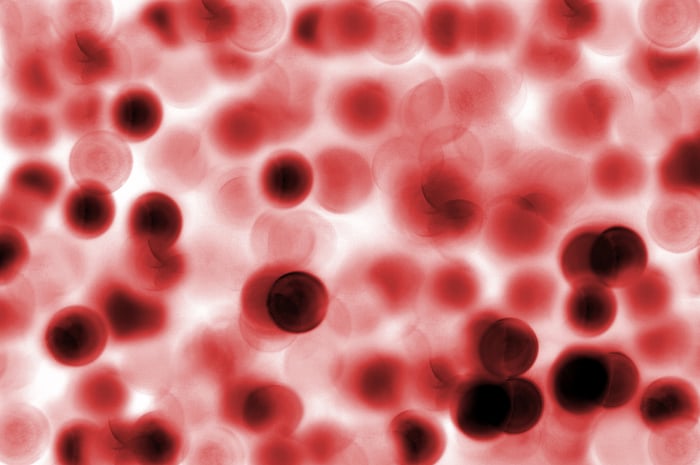 A key area of focus for Karyopharm is the blood cancer known as multiple myeloma (MM). The second most common blood cancer next to non-Hodgkin lymphoma, MM affects the body by taking over healthy blood cells, overwhelming it to the point that it's unable to fight infections.

In July, Karyopharm Therapeutics achieved a milestone with a U.S. Food and Drug Administration (FDA) approval of its treatment for a relapsed or refractory multiple myeloma. This type of cancer is resistant to five of the most commonly used anti-myeloma drugs on the market (Revlimid, Velcade, Poalmyst, Darzalex, and Kyprolis); Karyopharm's drug selinexor, branded as Xpovio, is the first and only medicine that will treat it.

The market researchers at iHealthcareAnalyst expect the market for MM treatments to be huge, anticipating that it may reach $50.5 billion worldwide by 2025. That's an expected compound annual growth rate of 13.3%, driven by branded drugs and potential therapies. MM drugs boast among the highest sales in North America, and global sales were valued at $11.9 billion in 2017, suggesting there is still lots of room to grow in this space.

Bristol-Myers Squibb's Revlimid, the blockbuster drug in MM, has benefited from its important place in multiple myeloma treatment regimens for patients worldwide. Revlimid is different from its competitors because it is taken orally and can be combined with other treatments, and it helped propel Bristol-Meyers Squibb to more than $1 billion in revenue per quarter in 2019.

So if Revlimid is the market leader, where does Karyopharm fit in?

Xpovio (selinexor) is projected to reach $746 million in sales by 2026 according to market research company PharmaIntelligence, which has projected it would rank sixth in sales by then thanks to a loss of patent exclusivity for many of the top sellers -- including Revlimid -- by 2022. As these drugs start to lose exclusivity, their sales will decline, allowing Karyopharm to take a commanding lead in the market.

Xpovio has an advantage in its capability to treat very severe forms of MM. There are no generics or therapeutic equivalents available in the United States, and Karyopharm will enjoy market exclusivity until 2026 and patent exclusivity until 2032. This will allow the company to generate some market share, and it gives time for the study of the drug's usefulness in additional treatments for other forms of cancer.

In fact, Xpovio was recently approved by the FDA to treat another form of severe cancer called relapsed/refractory diffuse large B-cell lymphoma. This expansion should bring additional revenue for Karyopharm -- and a stock-price increase for shareholders.

Since the FDA approval of Xpovio in July, Karyopharm's stock price has exploded, with the help of positive earnings results over the past two quarters. Karyopharm generated more than $30.5 million in net revenue in full-year 2019, with $17.7 million coming in the fourth quarter alone. Prescription demand for Xpovio also saw a boost in the fourth quarter, up 65% compared with the third. 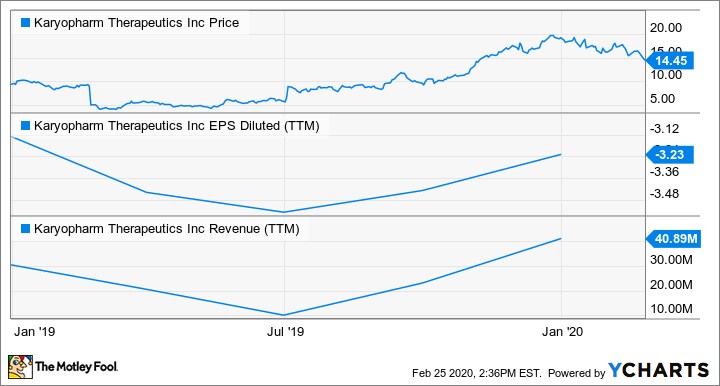 This year, Karyopharm will be starting five additional clinical trials using Xpovio to address cancers such as diffuse large B-cell lymphoma, colorectal and lung cancer, glioblastoma (an aggressive form of brain cancer), and myelodysplastic syndromes (MDS). Their success would mean significant growth opportunities for biotech investors in Karyopharm Therapeutics. With $265.8 million in cash, the company has the opportunity to invest in future growth and R&D. The success of Xpovio is making Karyopharm's future look bright.