The news comes as Tesla is aiming to sharply increase solar deployments.

While Tesla's (TSLA -2.62%) electric-car business has been growing rapidly, this hasn't been the case for the company's solar business. After hyping up its plans for solar products following the acquisition of SolarCity in late 2016, the new business has floundered. This remains the case even recently, with megawatts of solar deployed in the fourth quarter of 2019 falling 26% year over year.

It's not surprising to hear on Wednesday, therefore, that Panasonic Corporation is cutting its ties with Tesla when it comes to solar cell manufacturing at the company's Gigafactory in Buffalo, New York. 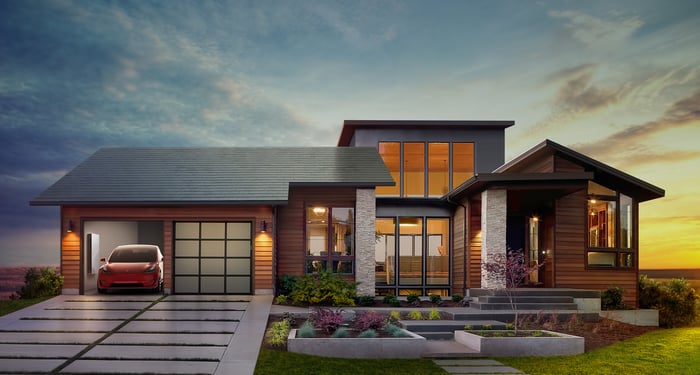 "Panasonic Corporation will begin to wind down U.S. production of photovoltaic cells and modules at Gigafactory New York in Buffalo, NY, in line with the global solar strategy led by its Life Solutions Company," said Panasonic in a press release on Wednesday morning.

Importantly, Panasonic noted that "according to Tesla," the change won't impact Tesla's growth plans for its solar business.

Panasonic's planned departure from Tesla's Gigafactory in Buffalo comes as the electric-car company seems to be once again investing in its solar business.

In Tesla's fourth-quarter update, management said production of its solar roof product had been ramping up. In addition, Tesla said it had partnered with several roofing companies to help install solar roofs.

The company also recently launched a solar rental service for its solar panels, in which customers in limited markets can pay as little as $50 per month to have a solar system installed. The subscription system includes a warranty and support, has no installation fees or long-term contracts, and can be canceled anytime.

A return to growth?

To support its growth plans, Tesla also said in its fourth-quarter update that it was hiring hundreds of employees at its factory in New York. It's unclear, however, if Tesla will now need to hire even more employees in light of Panasonic's departure or if the automaker was already planning for the Japanese company's potential exit. Nevertheless, Panasonic said in its press release on Wednesday that it is going to support Tesla in its hiring efforts to find qualified applicants from within Panasonic's impacted workforce.