Virgin Galactic stock is down more than 15% on Wednesday following the space-tourism pioneer's Q4 earnings release.

Virgin Galactic Holdings (SPCE -4.53%), which is pioneering space tourism, reported fourth-quarter and full-year 2019 results after the market closed on Tuesday. Shares are down 15.3% as of 3:52 p.m. EST on Wednesday, while the S&P 500 is flat. We can probably attribute the market's negative reaction at least in part to the company's revenue and adjusted earnings before interest, taxes, and depreciation (EBITDA) results falling short of Wall Street's expectations.

However, there are two key things to note on this topic. First, this is a "story stock," so current results matter extremely little. Second, the novel coronavirus' effect on the stock market since Monday doesn't allow for a clear picture of how the market is reacting to other specific events, such as earnings releases.

Where the stock's price ends up on Wednesday will probably be of little relevance in the bigger picture. Since the company went public in October at $11.79 per share (via a reverse merger, not a traditional initial public offering, or IPO), the stock has rocketed 189% higher through Tuesday.

Here's how the quarter and year worked out for Virgin Galactic and its investors. 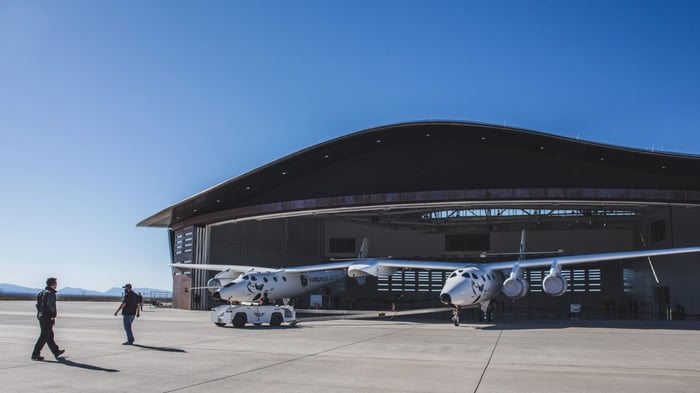 Adjusted EBITDA came in at a loss of $54.8 million.

Wall Street was looking for revenue of $1.78 million and adjusted EBITDA of negative $46.9 million. So Virgin Galactic missed both expectations.

What happened with Virgin Galactic since the quarter ended?

What happened with Virgin Galactic during the quarter?

Here's what CEO George Whitesides had to say in the earnings release:

Throughout 2019, we continued to achieve key milestones in our mission to open access to space in a safe, innovative and affordable way. During the fourth quarter, we took major steps toward reaching that goal by completing our transaction with Social Capital Hedosophia and becoming publicly listed on the NYSE [a reverse merger], as well as building operational readiness at Spaceport America in New Mexico. The progress we made in 2019, combined with the high level of interest from potential customers, underpin the steps we are taking toward reopening ticket sales. We are continuing to build on our strong momentum as we enter the most exciting chapter of our story to date and prepare for commercial launch.

For a company like Virgin Galactic, which has extremely little revenue because it hasn't yet started its core commercial operations, quarterly revenue and profitability metrics don't mean much. Cold hard cash is what matters the most at this point.

Thanks to going public in October, the company has a ton of cash -- $480 million at the end of 2019. Moreover, it has no debt, so it's in great shape to continue to invest in its business. In addition, there's a lot of interest in the stock, as evidenced by its big run-up this year, so the company could always raise money by issuing new shares. That's not preferable, of course, because it dilutes current investors' ownership, but it's good to have options.

Virgin Galactic aims to launch the world's first commercial spacecraft into suborbital space with paying passengers on board sometime this year. Assuming the launch doesn't get pushed back (which I think is a good possibility, but better safe than sorry), the company has projected that it will reach profitability in 2021.