Please ensure Javascript is enabled for purposes of website accessibility
Log In Help Join The Motley Fool
Free Article Join Over 1 Million Premium Members And Get More In-Depth Stock Guidance and Research
By Will Healy – Feb 27, 2020 at 6:00AM

New leadership offers hope, at least in the short term.

Rite Aid (RAD -0.99%) continues to survive, in many ways despite its best efforts. An attempt to sell out to Walgreens Boots Alliance led to the sale of some of its stores. While that cut debt and gave the company some breathing room financially, the drugstore chain still faces intense competition. Some have speculated the company would have to declare bankruptcy in the near future.

However, Rite Aid has also shown some signs of resilience. Amid a change of direction led by a new CEO, Rite Aid's stock has risen in recent months. However, while these changes could help avert a near-term bankruptcy, it still leaves Rite Aid struggling to find a sustained path forward.

The competitive threat facing Rite Aid comes not only from other drugstores such as CVS Health or Walgreens. It also comes from other consumer staples companies such as Walmart, Costco Wholesale, Kroger, and, lately, Amazon.

So intense is this competition that CVS bought an insurance company to diversify its revenue sources. Due to the condition of its balance sheet, Rite Aid does not have this luxury. Amid the failed attempts to sell itself, it has languished as it fights for its survival. Last year, the company instituted a reverse split to prevent a delisting from the New York Stock Exchange. 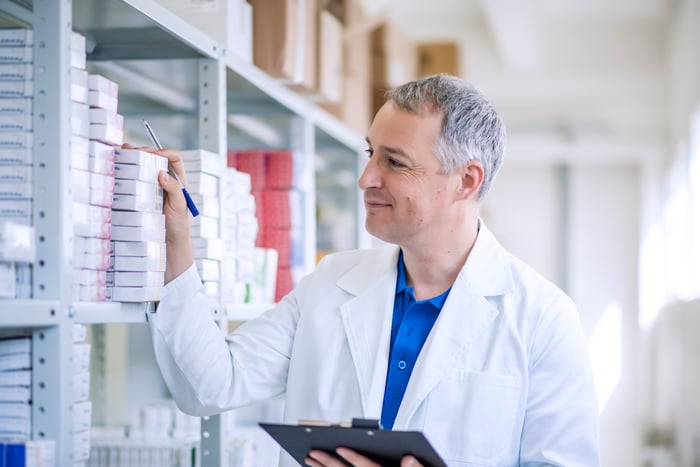 The financials appear to offer little hope. Because it's a $700 million company holding $3.6 billion in long-term debt, many wonder how long it can survive. In its fiscal third quarter (which ended in November), the company reported free cash flow amounting to $0.07 per share. However, that occurred because of a receivable from the Centers for Medicare and Medicaid Services. Free cash flow has generally remained an ongoing struggle for the company.

Rite Aid should hold on (for now)

Despite the weak balance sheet, Rite Aid appears positioned to at least avoid bankruptcy. Some credit for breathing some life into this company likely goes to the new CEO, Heyward Donigan. She came to Rite Aid from Sapphire Digital, a company that employs omnichannel platforms to help clients shop for healthcare.

Despite only holding the job since August, Donigan has begun her tenure on a surprisingly positive note. Third-quarter net income came in at $0.54 per share, beating earnings estimates by $0.45 per share. The stock gained almost 150% over the next 10 days. Though it has since pulled back, investors who bought just before the report have still gained more than 60%. 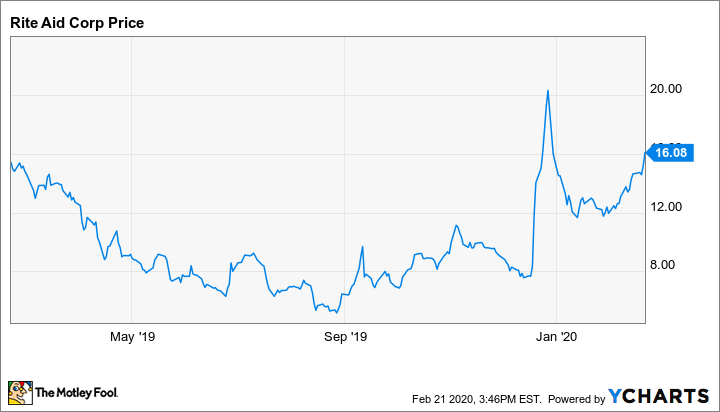 Although Rite Aid likely hired Donigan to leverage her omnichannel experience, the move to omnichannel began before Donigan took the CEO job. Last June, the company partnered with Adobe to enhance the customer experience in all channels through the Adobe Creative Cloud. And in July, Rite Aid subsidiary RediClinic announced it would offer clinical services in 25 Rite Aid locations in metro Philadelphia as well as in 36 H-E-B grocery stores in Texas. Healthcare demand continues to rise, with the population growing by 25 million every decade, with the average number of visits increasing. Much like this higher demand has increased the number of Medicare Part D customers, the growing need for healthcare should bode well for RediClinic.

Still, for all of the optimism surrounding the recent surge in Rite Aid, investors should temper their enthusiasm. While improved profits offer encouragement, quarterly revenue rose by only 0.2% in the latest quarter. Revenue from its retail pharmacy segment dropped by almost 1.7%, primarily because the company closed 62 of its stores over the past 12 months. However, the 5.7% increase in revenue in its Pharmacy Services segment helped Rite Aid achieve revenue growth during the quarter.

In this case, the company can probably thank demographic change for its revenue growth, as an average of 10,000 people continue to age into Medicare every day. Despite that benefit, the company forecasts put same-store sales growth for fiscal 2020 at 0 to 1%.

Moreover, the debt burden places considerable limits on the company's options. Management has begun to improve the utilization of Rite Aid's limited resources. However, the debt makes a purchase comparable to CVS Health's buyout of Aetna unthinkable. It also limits the ability for RediClinic to open more clinics across Rite Aid's footprint of approximately 2,500 stores, let alone H-E-B's locations.

Donigan's leadership bodes about as well as investors can expect for this beleaguered company. Consequently, investors should not expect bankruptcy this year or anytime in the near future. However, with intense competition and crushing debt levels, the prospect for Rite Aid stock to see sustained increases remains in doubt.