The company's hot-and-cold saga appears to be leveling off at a sustainable lukewarm.

Crocs (CROX 5.39%), the maker of funky foam shoes that were all the rage in 2007, is back in a big way. Riding a wave of rekindled love for the ultra-comfortable footwear, the company has improved its fourth-quarter top line to the tune of 22%, reaching a record $263 million for the period ended in December. 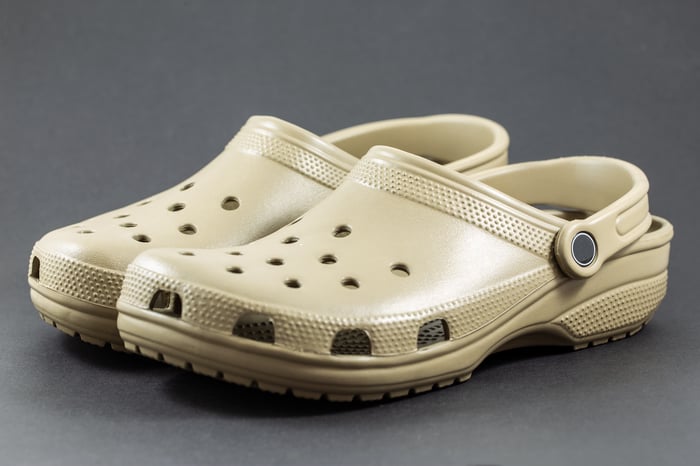 The organization got off to a storied start in 2003, racing to revenue of $847 million by 2007. As is often the case with companies that bolt out of the gate quickly, though, consumers grew tired of the colorful shoes made of synthetic, durable materials. The next couple of years were spent in retreat. It mustered growth again through 2013, only to once again bump into a headwind in 2014.

Crocs began another concerted turnaround effort in 2017, but unlike previous rebound efforts, this one, being led by CEO Andrew Rees, appears to have some staying power. The numbers certainly correspond with Rees' leadership. Not only was Q4's earnings of $0.12 per share a turnaround from the $0.10-per-share loss booked in the comparable quarter a year earlier, Crocs hasn't failed to improve its per-share operating profits in any quarter since the final quarter of 2017. Record quarterly revenues were reported for the third quarter of 2019 as well.

Crocs shares still fell on Thursday -- as much as 21% -- after the company warned investors it would be adversely impacted by the outbreak of COVID-19, the disease caused by the novel coronavirus. The stock was well off of its lows by mid-day, however, as fears related to the outbreak subsided.

Why I Own Crocs Stock

Down 50%, There Has Never Been a Better Time to Buy This Nasdaq Stock

Down Over 50%, Is This the Next Monster Growth Stock?