Please ensure Javascript is enabled for purposes of website accessibility
Log In Help Join The Motley Fool
Free Article Join Over 1 Million Premium Members And Get More In-Depth Stock Guidance and Research
By Timothy Green - Feb 27, 2020 at 10:42AM

Microsoft is the latest company to walk back its guidance thanks to the coronavirus outbreak, and Apple is reportedly losing some vice presidents.

The Dow Jones Industrial Average (^DJI 1.40%) continued its unpleasant journey downward on Thursday, shedding 1.9% by 9:55 a.m. EST. More companies have warned about the negative impact of the coronavirus outbreak, and the first case in the U.S. that can't be traced has been confirmed.

Microsoft (MSFT 2.19%) was the biggest company to warn that it would miss its guidance, although only the Windows and Surface businesses are feeling pain so far. Apple (AAPL 2.38%) stock was also lower after reports of some executive departures.

With the coronavirus outbreak disrupting the supply chains of electronics companies, it's no surprise that Microsoft expects to feel some pain. The software and cloud computing giant warned late Wednesday that its "more personal computing" segment, which includes Windows as well as devices and gaming, would miss the company's previously issued guidance for the fiscal third quarter. 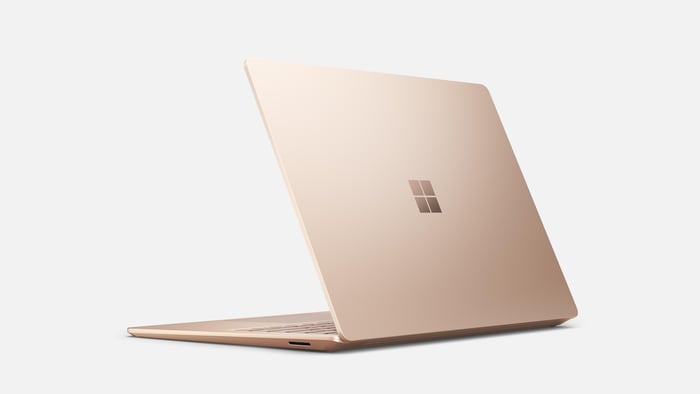 On Jan. 29, Microsoft predicted the segment would produce between $10.75 billion and $11.15 billion of revenue in the third quarter. This guidance featured a wide range to reflect the heightened uncertainty surrounding the coronavirus outbreak in China, but Microsoft underestimated the supply chain disruption caused by the outbreak.

The supply chain is returning to normal operations more slowly than expected, prompting Microsoft to say that it no longer expects the "more personal computing" segment to hit its guidance. The Windows OEM and Surface businesses have been hurt more than expected. Other parts of the tech giant's business remain on track, and demand for Windows is in line with the company's expectations.

This follows Apple's very similar warning, issued earlier this month. Microsoft is far less dependent on gadgets than Apple, instead generating the bulk of its revenue from software like Office and cloud infrastructure. It's possible those businesses could be affected if the outbreak worsens, but so far they're holding up fine.

Shares of Microsoft were down 2.8% on the news.

As Apple struggles with a supply chain that's under stress from the coronavirus outbreak, the company is reportedly seeing some key executives leave. Bloomberg reported on Thursday that one vice president has retired, while another is discussing an exit in the near future.

Nick Forlenza, VP of manufacturing design, has retired from Apple. Duco Pasmooji, a VP focused on operations, is reportedly looking to leave. While the moves may have nothing to do with Apple's ongoing coronavirus crisis, they come at a critical time for the company.

Apple relies on China for much of its manufacturing as well as a significant chunk of its revenue. Apple was forced to pull its guidance after it became clear that the supply chain in China wasn't getting back up to speed as quickly as expected. Demand for Apple products in China has also slumped as consumers pull back amid the outbreak.

As the coronavirus spreads to other countries, there's the possibility of additional demand shocks. All of this would be temporary, and pent-up demand in the aftermath may make Apple whole again. But the company's results will take a hit in the near term.

Shares of Apple were down 3.3% Thursday morning, although the decline is likely due to the steep sell-off affecting the broader market.