The stock has been a solid performer, but should current uncertainties keep investors at bay?

Universal Display Corporation (OLED -3.53%) just finished an incredible year, which capped off an amazing decade; the stock doubled in 2019 and gained more than 1,500% since 2010. But recent pullbacks may have investors second-guessing an investment in this OLED (optical light-emitting diode) specialist. Let's dive into the business, what's ahead for this technology, and whether uncertainties surrounding 2020's projections are a warning sign or an opportunity.

The business of a research powerhouse 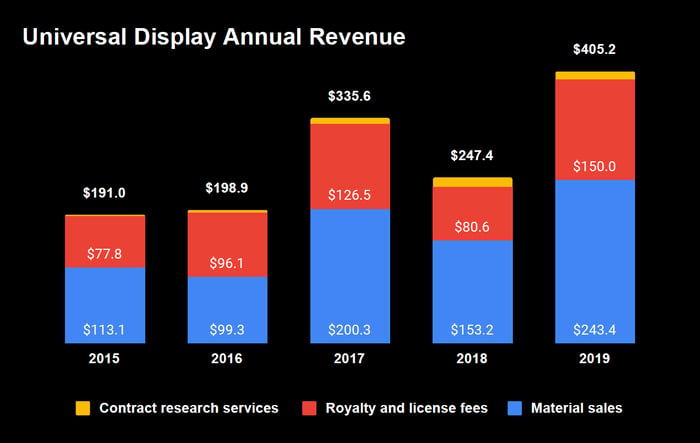 Universal Display's research and development efforts have made OLED screens the choice for today's high-end displays. They are 70% thinner, brighter, have more color contrast, and use less battery than the incumbent LCD (liquid crystal displays). Another advantage is that they are flexible, which opens up other uses such as foldable mobile phones, curved screens for your wrist, car lights, or even workplace lighting.

Today, this technology is limited to high-end devices, but that's starting to change.

The long-term future of OLED devices is bright

On the most recent conference call, President and CEO Steven Abramson shared some market data for 2019 that provides insight into the opportunity for OLED devices. Even though smartphones are the largest users of these screens by penetration percentage and total unit numbers, there's still plenty of opportunity ahead as the move to 5G is likely to drive a new wave of smartphone replacements.

With smartphone processing speeds increasing, additional battery power will be needed, which, in turn, could drive more phone manufacturers to utilize the more power-efficient screen technology. This technology has been limited to high-end models, but the move to expand the usage to lower-priced tiers has already started -- such as the $399 Google Pixel 3a phone.

The company projects the market for OLED screens will double by 2023. Smartphones are the largest contributor to unit volumes, but TVs and laptops will see faster growth. Recent events highlight this trend in the non-smartphone space. In mid-2019, Samsung ramped production of its 13.3" and 15.6" laptop screens and they are now being used in more than a dozen different commercially available laptops. On the TV front, LG Electronics announced 14 new OLED TV products including a 48-inch model at the recent Consumer Electronics Show. LG expects to ship between 5.5 million and 6 million OLED TVs in 2020, up significantly from its 3.3 million in 2019. 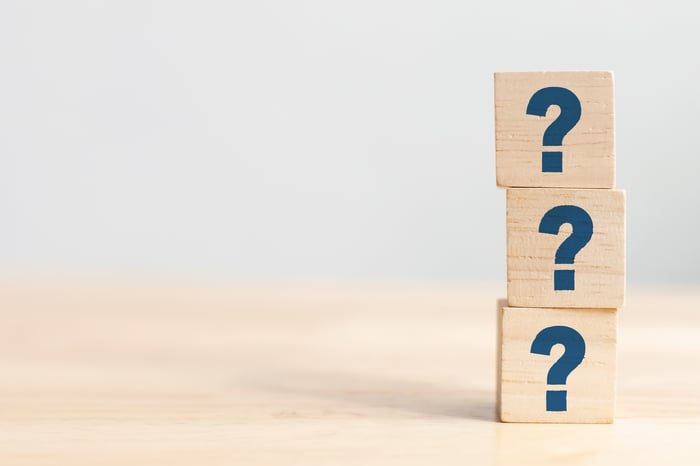 Is now the time to buy this technology pioneer? Image source: Getty Images

The overall market for this technology is growing, but the road ahead for Universal Display may be bumpy.

A host of short-term uncertainties

As investors look at Universal Display's results, it's important to remember that it is often a second-tier supplier. Because its direct customers, screen manufacturers, don't make the consumer-facing end product, it is difficult for the company to project demand with certainty.

Disruptions in demand for an end-user device (like Apple's iPhone X, which uses a Samsung OLED display) or changes to product roadmaps (to add or eliminate OLED screens) are difficult to predict and may take time for the impact to be fully realized. Over the long term, as this technology becomes more widely used, growth will come, but it may be lumpy as consumer-facing manufacturers make product transition decisions.

For 2020, revenue is projected to be between $430 million and $470 million, a 6% to 16% year-over-year growth, far lower than the 64% increase from 2018 to 2019. In its most recent earnings call, management shared a number of short-term concerns that could drive that growth even lower. The coronavirus outbreak was the largest quantified risk with an estimated impact to 2020 revenues between $40 million and $50 million. New manufacturers and plants facing production ramp start-up challenges and trade-related issues were two items that were called out but not quantified. Finally, a large customer made a one-time $25 million purchase with a right-to-return clause that will expire in the first quarter of 2020. If the customer keeps the material, the company will recognize this sale in the upcoming quarter.

These uncertainties are all short-term in nature and may make the stock volatile over the near term, but this OLED pioneer has a lot going for it.

Is now the time for investors to jump in?

This company has built an enviable business with a moat of patents, a strong history of effective research and development, and plenty of opportunity ahead. But even with the stock down 22% year-to-date, the shares are still considered pricey for those with an eye for value. Its 18.7 price-to-sales ratio and 55 price-to-earnings number may only appeal to growth investors looking for technology that's in its infancy. If that describes your investing style, Universal Display is a buy today, but with a caveat.

The short term unpredictability around this year's results may make buying in thirds be the best way to add this stock to your portfolio. Buy a third now and add another helping after one or two more earnings reports, or if the stock continues to pull back. Add the last third as the picture for the year becomes more certain, then sit back and enjoy the ride over the long term as OLED technology becomes more prevalent across all of the screens in our lives.