As competition increases among OLED TV makers, one company stands to benefit most from the growing popularity.

The Consumer Electronics Show (CES 2020) earlier this month in Las Vegas was a showcase of emerging technology, as various companies from around the world exhibited their latest and greatest offerings. As always, televisions were prominently on display during the show, and it was clear from what was being showcased that organic light-emitting diode (OLED) technology is showing up in more models from more manufacturers and is starting to become mainstream. That's good news for manufacturers using OLED and one company, in particular, is poised to benefit significantly from this development: Universal Display (OLED 3.15%).

The range of OLED TV offerings is growing

According to the experts, OLED currently offers some of the highest quality screens commercially available for TVs. Historically, the OLED TV market was dominated by big-name manufacturers like Sony (SONY 2.55%) and South Korea-based LG Electronics and its spinoff manufacturing arm LG Display (LPL 1.63%). 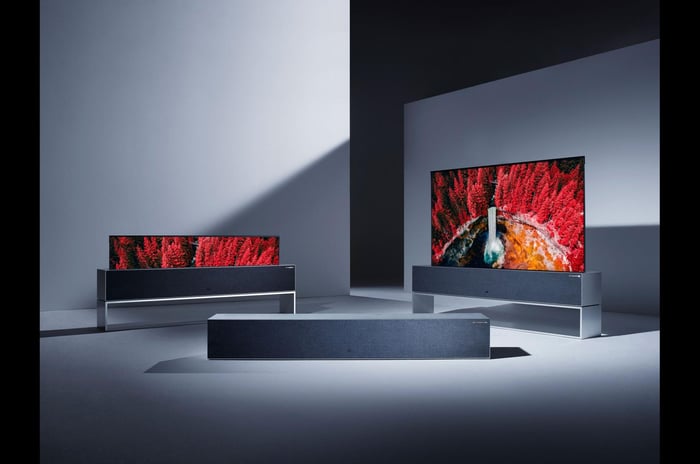 At CES 2020, LG unveiled its roll-up/roll-down Signature OLED TV R9, which has a flexible screen that actually rolls up and down from its console cabinet, similar to a home movie screen. While the price point for this wouldn't be for everyone (it supposedly will go for $60,000), it does demonstrate one of the more appealing features of OLED technology -- screen flexibility (literally). OLED TVs are not all $60,000 -- in fact, they have been dropping in price. New entrants are emerging, with No. 3 TV maker Vizio slated to offer its own OLED TV. Dutch TV maker Koninklijke Philips Electronics NV and China's Konka and Skyworth will be joining the OLED party sometime in 2020 as well.

The market for OLED TVs grew 20% in 2019, largely due to TV price wars during the holiday shopping season. OLED TVs are definitely becoming a more competitive market, which isn't necessarily a great thing for makers of this style of television. But it is great news for Universal Display.

OLED technology has its advantages

OLED technology offers several improvements that are truly game-changers for the manufacturers and users of these devices. First, it is highly energy-efficient. Typical LED screens backlight an LCD panel. This means that even when a portion of the screen is dark, it still uses some level of power to light it at a lower rate. OLED screens don't have this issue -- if the portion of the screen is dark, it uses no power. A user trick to conserve power on an OLED-screen smartphone is to change the screen preferences on the phone to a black background, for example.

In addition, OLED screens can be flexible (as was demonstrated with the LG roll-up TV). LCD-based screens require a glass substrate, which means the screen must be rigid. Think about how much phones have been engineered to accommodate a large piece of glass. OLED screens can use a plastic substrate that could theoretically be folded and put into your pocket or partially rolled and worn as a wristband. Transparent OLED screens could bring the "heads-up" display common in military aircraft to automobiles.

OLED smartphones are another major application of OLED technology. The latest Samsung Galaxy phones, the Apple iPhone XS, the Google Pixel F from Alphabet, and a few others utilize active-matrix OLED (AMOLED) screens. The market for smartphones using AMOLED technology is expected to grow 50% next year.

Finally, OLED lighting has enormous potential, as OLED lights can be run on extremely low voltage or even a battery. Think about having the ability to peel off a light from a roll, and slap it wherever you need lighting. Want to change the color? Easily done. And OLED lighting produces illumination that is closer to natural light than current non-incandescent offerings. That low voltage advantage translates into lower electricity costs. That said, while many manufacturers have taken a look at OLED lighting, most have dropped out due to high production costs. OLED lighting is currently more of a niche product, which has applications in things like automobiles. Eventually, it may find its way into commercial real estate applications, especially if commercial office space developers demand it for the energy savings, but for now, it remains more of a possibility than an actual market.

Growth will continue in this space

As for Universal Display, its revenue grew 26% last quarter, and the stock is trading at about 66 times estimated 2019 earnings. The company's shares were up approximately 120% in 2019 on earnings reports that raised revenue guidance every quarter throughout the year. Universal has licensing agreements with Samsung and LG which last through 2022 and have an extension option and also include commitments to buy materials. As the prices for OLED offerings fall, computer monitors (especially for gamers) come into play as a potential new market to expand into. As this technology transitions from a luxury offering to a more affordable one, Universal's revenue growth will continue (and possibly accelerate).

Given Universal's licensing fee model, most of that growth will drop straight to the bottom line as capital expenditures aren't a major factor. OLED technology simply is a better mousetrap and Universal is poised to benefit regardless of which consumer electronics manufacturer ends up winning the battle for the best product.