Please ensure Javascript is enabled for purposes of website accessibility
Log In Help Join The Motley Fool
Free Article Join Over 1 Million Premium Members And Get More In-Depth Stock Guidance and Research
By Dave Kovaleski – Updated Feb 27, 2020 at 11:37AM

This regional bank has been very active lately.

There's been a lot of M&A activity in the banking industry the past few months. Lost in the shuffle, perhaps, was a sizable merger among regional banks, as First Horizon National (FHN 0.58%) announced a deal to combine with Iberiabank (IBKC) in November.

First Horizon may not have grabbed the headlines, but it's been steadily adding scale through acquisitions. And with a diversified revenue stream and low price-to-earnings ratio, it's a good value stock that you should consider for your portfolio. 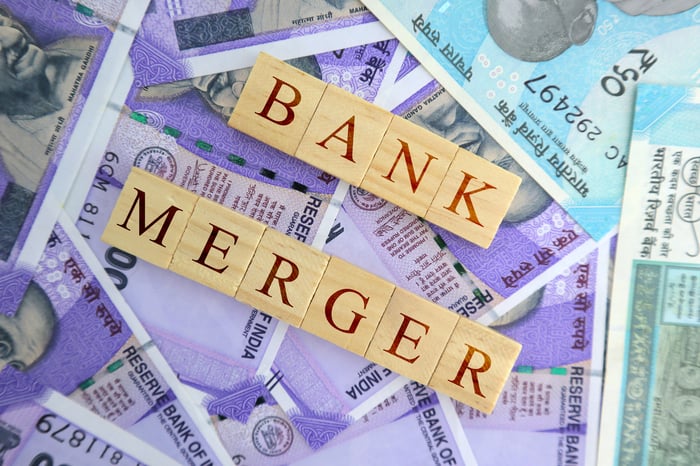 First Horizon has been active on the M&A front. Image source: Getty Images.

The combined company, which will be based in Memphis, will have almost $75 billion in assets under management, with $57 billion in deposits and $55 billion in loans, when the deal closes (that's expected in the second quarter of this year). First Horizon currently has $42 billion in assets under management, while Iberiabank, based in Lafayette, Louisiana, brings roughly $31.7 billion. It will be a top 25 bank in the United States and one of the largest regional banks in the South.

Separate from the Iberiabank deal, First Horizon purchased 30 branches from SunTrust Bank as part of SunTrust's merger with BB&T to form Truist Financial (NYSE: TFC). SunTrust was ordered to sell the branches to satisfy regulatory requirements. The branches are primarily in North Carolina, Virginia, and Georgia.

Overall, total revenue climbed 20% in the fourth quarter compared to the previous year's quarter to $494 million, while net income was up 20% to $121 million. The gains were driven by solid loan and deposit growth and noninterest fee income from the banking side, along with robust gains in the fixed-income business. Despite the lower interest rate environment, net interest income was up 3% in the fourth quarter, year over year, mainly due to loan growth, offset somewhat by the lower interest rate environment.

With rates expected to remain flat and increased market volatility, First Horizon expects the fixed-income business to continue to drive growth in 2020.

Our counter-cyclical business mix helps us to produce solid returns, even in a challenging interest rate environment, such as 2019. Our fixed income business benefited from falling interest rates and market volatility. Fixed-income revenue was up 52% from 2018 to 2019, and average daily revenue was over $1 million in the fourth quarter of 2019.

With similar rates and the potential for greater market volatility in 2020, the company expects fixed income to drive growth again in 2020.

With the integration of Iberiabank coming later this year, First Horizon will gain added scale in a consolidating market. Further, the company expects to generate additional revenue in new markets from the Iberiabank and SunTrust branch acquisitions, while holding down expenses through merger efficiencies. It successfully integrated the purchase of Charlotte-based Capital Bank in 2018 to deliver strong earnings last year, so that track record and experience will serve First Horizon well in incorporating Iberiabank.

Also, the company increased its quarterly dividend in the first quarter of this year to $0.15, marking the sixth straight year it has raised its dividend. It's a good sign of stability. First Horizon is undervalued, with a P/E ratio under 9, so considering its revenue diversification, scale, and new growth opportunities, it's a good value. It should be a solid, steady grower in an increasingly volatile market if you're looking for a solid bank stock.