Please ensure Javascript is enabled for purposes of website accessibility
Log In Help Join The Motley Fool
Free Article Join Over 1 Million Premium Members And Get More In-Depth Stock Guidance and Research
By Daniel B. Kline – Feb 27, 2020 at 10:11AM

It's a novel idea that could steal traffic from the cafe giant.

Panera Bread has never done a very good job with coffee. That makes little sense since the chain is owned by privately held JAB Holdings which owns a variety of coffee brands.

Instead, the cafe chain has always focused on its food making coffee a sort of secondary offering. Now, Panera has a plan to make coffee a key part of its marketing plan and it's doing so in a way that may make Starbucks (SBUX -0.62%) take notice. 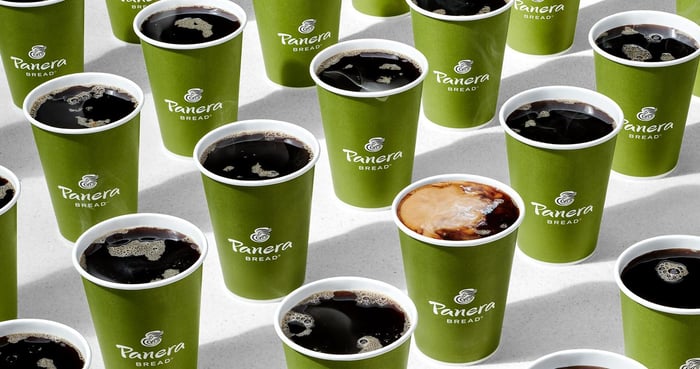 What is Panera Bread doing?

Panera has started offering an unlimited coffee service, Panera+ Coffee. For $8.99 a month members get unlimited access to basic coffee in any size they want as often as they want. Hot tea and iced coffee will also be included in the offer.

Restaurant Brands International's Burger King has a similar $5 offer. The difference here -- and the reason that the Panera offer may concern Starbucks -- is that few people hang out at Burger King, but many use Panera's cafes as third place locations to work or socialize.

This coffee subscription could hurt the public coffee giant in two ways. Some customers may opt for the cheap daily coffee instead of going to Starbucks. Others could decide that Panera's food plus low-cost coffee makes their choice obvious.

Will this hurt Starbucks?

Panera could steal some marginal customers from its rival. The reality is, however, that basics cups of coffee are not Starbucks' bread and butter. The chain's customers order lattes, macchiatos, cold brew, and other drinks with all sort of complicated add-ons. The person who pays $4-6 for those drinks probably won't be enticed by cheap, basic coffee.