Please ensure Javascript is enabled for purposes of website accessibility
Log In Help Join The Motley Fool
Free Article Join Over 1 Million Premium Members And Get More In-Depth Stock Guidance and Research
By Adria Cimino – Feb 27, 2020 at 7:00AM

General Mills hopes its high-quality new product will conquer the cereal market -- but the price tag might be its downfall.

Morning Summit, one of General Mills' newest cereals, is part of the plan. The cereal, chock-full of almonds, pumpkin seeds, and other healthy ingredients, might sound like the perfect recipe for success. But that recipe comes with a $13 price tag. Now the question is: Will consumers be willing to pay that much for a box of cereal? And let's consider that we're talking about a product category that hasn't even been of interest to them in recent years. 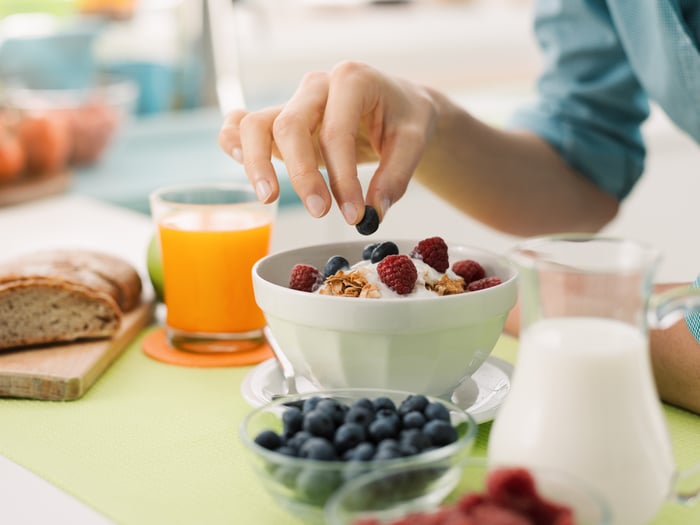 Give cereal another try

For some insight, it's worth a look at why Americans have been turning their backs on cereal in recent years. A big reason is that it's hard to take a bowl into the subway or in the car on the morning commute. According to Mintel research, Americans simply don't have time to sit down for breakfast -- in fact, they often skip it or snack.  The research also showed that only 4 out of 10 breakfast eaters prefer traditional breakfast foods to trendier options. That's more bad news for cereal. Though the report shows that consumers seek healthy options, they also seek convenience. Cereal also has taken a hit from low-carb diet trends. The bottom line is: A bowl of cereal no longer fits into to the lifestyle of many Americans.

That said, a halt in the market's decline might signal change is under way. And that could be an opportunity. According to IBISWorld research, the cereal market declined 0.9% annually from 2014 to 2019 and is currently valued at about $10 billion. Now is a good time for players to introduce offers that may convince shoppers to give cereal another try. Harmening said a stabilization in the number of people eating breakfast in the home versus elsewhere is one reason the market is improving.

General Mills' idea of focusing on healthy ingredients rather than sugary cereals is wise. In an InMobi Pulse survey, 71% of respondents said they prefer a healthy breakfast to one that isn't as healthy, and two-thirds of respondents said they were willing to pay more for it. That's good news for companies charging a premium for expensive ingredients like nuts and dried fruit. The problem with General Mills' Morning Summit is that the price is well beyond that of similar offerings. For instance, a box of Whole Foods' 365 brand Fruit & Nut Muesli goes for less than $5. General Mills could argue that Morning Summit contains more almonds or other expensive ingredients. But that reason might not be strong enough to convince customers to spend more than twice what they would spend on another quality option.

General Mills, which has seen a 2% increase in cereal sales in fiscal 2020 so far, isn't putting all of its eggs in one basket, of course. Its healthy cereal offerings also include GoodBelly Probiotics cereal as well as Basic 4, which each sell for less than $5. And as a leader in the U.S. market, it's in a good position to take advantage of a rebound in cereal.

So what does this mean for General Mills and you?

General Mills told investors at the Feb. 18 event that the company was on track to deliver on its goals for fiscal 2020 (which ends in May), including organic net sales growth of 1% to 2% and adjusted diluted earnings-per-share growth of 3% to 5%.

Morning Summit isn't a reason to buy or sell shares of General Mills. If the company fails to sell enough of it, chances are it won't cause a problem for earnings or share price. And the company as a whole is a big name in packaged foods and consumer staples that would likely benefit from a renewed interest in cereal. That said, to move far ahead of rivals, General Mills is right in its goal to innovate. But it seems unlikely that nuts and dried fruit -- even if better than anything produced by rivals -- will be enough to set the product and General Mills apart. Especially considering the price.

John Mackey, CEO of Whole Foods Market, an Amazon subsidiary, is a member of The Motley Fool’s board of directors. Adria Cimino has no position in any of the stocks mentioned. The Motley Fool owns shares of and recommends Amazon. The Motley Fool has a disclosure policy.