Please ensure Javascript is enabled for purposes of website accessibility
Log In Help Join The Motley Fool
Free Article Join Over 1 Million Premium Members And Get More In-Depth Stock Guidance and Research
By Prosper Junior Bakiny – Feb 28, 2020 at 7:11AM

Spotify’s podcast content strategy could be a major tailwind for the company, but is it a better buy than iQiyi right now?

Music-streaming giant Spotify Technology (SPOT -3.41%) and video-streaming platform iQiyi (IQ -9.03%) have some similarities. For instance, both companies rely on a subscription-based model to make the bulk of their revenue. However, there are also important differences between the two. iQiyi primarily focuses on the Chinese market, whereas Spotify's clientele spans much of the globe.

Year to date, iQiyi has been the better performer, with its shares up by 14.2% since 2020 began, while Spotify's stock is down by 4.1% over the same period. However, iQiyi faces some severe challenges in its domestic market, and it isn't clear whether it can keep up its pace. Which of these two tech stocks will outperform the other from here? 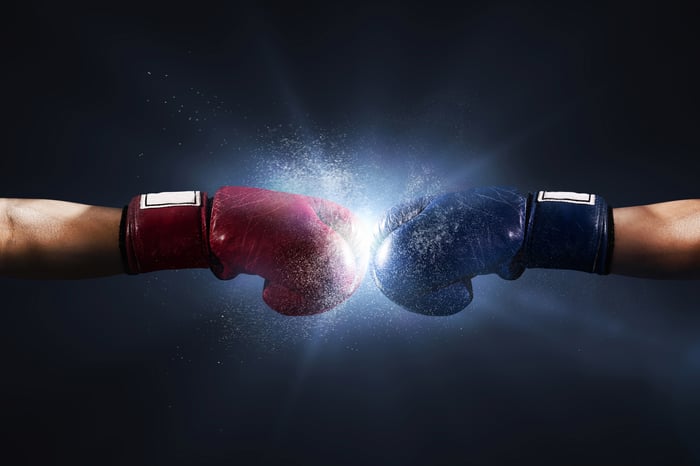 iQiyi is one of the largest video streaming platforms in China, and the company has been adding subscribers at a fast pace over the past few years. For instance, at the end of the third quarter, the company had 105.8 million subscribers (over 99% of whom were paying subscribers), a 31% year-over-year increase. While iQiyi's revenue has historically grown at a fast pace thanks to its soaring subscriber count, the company's top line has hit a bit of a brick wall of late, caused by several issues. The slowdown of the Chinese economy and the trade war tensions between the U.S. and China both played a role in hindering the growth of the company's online advertising business.

During the third quarter, iQiyi's online advertising revenue was $289.2 million, and it decreased by 14% year over year, which the company attributed in part to the "challenging macroeconomic environment in China." iQiyi also faces stiff competition in its domestic market, most notably from Tencent's Tencent Video, a service with which it has been fighting for dominance in the video-streaming space in China. The company has been investing in original content to attract and retain customers, but doing so isn't cheap.

During the third quarter, the company's cost of revenue was $1.1 billion ($870.5 million of which went to content costs), representing 7% year-over-year growth. Increasing costs may be a problem for iQiyi -- which is still not consistently profitable -- especially if the company's top-line growth continues to be hindered by issues in its domestic market.

Spotify has its own set of challenges. Most notably, the company has to contend with both Amazon and Apple in the music streaming industry. Amazon recently announced it had more than 55 million subscribers -- and growing -- on its Amazon Music Service. Meanwhile, Apple boasts more than 60 million subscribers on its Apple Music service. While investors shouldn't ignore the challenges posed by this stiff competition, it's worth noting that Spotify continues to grow its subscribers at a good clip. In fact, during the fourth quarter, the company added 11 million premium subscribers, the most it had ever added in any single quarter.

The fact that Spotify achieved this feat despite already being the largest company in its industry speaks volumes. Further, there are reasons to think Spotify can continue performing well. For instance, the company's podcast content strategy is working wonders.

Spotify will continue to invest in podcast content, and if the company's success in this area so far is any indication, Spotify could continue growing its subscriber count as well as its revenue, especially considering its core business is still performing well.

In my view, Spotify is the better buy at the moment. The music streaming company faces fewer near-term headwinds than iQiyi, and Spotify also has a much broader geographical reach than iQiyi, which operates primarily in China. And given the current issues in the Chinese market, iQiyi's stock faces a lot of uncertainty. For those reasons, I think investors would be better off buying shares of Spotify over those of iQiyi right now.