Please ensure Javascript is enabled for purposes of website accessibility
Log In Help Join The Motley Fool
Free Article Join Over 1 Million Premium Members And Get More In-Depth Stock Guidance and Research
By Evan Niu, CFA – Feb 6, 2020 at 9:30AM

The Swedish company will continue investing heavily in the business in 2020.

This week, paid music-streaming leader Spotify (SPOT -6.78%) reported fourth-quarter results, and they showed that its big bet on podcasts continues to pay off: The company keeps adding paid subscribers and podcast engagement is enjoying "exponential growth." Spotify had spent around $400 million in 2019 to acquire three different podcast start-ups to jump-start that strategy, and the company is now making yet another podcast acquisition.

Here's how Spotify fared in the fourth quarter. 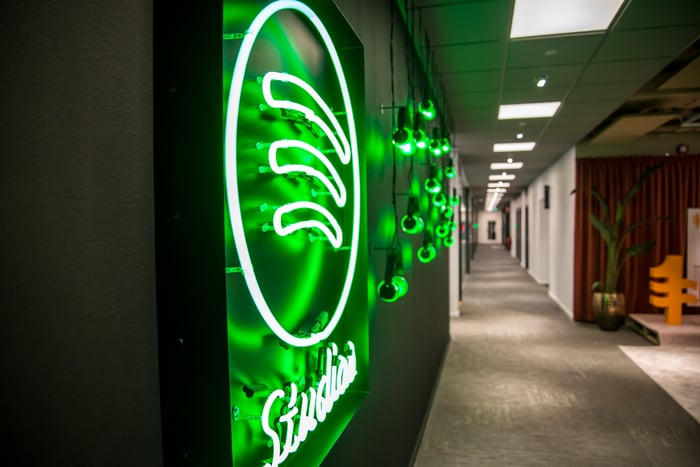 Total revenue jumped 24% to 1.9 billion euros ($2.04 billion), which was slightly below the Street's expectations. As usual, the premium segment represented the bulk of sales -- nearly 90%. Spotify added a record 11 million premium subscribers during the quarter, bringing its total to 124 million. Ad-supported monthly active users (MAUs) increased to 153 million, and there are now 271 million MAUs on the overall platform. 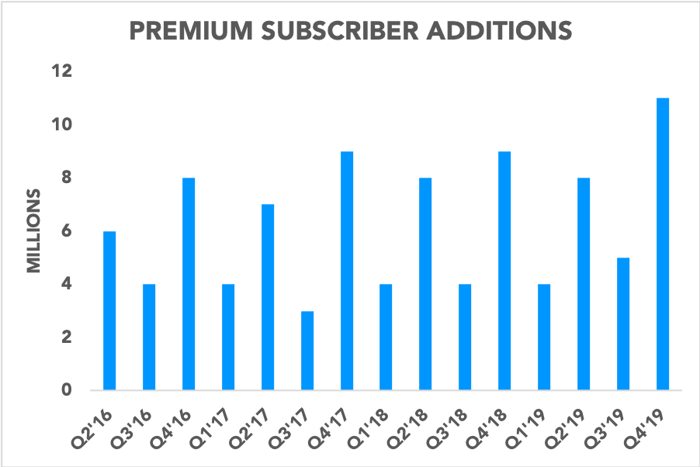 "We continue to see exponential growth in podcast hours streamed (up approximately 200% Y/Y) and are now seeing clear indications that podcast usage is driving increased overall engagement and retention," Spotify wrote in its letter to shareholders. "We have seen early indications that our investments in podcasts are having a positive impact on conversion of free to paid users."

User growth is reaccelerating, even as Spotify already has the largest paid subscriber base in the music-streaming industry. The company has been ramping up promotional activity to fend off Apple and Amazon, two tech giants that are aggressively growing their respective music-streaming businesses. Amazon recently disclosed for the first time that its music business has 55 million listeners, including paid subscribers and ad-supported users across all tiers. Apple's most recent disclosure was when it said last summer that it had 60 million paid subscribers.

Premium average revenue per user (ARPU) declined to 4.65 euros ($5.12). That metric has been trending lower for years due to uptake of family and student plans, but an extended free trial promotion during the quarter also added additional pressure.

Spotify separately announced that it was acquiring The Ringer, which produces sports-oriented podcasts and other content, for an undisclosed sum. The deal is expected to close in the first quarter. That will further strengthen Spotify's catalog of exclusive podcasts. There are now over 700,000 podcast titles available on Spotify (not all of those are exclusive).

The company says that roughly 16% of MAUs engage with podcast content and podcast consumption has nearly tripled. Since Spotify's podcast strategy is so new, it cautions investors that it is still in the process of accumulating data to inform its strategic decisions. That being said, the early insights are very promising, which is giving management confidence that Spotify is embarking upon the right path.

"Any decision to accelerate our investment in podcast and technology spend should be viewed as an indication of our belief that our strategy is having tangible results," the company wrote. "We have gained even more confidence in the data, particularly around the benefits from podcasts, and as a result, 2020 will be an investment year."

Spotify expects to finish 2020 with 143 million to 153 million premium subscribers.