Please ensure Javascript is enabled for purposes of website accessibility
Log In Help Join The Motley Fool
Free Article Join Over 1 Million Premium Members And Get More In-Depth Stock Guidance and Research
By Keith Speights - Feb 28, 2020 at 7:00AM

The biotech topped Wall Street estimates, but the real focus was on its pipeline.

It's been a wild ride for shareholders of Nektar Therapeutics (NKTR -2.37%) so far in 2020. The stock got off to a great start, soaring more than 20%. But Nektar gave up all of those gains and then some after two U.S. Food and Drug Administration (FDA) advisory committees voted against recommending approval for experimental pain drug oxycodegol.

Nektar announced its fourth-quarter results after the market closed on Thursday. Investors seemed to have liked what they heard, with shares up around 6% in after-hours trading. Here are the highlights from Nektar's Q4 update. 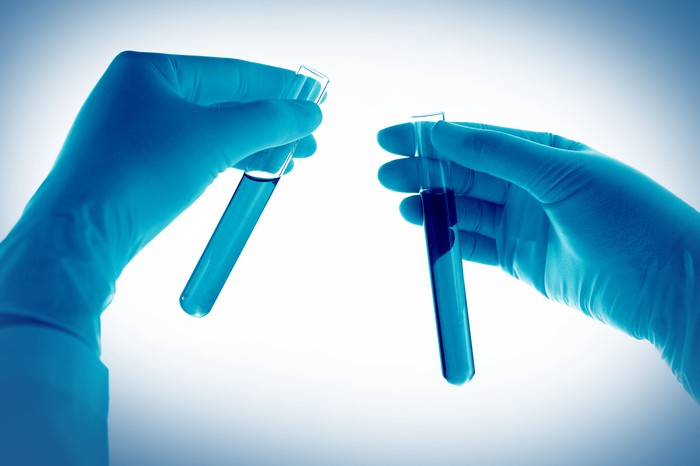 Nektar reported revenue in the fourth quarter of $33.9 million. Although this reflected a year-over-year decline of 15%, it topped the average analysts' Q4 revenue estimate of $26.93 million.

Nektar ended the fourth quarter with cash and investments in marketable securities of $1.6 billion. This wasn't too far below the company's cash stockpile of $1.9 billion as of Dec. 31, 2018.

Nektar's license, collaboration, and other revenue totaled $7.1 million in Q4, less than half of the $14.4 million posted in the prior-year period. This was partially offset by an increase in product sales to $5.8 million from $4.4 million in Q4 of 2018.

The company reported total operating costs in Q4 of $143.5 million, only a little higher than the $140.1 million announced in the same quarter last year. This increase stemmed primarily from higher research and development costs and general and administrative expenses.

Nektar also achieved pipeline progress in the fourth quarter. The biotech presented results from preclinical studies of NKTR-255 in treating hematological malignancies and updated results from a phase 1a study of NKTR-358 in treating autoimmune and inflammatory diseases. It presented new data from the Pivot-02 phase 2 study of bempegaldesleukin in combination with Bristol Myers Squibb's (BMY -1.17%) Opdivo.

The company also initiated a phase 1 study evaluating NKTR-255 in treating relapsed or refractory non-Hodgkin lymphoma or multiple myeloma. Nektar's partner, Eli Lilly (LLY -1.29%), kicked off two phase 1b clinical studies for NKTR-358, one focused on psoriasis and the other on atopic dermatitis.

As is the case with many biotech stocks, pipeline progress is the most important thing to watch with Nektar Therapeutics. The company's amended agreement with Bristol-Myers Squibb expanded the number of targeted indications for the bempegaldesleukin-Opdivo combo to five. Success in at least some of these studies is critical for Nektar.

Look for additional milestones for NKTR-358, as well. Eli Lilly should initiate a phase 2 study of the drug in treating lupus, as well as start an additional phase 2 clinical study targeting a new autoimmune indication in 2020.