Please ensure Javascript is enabled for purposes of website accessibility
Log In Help Join The Motley Fool
Free Article Join Over 1 Million Premium Members And Get More In-Depth Stock Guidance and Research
By Will Healy - Feb 28, 2020 at 8:22AM

Unexpected leadership changes and elevated valuations call the value proposition for this SaaS company into question.

salesforce.com (CRM 7.44%) has brought both disappointment and pleasant surprises to investors in its time as a public company. As the software-as-a-service (SaaS) stock that arguably pioneered the SaaS industry, Salesforce continues to deliver from a revenue and earnings perspective. However, an unexpected co-CEO departure led to a stock price drop following the earnings report released earlier this week. While leadership changes bring uncertainty, the real concerns with the growth trajectory of Salesforce stock actually lie with its financials.

Salesforce reported fourth-quarter fiscal 2020 revenue of $4.85 billion, a 35% increase from the same quarter last year when the company brought in $3.6 billion. Salesforce posted earnings of $0.66 per share on a non-GAAP basis. Wall Street had expected $0.56 per share. Despite the earnings beat, the EPS was actually down from the year-ago level of $0.70 per share. On a GAAP basis, the company posted a $0.28 per-share loss, which missed estimates calling for a $0.03 per share loss.

The company lifted its revenue outlook for the year. Fiscal 2021 revenue guidance increased to the range of $21 billion to $21.1 billion. This represents a $200 million increase from the previous forecast. 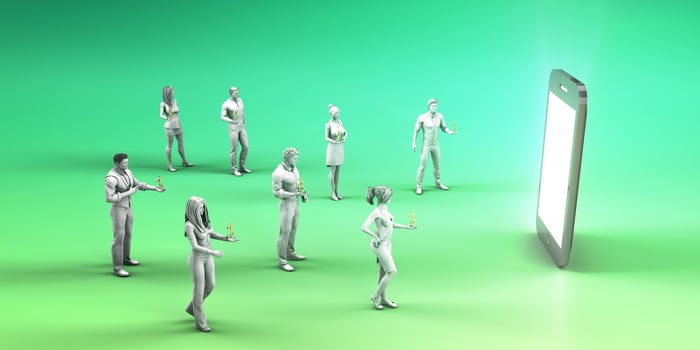 However, changes in the C-suite overshadowed these numbers as co-CEO Keith Block announced his departure. Block had held the co-CEO job since August 2018. Block will stay with the company as an advisor; however, his resignation makes co-founder Marc Benioff the sole CEO of the company.

This news seems strange when Salesforce appears on top of its game. Revenue quadrupled since Block joined the company in 2013. Moreover, Salesforce stock has moved steadily higher since it hit a short-term bottom in early 2016. For these reasons, many had seen him as a possible successor to Benioff.

Such a departure leaves a lot of questions unanswered. Admittedly, placing the company in the hands of its co-founder relieves some of the anxiety that comes with this unexpected CEO change. Also, several analysts either reiterated or raised their price targets on Salesforce stock. All of this suggests the surprise resignation will be a short-term negative at worst.

However, issues with Salesforce's valuation may be more than just short-term. The rising revenue and earnings numbers over the years have helped fuel a massive increase in the stock price. Though Wall Street expects earnings growth to slow, analysts still expect to see 19.04% average annual profit increases for the next five years. Today, Salesforce stock trades at a forward P/E ratio of over 54 and a P/S ratio of 8.6. 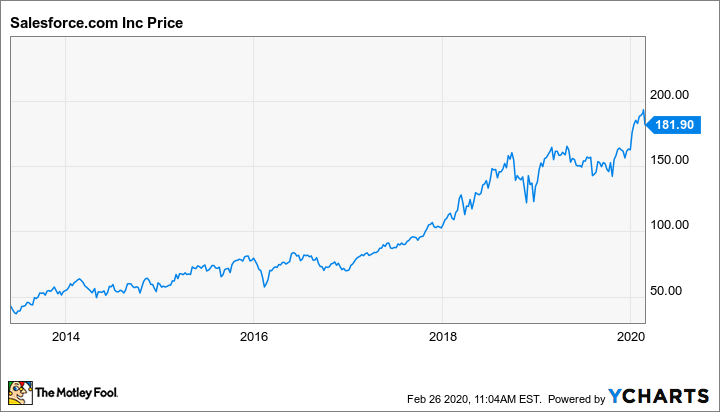 This has taken the expected price-to-earnings-to-growth (PEG) ratio to 2.71. When it comes to the PEG ratio, analysts generally consider stocks with PEGs over 1 expensive.

Certainly, Salesforce stock is not the only SaaS stock to sell for a high multiple. Investors need only point to the likes of Twilio (P/E=357 and P/S=12.7) and Okta (P/S=23.5), or even large players such as Amazon (P/E=64.1 and P/S=3.4), to show that other cloud stocks trade at elevated valuations.

Moreover, this also does not change the long-term trajectory of Salesforce stock. The company continues to lead the SaaS industry and bolster its offerings with acquisitions. Its latest purchase is Vlocity, a provider of industry-specific cloud platforms, for $1.33 billion. This and subsequent purchases should help Salesforce continue its revenue and earnings growth.

However, investors may need lengthy time horizons. At a market cap of about $157 billion, Salesforce is no longer a start-up. This size makes it harder to maintain the 45.9% average annual earnings increases it posted in the previous five years. It also leaves growth prospects for the short term uncertain and may limit potential future returns.

Leading the way in the SaaS industry, Salesforce continues to beat estimates and post significant growth numbers. However, the increased popularity of the stock has taken its multiples to elevated levels. This leaves the stock more vulnerable to downward moves, particularly in light of the unexpected resignation of Block. Although none of this will likely compromise the long-term growth of Salesforce, investors may face a long wait before they see significant returns.