Please ensure Javascript is enabled for purposes of website accessibility
Log In Help Join The Motley Fool
Free Article Join Over 1 Million Premium Members And Get More In-Depth Stock Guidance and Research
By Royston Yang – Updated Feb 28, 2020 at 10:56AM

Deckers is trading at a discount compared to other footwear and apparel giants, yet it continues to post strong multiyear growth after a restructuring.

It hasn't been often in the past year or so that a legitimate bargain has emerged in the stock market, but we might have one today in the form of Deckers Outdoor (DECK -0.59%). The company owns a portfolio of leading fashion and performance lifestyle brands such as Ugg, Koolaburra, Hoka, Teva, and Sanuk, and it has been expanding its brand and product presence within the U.S. over the past few years.

Deckers' stock price hit an all-time high before the market's current sell-off and has more than doubled over the past five years. The improvements it's made in its business lately suggest the market is right to be impressed. Yet the stock still appears cheap in many respects, and I think this is a good time to take a look. 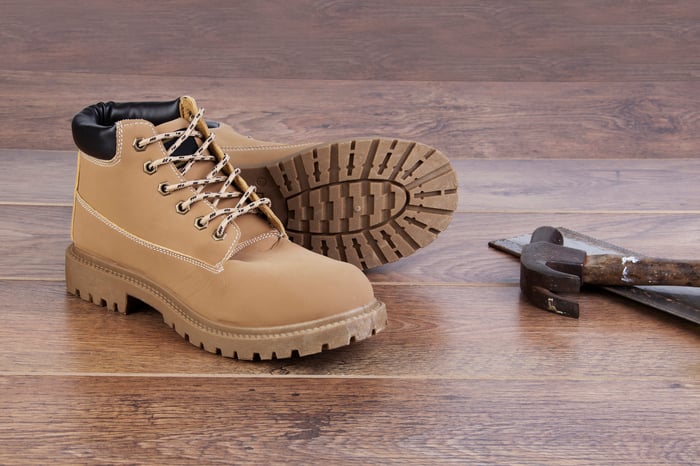 Deckers underwent a restructuring back in February 2016 to rightsize its operations and set a new tone for strategic direction. The aim of this exercise was to improve on gross margins, reduce the company's overall cost structure and to eliminate underperforming brands. So the company split its brands into two major segments: Fashion Lifestyle (UGG and Koolaburra) and Performance Lifestyle (HOKA, Teva and Sanuk). The company also relocated its Sanuk brand operations from Irvine, California, to corporate headquarters in Goleta. A total of 24 retail stores were identified for closure in order to reduce the store count to a more manageable level. Though these writedowns and impairments took a short-term severe toll on Deckers' financials (as you'll see in the graph below), it helped to reduce the company's cost base and streamline operations for future growth . 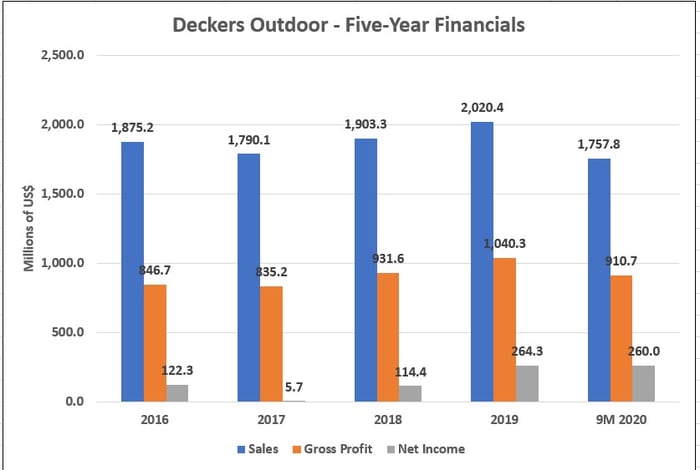 You can see in the graph above that while net income took a severe hit in fiscal 2017 due to impairment charges of $138.2 million incurred by the Sanuk brand for segment goodwill and patent writedowns, it has climbed up steadily and strongly since then to hit a four-year high of $264.3 million in fiscal 2019. With the first nine months of fiscal 2020 already registering net income of $260 million, Deckers is on track for a fourth consecutive year of revenue and net income growth, and it should see its net income hit a five-year high as well. Gross margin has shown continuous improvement during this stretch, growing from 45.2% in 2016 to 51.8% in the first nine months of fiscal 2020.

CEO Dave Powers articulated Deckers' successful brand strategy in the company's latest earnings call. The diversification of Ugg men's product line has brought about strong growth, with a roughly 30% increase in purchasing on ugg.com among consumers 18 to 34 years old. Menswear is also contributing more toward the company's overall sales mix.

The Koolaburra brand also registered record-breaking revenue on the back of strong marketing, attractive product offerings, and effective consumer targeting. Deckers introduced men's and toddlers' assortment for the first time for its Koolaburra brand, and these products sold well through distributors' channels. These initiatives demonstrate that the right marketing mix for apparel can result in strong, sustainable growth.

For the direct-to-consumer (DTC) channel, comparable sales grew 5%, driven by e-commerce initiatives and the strength of both the Ugg and Hoka brands. With such strong numbers, Deckers has revised its full-year revenue guidance for fiscal 2020 to 6% to 7% year-over-year growth, as its strategies continue to bear fruit.

A cheap stock relative to rivals

Deckers is cheap compared to its larger peers such as Nike, lululemon athletica, and Under Armour. The stock trades at just around 17 times earnings, while Nike trades at 30 times, Lululemon at 50 times, and Under Armour at a whopping 68 times. If you consider the fact that growth in its underlying brands has been consistently high since Deckers' restructuring in 2016, this provides an even stronger reason to want to own the stock.

Though an economic downturn might squeeze demand for lifestyle and performance footwear, Deckers' affordable products and wide portfolio of brands should allow it to weather through a crisis. With $616.9 million in cash, and debt of just $6.6 million, it should be able to emerge relatively unscathed.