The third-party delivery app wants customers to keep coming back for more food.

Grubhub (GRUB) is hoping a new member loyalty program will keep its "promiscuous" customers more chaste and loyal, which in turn will help stop the decline in its market share.

The meal delivery specialist is launching its new Grubhub+ monthly subscription program, which is similar to Amazon.com's (AMZN 2.07%) Prime service in that members will enjoy free, unlimited food delivery from partner restaurants for a fee of $9.99 per month. 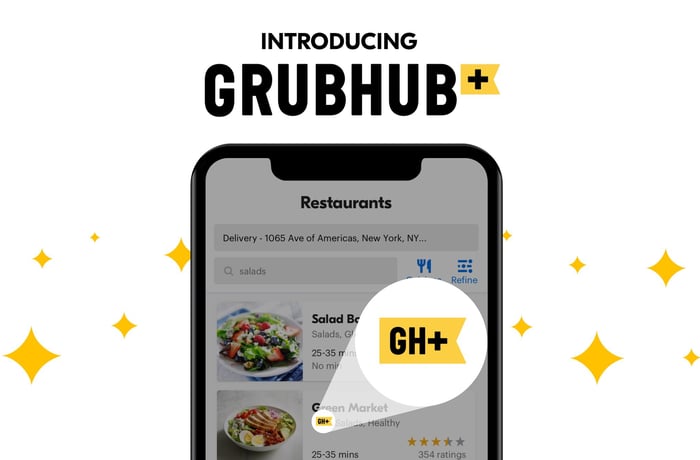 Grubhub is also offering 10% cash back on every delivery, meaning the service will pay for itself if $100 per month in food is delivered. Other benefits of Grubhub+ include:

Many companies are launching subscription services in an attempt to make business more sticky with customers, but Grubhub+ doesn't seem likely to change Grubhub's downward trajectory.

Grubhub CEO Matt Maloney has stated there was no loyalty anymore to food delivery apps, that "promiscuous" customers were using several different services when ordering out, depending upon the food they wanted. Data analytics firm Second Measure confirmed after reviewing anonymized credit card data that about one-fourth of all food delivery customers used more than one service when ordering.

It's the fatal flaw in the Grubhub+ subscription rationale. People don't care who delivers their food, just that it is delivered quickly. The prospect of paying $10 a month for a service they might not use, depending upon what dining mood strikes them, may not appeal to customers.

For Grubhub+ to actually work, the delivery specialist would need to be the delivery partner of a much broader range of restaurants and takeout joints than it currently is.

More than it seems

Investors recently punished Shake Shack (SHAK 2.27%) for agreeing to be exclusive to Grubhub instead of the multiple providers it used before because Grubhub isn't the delivery leader in many of the markets the fast-casual burger chain operates in. Shake Shack investors see that as potentially limiting sales.

Grubhub is attempting to get around the problem of limited coverage by adding so-called shadow listings, or putting restaurants it has no relationship with on its site. Many times the restaurant doesn't know its menu is available on the delivery app; it may not even offer delivery.

While Grubhub was late to the shadow listings game, a company spokesperson told Nation's Restaurant News that because rivals like DoorDash and Postmates were doing it, it was joining in. "We're trying this as a way to close the restaurant supply gap and drive more delivery orders to local restaurants."

However, there are other problems with the subscription program. The CEO of pizza giant Domino's (DPZ 2.01%), which has long resisted using third-party apps, told analysts recently that third-party delivery apps were engaged in a "circular firing squad," taking shots at one another by being overly promotional, which was hurting their bottom line.

Grubhub went out of its way when announcing Grubhub+ to say it was the only profitable delivery app, but Maloney also seemed to underscore Domino's point when he noted, "We are leveraging our profits to stay laser-focused on having the most restaurants in the network and giving away as much free food as possible."

Grubhub just reported a fourth-quarter GAAP loss of $0.30 per share, worse than the $0.06-per-share loss it reported last year. Even on an adjusted basis, the food delivery specialist lost $0.05 per share compared to profits of $0.19 per share last year. And full-year adjusted profits are down over 80% from three years ago, suggesting giving away lots of free food won't bolster the bottom line.

Part of Domino's recent problems has been that pizza used to be the only delivery game in town, but now it is going up against virtually every kind of cuisine because of the proliferation of third-party delivery.

The delivery industry is suffering from the same sort of malaise because the explosion of competitors on the market makes it difficult for any one service to stand out, let alone be profitable.

The profusion of options makes even the illusion of coverage offered by shadow listings a difficult hurdle to overcome, and they may not be enough to entice consumers to sign up for a service they don't use often enough to make up the cost.