Please ensure Javascript is enabled for purposes of website accessibility
Log In Help Join The Motley Fool
Free Article Join Over 1 Million Premium Members And Get More In-Depth Stock Guidance and Research
By David Haen - Feb 29, 2020 at 8:07AM

More babies are born in summer and early fall than other times of year, meaning mothers-to-be are likely undergoing prenatal testing now. Can investors profit? 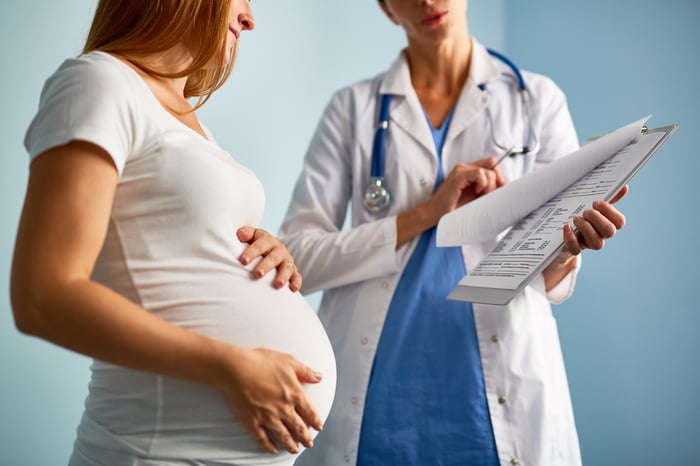 Approximately 4.2 million pregnancies occur annually in the United States. Of those, 0.8 million are classified as high-risk, and the remaining 3.4 million as average risk. Diagnostic companies, big and small, have developed tests to look for potential genetic conditions in both the carrier (parent) and the unborn child. Myriad Genetics (MYGN 0.27%) and Natera (NTRA 6.51%) lead the field in the development and marketing of diagnostic tests for reproductive health.

Myriad Genetics offers a suite of molecular diagnostic tests across a variety of disease areas, including oncology, neuroscience, autoimmune disease, urology, dermatology, and women's health. Prenatal testing, which falls under women's health, aims to detect whether a baby is at risk for a genetic condition.

Myriad entered the prenatal testing universe through its $375 million acquisition of Counsyl, announced in May 2018. Myriad claimed that Counsyl's Foresight test had the highest detection rate of any commercially available test, and provided actionable results for more than 175 conditions.

However, Myriad blamed its prenatal testing division for its recent earnings miss. Prenatal testing revenue in the most recent quarter came in 47% lower than the same quarter last year.

Management explained that the shortfall was due to a switch in the billing system from the legacy Counsyl platform to an industry-standard system used by Myriad. Management also noted "recent payer headwinds" as sales fell year-over-year across several business lines, although not to the degree of prenatal testing.

While Myriad bought its way into prenatal testing, Natera was founded upon it, and then expanded into other areas like oncology and transplants. Natera currently serves the majority of high-risk patients in the U.S., and aims to expand its market share among average-risk patients.

Natera further noted that Myriad only had three peer-reviewed publications following studies of more than 145,000 patients. 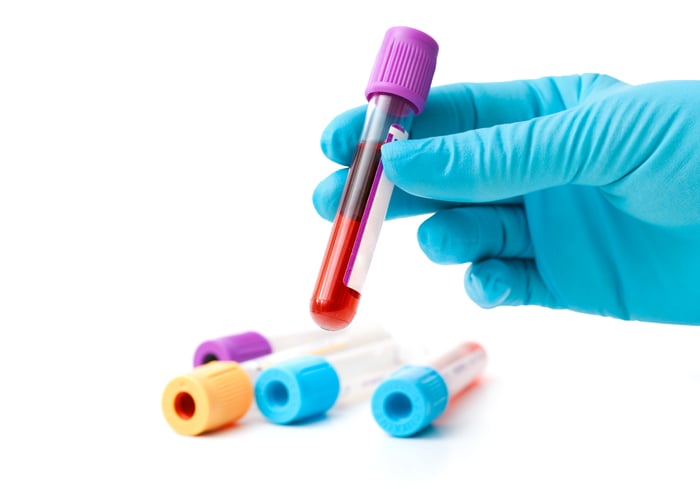 Over the past year, Myriad and Natera have moved in opposite directions. At the start of February, Myriad's stock was down only 4% from the prior year. However, it missed its earnings on Feb. 6, and the CEO resigned, triggering a massive 40% sell-off.

Meanwhile, Natera's stock gained more than 110% for the year. Investors currently value Natera just shy of $2.7 billion, while Myriad is roughly half of that, at $1.33 billion.

Myriad expects revenue of $735 million in its 2020 fiscal year. It already posted revenue of $381.4 million through the first two quarters. The guidance basically means the next two quarters will generate less in sales than the past two. That's a worrisome trend for investors, particularly with lower sales across several products.

Natera announced guidance for 2020 sales to range from $335 million to $350 million. Unfortunately, expenses continue to outpace revenue. Natera further guided it will have a net cash burn of $125 million to $150 million. That means it's losing over $30 million a quarter.

Despite that burn rate and half the projected 2020 sales of Myriad, Natera's current valuation is double Myriad's market cap. Investors value the 17% growth in revenue year-over-year and expect the growth to continue going forward.

As an additional reference point, one can look at another precision oncology company: Guardant Health (GH 4.03%). It provided guidance for 2020 that it will generate $275 million to $285 million in sales with a net loss of $155 million to $160 million. That's not too dissimilar from Natera's guidance. Guardant, however, currently boasts a market cap over $8.6 billion, more than three times Natera's.

Both Myriad and Natera aim to capitalize on the trend toward greater personalized medicine. Diagnostic tests will allow for earlier and more precise detection and monitoring of genetic conditions and diseases, and enable the selection of interventions more likely to work for specific patients. In theory, this should be more cost-effective and streamline patient care, reducing the number of patients who receive drugs with little chance of helping them.

Investors in healthcare stocks should be aware of the many challenges facing these companies. Besides competing products, reimbursement for the diagnostic tests remains a key challenge that must be addressed to achieve commercial success. Both companies expect to lose money despite generating hundreds of millions in sales.

As a broad investment theme, I like personalized medicines. That said, there are many diagnostic companies, including ones that are profitable, which investors may want to consider. Myriad and Natera will most likely succeed over the long term, in my opinion, making them appropriate for investors with a longer investment horizon.