Please ensure Javascript is enabled for purposes of website accessibility
Log In Help Join The Motley Fool
Free Article Join Over 1 Million Premium Members And Get More In-Depth Stock Guidance and Research
By Rick Munarriz - Mar 1, 2020 at 7:00AM

It's going to be a big month for the media giant, with a new ride, a pair of important theatrical releases, and a big deadline to meet.

Disney (DIS 1.84%) has had a pretty wild February. The surprising resignation of Bob Iger as CEO and the market's general sell-off on concerns over the widening global reach of the coronavirus outbreak have sent shares of the media giant to a 10-month low.

The correction is real, and now we can shift to March and see if catalysts and important milestones can help turn investor sentiment around. Let's go over a few dates Disney shareholders can't afford to overlook. 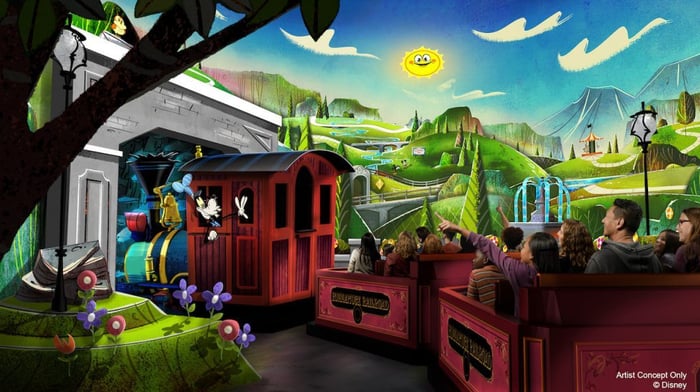 The very first Mickey Mouse-anchored ride opens in Florida on Wednesday. Despite its roller coaster-like name, Mickey & Minnie's Runaway Railway is a tame family-friendly ride that will open at Disney's Hollywood Studios at the site of the former The Great Movie Ride attraction. It was supposed to open last year, but Disney pushed it out early 2020.

Hollywood Studios was dead last among Disney's four theme parks in Florida in 2018, but that should change with the latest addition that follows the 2018 opening of Toy Story Land and last year's debut of Star Wars: Galaxy's Edge. There's a lot riding on the new ride, especially since it will also open at the original Disneyland park in California come 2022.

Pixar's latest release, Onward, hits theaters next weekend. Disney's slate of releases in 2020 is widely expected to underperform its 2019 titles, but there's nothing wrong with low expectations. Pixar is fresh off another Oscar win for Toy Story 4. It has dominated the Best Animated Feature category, with seven wins over the past 12 years.

There is a risk here, as Onward is an original franchise, but that also means there's much to gain in sequels and consumer-products sales, if the suburban fantasy film about two teenage elf brothers on a quest for good fortune is a hit. Multiplex attendance continues to drift lower, but a feelgood flick with broad appeal should always be able to find its audience.

Disney has been cashing in on many of its animated classics by rebooting them as live-action films, and in a few weeks it will be Mulan's turn to see if it can keep the formula going. Mulan wasn't as successful in its initial run as The Lion King, Beauty and the Beast, and Aladdin -- three recent Disney reboots -- but the entertainment market in Asia has expanded dramatically since the animated Mulan hit theaters in 22 years ago.

One thing to watch is that Disney is releasing the two family-targeted films just three weeks apart. Disney has a lot of organic and acquired content in its arsenal, so sometimes it can't help bunching its theatrical offerings together. It will be interesting to see if Onward takes off, and if the arrival of Mulan later in the same month hurts its eventual returns.

Disney's domestic theme park business is tracking the progress of the coronavirus outbreak closely, but COVID-19 has already had a devastating impact on the two Chinese resorts in which Disney holds a significant minority stake. Hong Kong Disney and Shanghai Disneyland have been closed since late January in an effort to contain the deadly virus, and it will leave a mark on Disney's financial performance.

Disney revealed in early February that it expects to take a $175 million charge -- $135 million for Shanghai and $40 million for Hong Kong -- for the temporary closure of its resorts. The important caveat is that this is the figure for the current quarter. If the parks remain closed after the end of this month, it will mean another hit for the fiscal third quarter and beyond.

In short, if the shortest month of the year was wild for one of the market's most beloved blue chip stocks, one can expect more of the same in March. There's too much happening for the global media juggernaut to ignore.