Please ensure Javascript is enabled for purposes of website accessibility
Log In Help Join The Motley Fool
Free Article Join Over 1 Million Premium Members And Get More In-Depth Stock Guidance and Research
By Rick Munarriz - Feb 27, 2020 at 11:55AM

The media giant hasn't traded this low since the springtime of last year, and a lot has changed for the better and the worse.

Shares of Disney (DIS 2.80%) have been sliding lately, and they have now fallen to their lowest levels since mid-April of last year. The recent headwinds are clear. The market in general is correcting, so why wouldn't the House of Mouse go with the flow? The surprising withdrawal of Bob Iger as CEO this week -- even if he's not totally leaving the company until the end of next year -- is a jarring event.

We obviously also have the coronavirus fallout in play, and unlike other market bellwethers talking about potential supply chain disruptions or future hits, Disney is feeling the pinch right now. Its theme park resorts in Shanghai and Hong Kong have been shuttered for more than a month, and Disney warned that it will take a $175 million charge during the current quarter as a result of the closures.

However, a lot of things have also gone right for Disney over the past 10 months. There's never a dull moment when it comes to Disney stock, so let's weigh the good and the bad to see if Disney is a better company and investment than it was in the springtime of last year. 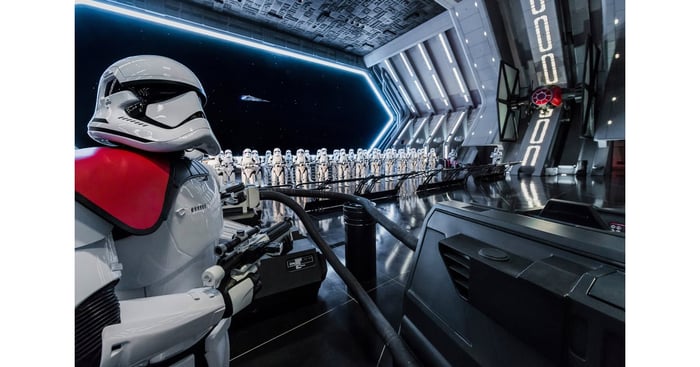 Early into this month's Disney sell-off, the bullish battlecry was that the stock had dropped below where it was on Nov. 12 of last year, the day it launched Disney+. The streaming video platform is a hit, armed with 28.6 million subscribers in just a couple of months of service.

The actual launch has always been an odd place for investors to draw a starting line in this race. The real date that mattered on Wall Street was the afternoon of April 11, when Disney actually unveiled the platform. It was that media event which lit a fire under the stock, as the market began to see Disney with fresh eyes. The impressive content on Disney+ and its surprisingly accessible pricing turned heads, pushing the stock to a market-thumping performance in 2019 long before the actual service went live for consumers.

Well, we've gotten to the point that Disney stock is now back to where it was earlier on the day of its April 11 Disney+ event. It's now fair to say that the market has fully discounted the success of Disney+. We've also seen Disney go on to reverse the attendance trends at its Disneyland and Disney World parks in the U.S., a sticking point for bears in the summer of last year. Disney's studio would also go on to put out the country's six highest-grossing films of 2019.

Things aren't perfect. The success of Disney+ will inevitably come at the expense of its older media networks. This year's theatrical slate is not going to live up to last year's hype. New CEO Bob Chapek will have to earn the helm in the eyes of investors. If the coronavirus isn't contained soon, it will be Disney's theme parks, cruise ships, and retail stores taking a bigger hit. It's still hard to deny that Disney is one of the market's shiniest blue chip stocks. No one has a better pulse on what the masses crave when it comes to entertainment than Disney, and right now -- in these uncertain times -- entertainment and escapism mean everything. Disney is a bargain at this 10-month low.